FERC filed a request for comments Thursday on a pair of route variations for the Atlantic Sunrise expansion proposed by Williams Partners’ Transcontinental Gas Pipe Line Co. LLC (Transco), raising speculation in the market that the project could be delayed. 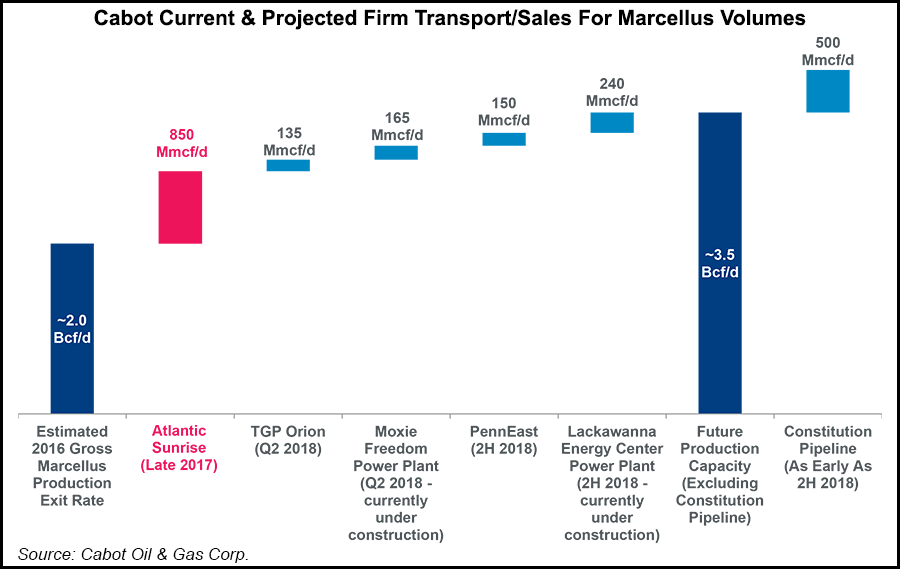 The prospect of a delay would create plenty of discomfort for Marcellus producers such as Cabot Oil & Gas Corp., an anchor shipper waiting on 850 MMcf/d in new takeaway capacity promised by Atlantic Sunrise.

The stock market reacted quickly to Thursday’s filing, dropping share prices of Williams and Cabot, but a Federal Energy Regulatory Commission analyst said a long delay was not likely and the market appeared to be overreacting.

The FERC’s Office of Energy Projects filed a letter in the Atlantic Sunrise project docket [CP15-138] Thursday seeking input on alternatives for the Central Penn Line (CPL) North and South segments of the Marcellus-to-Southeast expansion.

FERC set a Nov. 14 deadline for comments on the alternatives, which helped to generate a stir in the market as it raised the prospect of a delayed EIS and certificate decision. Share prices of Williams and Cabot saw noticeable declines following the news.

Shares of Williams Partners (WPZ) were trading close to $37 Thursday before taking a dip as news of the FERC filing circulated. WPZ traded as low as $35.97/share Thursday before closing at $36.16 on Friday. Williams Companies Inc. (WMB) fell from a midday high of $30.16/share to as low as $29.09 in late Thursday trading. WMB closed at $29.13 Friday.

Cabot (COG) shares were trading around $24 Thursday before a sharp drop to as low as $22.59/share late Thursday. COG closed Friday’s trading at $22.56.

“Trading activity on both stocks was heavy during the last hour of trading, as you can see by the two intraday trading charts from Thursday,” said NGI’s Patrick Rau, director of strategy and research. “According to statistics from Yahoo Finance, the average daily volume for COG during the last 3 months was 5,900 shares. COG saw more than 335,000 shares change hands yesterday. Similarly, WMB (using WMB, not WPZ) averaged just 10,100 shares per day over the previous 3 months, but registered 89,400 in volume Thursday.

“Any delay in Atlantic Sunrise would impact COG much more than it would WMB, so it’s not surprising COG saw a far greater spike in volume relative to its daily average.”

“The two alternative routes that are being evaluated include a potential 1.4 mile deviation, in aggregate, from the currently proposed route,” the Houston-based exploration and production company said. “…Cabot anticipates that the FERC will issue an updated notice of schedule in a timely manner, which should address the updated timeline for the issuance of the final environmental impact statement.”

Williams spokesman Lance Latham said in a statement Thursday that the company “is in the process of evaluating any potential impacts to the project schedule. At this time, absent a formal updated schedule of environmental review from FERC, it would be premature of us to speculate on the full extent of any possible regulatory delays.”

During the Barclays CEO Energy-Power Conference in New York last month, Cabot CEO Dan Dinges highlighted the 850 MMcf/d in incremental capacity on Atlantic Sunrise as an “inflection point” that would “allow us to embark on another growth profile.”

With at times brutal basis differentials, Appalachian Basin producers have had to contend with what Dinges described as “an extreme amount of gas-on-gas competition,” making the new capacity on Atlantic Sunrise critical to Cabot’s outlook.

“When you look back at Cabot and the assets we have…in the Marcellus, we had the ability to grow at the pace we chose, and we were successful doing that in a very efficient manner,” Dinges said during the Barclays conference. “As the activists became part of our business, infrastructure became an issue. We slowed our operations down, managed the balance sheet, continued to grow, but maybe not at the pace we might have enjoyed.

“We have been in what I would call a three-year delay,” he said. “It’s kind of like having a Ferrari and having to drive through a school zone for three years.”

An analysis from Washington, DC-based ClearView Energy Partners LLC published late Thursday suggested that the market may have overreacted to the FERC filing.

“It appears today’s letter to landowners requesting comment on slight route alterations…stoked fears that substantive regulatory delays may lie ahead,” ClearView wrote. “…If the delay to the publication of the final EIS proves to be a short one, as our evaluation of the docket suggests, we expect the pipeline could receive its [certificate] in the December 2016-February 2017 time frame.

“While not necessarily routine, the FERC occasionally delays the finalization of the environmental documents required by the National Environmental Policy Act (NEPA). We do not consider such an event to be particularly rare or alarming, in fact we have noticed that their incidence may be increasing slightly…we do not see any ”showstoppers’ in the docket at this time.

“We think that a shift in the project’s review schedule may be 30 days, and potentially less.”

Williams’s timeline for the project anticipates a FERC certificate sometime in early 2017 with a target in-service date in late 2017.