A group of business leaders in the Appalachian Basin have launched another economic development initiative to attract global attention and top energy-consuming businesses to the Mid-Ohio Valley to take advantage of some of the industrialized world’s lowest natural gas prices. 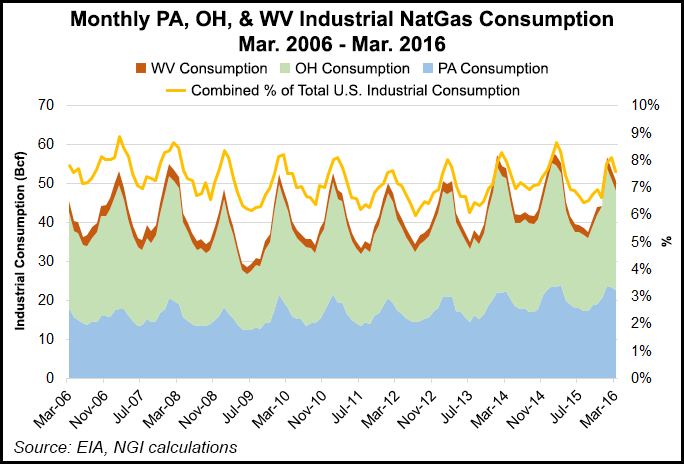 The advent of prolific production from the Marcellus and Utica shales, combined with abundant water resources, a skilled labor force and proximity to major North American population centers makes the Mid-Ohio Valley — a region near the Ohio River that includes parts of Ohio, West Virginia and Pennsylvania — a global competitor for more high-paying, blue collar manufacturing jobs, the group said.

The group, called Shale Crescent USA, would attempt to brand the region as such to attract more economic attention to what it believes is one of the lowest-cost places to do business, with the rise of the nation’s largest shale gas play in the Marcellus and one of its fastest growing in the Utica.

“The world has really changed dramatically when it comes to where natural gas production is located in this country,” said Shale Crescent member and CEO of Ohio-based Artex Oil Co. Jerry James. “We’re trying to change the conversation” about how the Mid-Ohio Valley stacks up economically against the world’s leading energy centers on the Gulf Coast and overseas.”

Shale Crescent launched the initiative on Thursday at a public event in Washington County, OH, near the Utica Shale’s epicenter. The group’s members also hosted a conference call with reporters to answer questions about their forthcoming work. They said a study they conducted shows that some of the world’s lowest gas prices are in the Mid-Ohio Valley.

The launch came just days after a unit of Royal Dutch Shell plc made a historic decision to build a multi-billion dollar ethane cracker in Western Pennsylvania to take advantage of cheap feedstock from the Marcellus and Utica (see Shale Daily, June 7). That facility would be built on a 400-acre site next to the Ohio River in Beaver County, PA. The company said it expects to employ 6,000 people during construction and another 600 once it’s operational sometime in the early 2020s. It is also one of five crackers that have been proposed for the Appalachian Basin in recent years.

“When somebody thinks of building a large petrochemical plant, they think Ohio, West Virginia and Pennsylvania,” James said. “One of the biggest announcements, and we think it’s just great, was that Shell, one of the largest oil companies in the world and an integrated major, has seen fit to expand up here. We think that creates a huge opportunity because other plants that are looking around the world can realize that when a company like Shell commits to the area, they need to be looking here, too.”

Shale Crescent plans to target the petrochemical industry, large industrial manufacturers and other leading energy-consuming businesses. Member Mark Schwendeman, who serves as president of the Schwendeman Agency, an Ohio-based insurance and financial services company, said the group plans to contact and market to the world’s top-200 energy users. The group partnered with Marietta College in Washington County to identify those companies and also plans to work with other private and public economic development organizations in the region to advance its agenda.

Shale Crescent joins a growing list of private and public groups that have formed across Ohio, Pennsylvania and West Virginia to spark more economic opportunities that could be created by the increase in shale gas production. Last October, leaders from all three states signed a three-year cooperative agreement aimed at creating policies that would promote the region’s prolific shale plays and continue revitalizing the region’s once-depressed industrial manufacturing base (see Shale Daily, Oct. 14, 2015).