Physical natural gas and futures both staged hefty advances Thursday. Outside of a few points in the Rockies, nearly all market locations gained by a few pennies to a nickel or more. 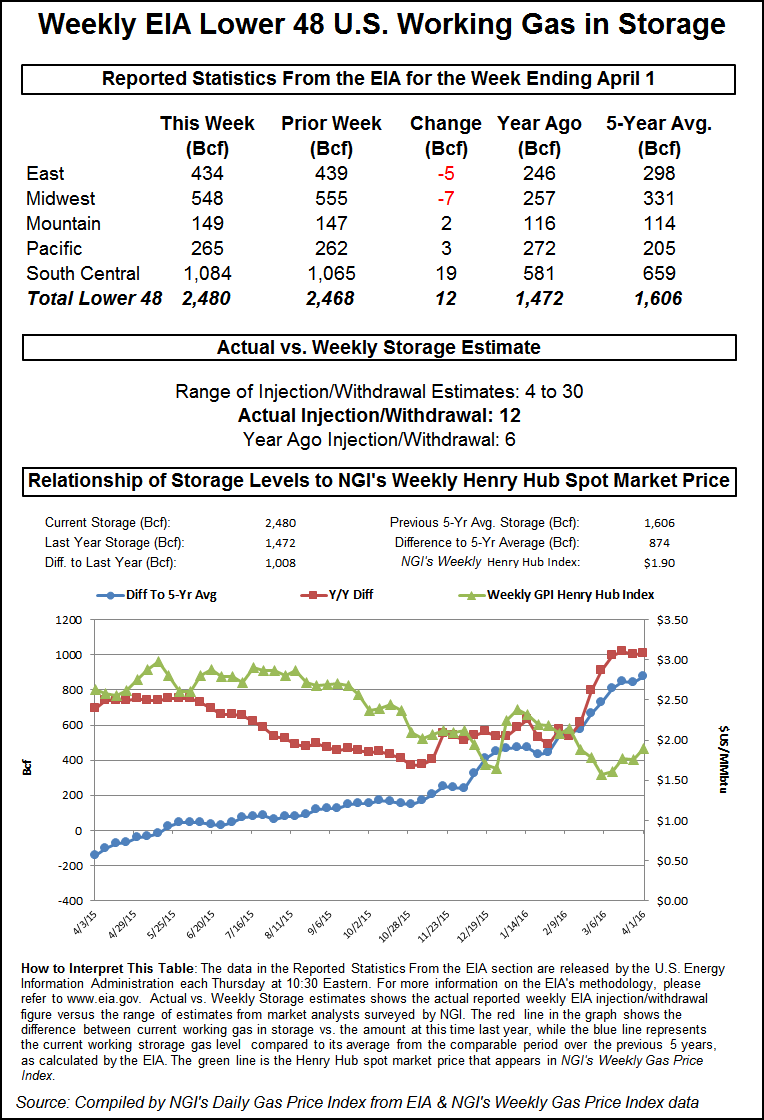 The NGI National Spot Gas Average was up 6 cents to $1.86, and eastern points averaged gains of more than 20 cents. The Energy Information Administration (EIA) reported a storage increase of 12 Bcf for the week ending April 1, which was more than what traders were expecting, but natural gas futures moved higher on the day, thanks to colder-than-normal temperatures.

“We were looking for a +6 to +8 build, but the market rallied. Why? I can’t tell you,” a New York floor trader said. “I’m looking at the market and I see +12 Bcf so maybe we should come off a little bit, but maybe not make new lows. I’m seeing this thing climb higher, and I’m saying to myself ‘What am I missing here?'”

Analysts seem to think the market is more focused on eastern and Midwest weather than storage data. “The 12 Bcf net injection was more than the consensus for a smaller 8 Bcf gain, although still within the range of forecasts,” said Tim Evans of Citi Futures Perspective. “The report was also bearish relative to the 19 Bcf five-year average net withdrawal. However, this may not be enough of a shock to offset the late-season heating demand due to the current forecast for colder than normal temperatures. Prices may be able to absorb the bearish storage surprises and still test higher.”

Inventories now stand at 2,480 Bcf and are a stout 1,008 Bcf greater than last year and 874 Bcf more than the five-year average. In the East Region 5 Bcf was withdrawn and the Midwest Region saw inventories fall by 7 Bcf. Stocks in the Mountain Region rose 2 Bcf, and the Pacific Region was higher by 3 Bcf. The South Central Region added 19 Bcf.

“This goes back to the 11% bulls [see Daily GPI, March 21]. You have a market supersaturated with speculative shorts, and when the market is at such a bearish extreme anything less than a complete disaster outcome will disappoint the bears. I can’t emphasize enough what an astounding achievement it is to have only 11% bulls, so I see what is happening here as this is what happens when everybody gets all in on the short side and the ensuing news is not all bad.

“Trading this market without your finger on the pulse of sentiment is kind of like flying blind. Then things like today happen. There is bearish news and the market rallies. What does that tell you? That says the bearish news has already been discounted, and even more bearish outcomes are already built in.

“If you are unaware of the sentiment, then today’s inventory report will be a complete mystery. In general, when the market can’t react to bearish news, that’s one of the signs it has bottomed. From my perspective, it’s a really nice outcome,” Zimmermann said.

Going into Thursday’s report, traders were thinking that in all likelihood the build would put storage at the highest point ever for this time of year. Inventories stood at 2,468 Bcf, and last year 6 Bcf was injected, yet the five-year average is for a 19 Bcf pull. Ritterbusch and Associates calculated a 4 Bcf increase, and industry consultant Bentek Energy was looking for a 12 Bcf build. A Reuters survey of 20 traders and analysts revealed an average 8 Bcf with a range of +4 to +30 Bcf.

Tim Evans of Citi Futures Perspective forecasted a build of 13 Bcf, which would make for a current year-on-five-year surplus of 843 Bcf would fall to 799 Bcf by April 15. “With the surplus ending the forecast period at a lower level than it started, we see this as confirming the market will become at least somewhat tighter on a seasonally adjusted basis than it has been. This gives the market at least a chance to move higher, although it may not be enough to wedge the price above $2.00.”

One school of thought had traders focused more on near-term weather than storage market dynamics. Forecasters are calling for another round of cold and snow to invade eastern and Midwest population centers. According to AccuWeather.com meteorologists, “A new plunge of cold air will produce snow showers in some parts of the Midwestern and Northeastern states and accumulating snow in others this week and into the weekend. In come cases the cold air will rival that of nights early in the week, including parts of the interior South.

“The air will be cold enough to allow showers to fall as a mix of rain, ice and snow in some areas and mostly snow in others. Intertwined with the wintry showers of varying intensity will be a storm system that arrives on the scene after the showery pattern has commenced. The storm rotating through the cold air invasion could bring a period of steady snow to parts of the Midwest and Northeast,” said AccuWeather.com meteorologist Elliot Abrams.

At least one consulting firm is looking for a second half recovery. PIRA Energy said its “bullish price outlook has been tempered by the collapse of gas-weighted heating degree days and the related inflation of end-March storage. During 2Q, the approximately 1 Tcf year-on-year storage surplus should ultimately limit [price] recovery. An end-March exit of approximately 2.5 Tcf will mandate approximately 40% less year-on-year net injections.