The global crude oil market could be headed for an “unprecedented” undersupply condition by 2020, suggesting further upside for West Texas Intermediate (WTI) and Brent even after prices rallied off the lows from late last year, according to analysts. 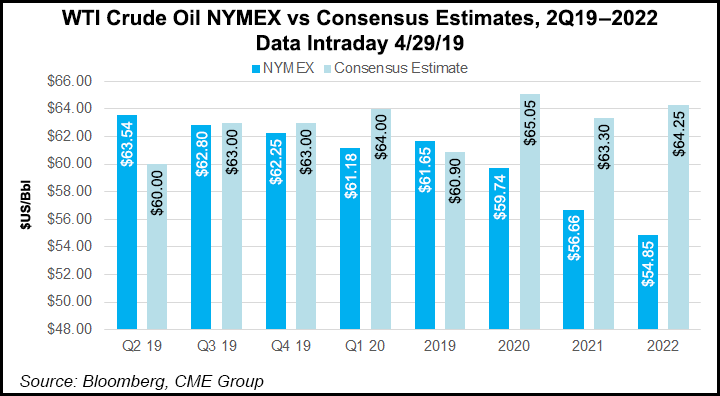 Meanwhile, with associated gas growth helping to put the squeeze on prices, gas-focused producers may need to cut back to address what’s shaping up to be a fundamental oversupply in the market after the current wave of liquefied natural gas (LNG) export start-ups, they said.

The oil market has awoken in early 2019, but the best could be yet to come for crude prices, a team of Raymond James & Associates Inc. analysts led by J. Marshall Adkins and Pavel Molchanov wrote in a note to clients Monday.

“With recent events, we now expect global petroleum inventories to draw by an average of one million b/d over the next two years, with global inventories (on a days-of-consumption basis) set to fall to unprecedented extremely low levels in 2020,” the Raymond James analysts said.

“…Even though our oil price forecast has been well above consensus, better-than-expected performance of oil prices year-to-date is leading us to raise our 2019 WTI forecast from $62/bbl to $66 and Brent from $72 to $74.50.”

The analysts said they anticipate 2020 becoming a “cyclical peak year” and are forecasting WTI prices of $92.50 and Brent at $100.

The Raymond James team noted that their forecast remains bullish to current market expectations, at 50% above the futures strip as of early Monday.

“The bottom line remains the same: oil prices must increase to high enough levels in order to meaningfully slow down 2020 global demand growth — and we think that means Brent oil prices back in the triple digits for the first time since 2014.”

Representing a steady recovery from the oil market’s December swoon, June WTI New York Mercantile Exchange (Nymex) futures climbed above $66/bbl early last week before pulling back over the next few sessions. As of Tuesday, June WTI Nymex futures were trading around $63-65.

The recent selling came as news reports circulated statements from President Trump that he wants to lower oil prices by seeking more production from OPEC (aka, the Organization of the Petroleum Exporting Countries), which would help make up for reduced Iranian output resulting from U.S. sanctions.

“Did OPEC get a call from the President of the United States? It doesn’t matter, because when President Trump talks, oil traders listen,” Price Futures Group analyst Phil Flynn wrote in a note to clients Monday. “OK, maybe they did not listen in the past, but after the president engineered a massive oil price crash last year they now must. The real question is whether OPEC will listen.”

Flynn said the underlying fundamentals could serve to dampen the impact of Trump’s recent comments. OPEC leaders have indicated that “before they raise output, they want to see a shortage of oil, increased demand or signs that Iranian barrels are coming off,” he said. “I don’t think the phantom OPEC phone call, or a tweet is going to change that. You also have the fact that the waivers to buyers of Iranian oil are set to end May 5. OPEC can’t trust that the president won’t grant new waivers at the last minute.”

The Raymond James analysts pointed to faster-than-expected OPEC cuts as a key driver behind their bullish oil price outlook. Since late 2018, Saudi Arabia and the United Arab Emirates (UAE) have cut supplies much more than expected, an effort to “correct oil pricing damage created when the Trump administration” issued waivers to certain Iranian crude importers this past November.

Also at play are steeper-than-expected production declines in Venezuela, and further reductions in Iranian exports expected with the Trump administration’s decision to remove the Iran sanctions waivers it previously issued, the analysts said.

Saudi Arabia alone is behind 1 million b/d of output cuts from peak to trough over the past six months, according to Raymond James.

“Regardless of the reasons, it is clear that Saudi (and the UAE) were very unhappy with the 4Q2018 oil price collapse, so they have cut supplies much more than their stated pledges,” the firm said. “Going forward, we expect that Saudi will be very cautious about increasing supplies at least until either $80-plus Brent pricing or clear evidence that Iranian exports are falling with the removal of waivers.”

To look at historical trends in global crude inventories, the analysts normalized days of consumption for OECD (aka, the Organization for Economic Cooperation and Development) countries and calculated a long-term inventory average of 30 days. They found a long-term inverse correlation between oil prices and stockpiles measured in terms of days of consumption for OECD countries.

“The previous low in days of consumption was around 27.5 days (or around 8% below normal) in late 2013 and coincided with $100-plus oil prices,” the Raymond James analysts said. “More importantly, our latest global oil model suggests global inventories will fall to much more bullish levels than the lows seen in 2013.

“In fact, our math suggests a desperately short crude inventory situation brewing, with 2020 global inventories falling to an unprecedented 24.5 days of consumption by the end of 2020 — down from a bit over 28 days as of 1Q2019.”

A bullish price environment for crude oil could mean more bearish headwinds for a natural gas market already weighed down by what analysts have characterized as a significant oversupply even after accounting for further demand growth from LNG exports.

The surge in Lower 48 production growth has been driven in no small part by associated gas from liquids-focused plays in the U.S. onshore, a trend that has analysts at Genscape Inc. increasingly factoring in liquids pricing when modeling their supply forecast.

Plays driven or heavily influenced by liquids pricing are making up a larger share of U.S. production, according to Genscape, which projected a 6.8 Bcf/d year/year increase in Lower 48 dry gas output for the 2019 injection season. That’s a slower growth rate compared with last summer, which saw 9.6 Bcf/d of growth year/year. But that’s “still the second largest growth rate we’ve seen from a summer-on-summer, or year-on-year perspective, ever,” Genscape analyst Eric Fell said during a webinar in early April.

“Oil prices are having a massive impact on our forward gas balances, bigger than we’ve ever seen before as the amount of production in the mix that is driven either mostly by oil or at least heavily impacted by liquids prices is bigger than ever,” Fell said.

In recent weeks, the natural gas market has been “struggling to pare oversupply,” according to analysts with Tudor, Pickering, Holt & Co. (TPH). By the TPH team’s count, four straight weeks of larger-than-normal builds have seen U.S. gas stockpiles grow by a “remarkable” 223 Bcf compared to a five-year average of 37 Bcf for the same period.

“We expect these outsized builds to continue through June, sufficient to erase the current 21% deficit versus the five-year average,” TPH said.

Demand growth from LNG exports and exports to Mexico could help “firm up the market” this summer, “temporarily removing the oversupply and resulting in storage levels tracing the five-year average from July through October.”

This balance figures to be “short-lived,” with the anticipated start-up of the Gulf Coast Express pipeline uncorking 2 Bcf/d of Permian Basin production starting in October.

“Assuming normal weather, we see inventories beginning to track above the five-year average as we move through withdrawal season,” the TPH analysts said. “While we see a near-term price floor and potential upside through summer, we ultimately don’t see sufficient demand emerging to soak up associated-driven supply growth, particularly in the 2021-2022 time period where minimal LNG growth is expected.”

This “associated-driven” supply growth is a big reason why analysts have identified an inverse relationship between crude and natural gas prices moving forward. But near-term shifts in commodity prices won’t have an immediate impact on production.

“Price impacts production with a lag,” Genscape’s Fell said. “It takes time for people to recognize the change in prices, to go to their board and say, ”Hey, we want to add three rigs in the Haynesville.’ They then have to go to a rig contractor, add rigs, contract for some completion crews. You’ve got to go drill a pad of wells, complete it. That all can take six months or more to do.

“So you have a minimum six to nine month time frame from when a price change occurs and when it starts to change production,” he said. “Then those changes can accumulate over time as well. That impact of those added rigs, if they’re kept running, it brings pads online over time. So you have a bigger impact 12 months out than six months out.”

U.S. drilling activity has stagnated since last year, with recent reports from Baker Hughes, a GE Company (BHGE) showing the total domestic rig count falling behind year-ago levels, driven by a pullback in oil-directed drilling. Citing the recent BHGE data, Flynn said the U.S. oilpatch is “still in cut-back mode,” raising doubts about the potential for domestic producers to make up for global supply cuts.

“The reality is that many shale fields are still bleeding cash,” Flynn said. “That’s why Big Oil needs to step in. But that may not be easy.”

Meanwhile, gas-focused producers may need to further tighten their belts given the long-term bearish pressure on natural gas prices, the TPH analysts said.

“We believe oil companies have garnered the majority of headlines when it comes to overhead given higher level of investor focus and interest in this portion of the space,” according to TPH. “That said, gas names may warrant as much (if not greater) attention given deteriorating fundamentals, which we believe may necessitate capital cuts toward or below maintenance levels in order to help stabilize supply-demand dynamics through 2023.

“…Ultimately, we wish the industry wouldn’t be facing these continual headwinds, but gas companies may need to start addressing controllable costs in order to remain viable investments if prices continue to fall and growth must be stripped out of the supply stack.”