Brazos Midstream has executed gathering and processing agreements with Shell Exploration & Production to construct a natural gas gathering system in the core of the Permian Basin’s Delaware formation in West Texas. 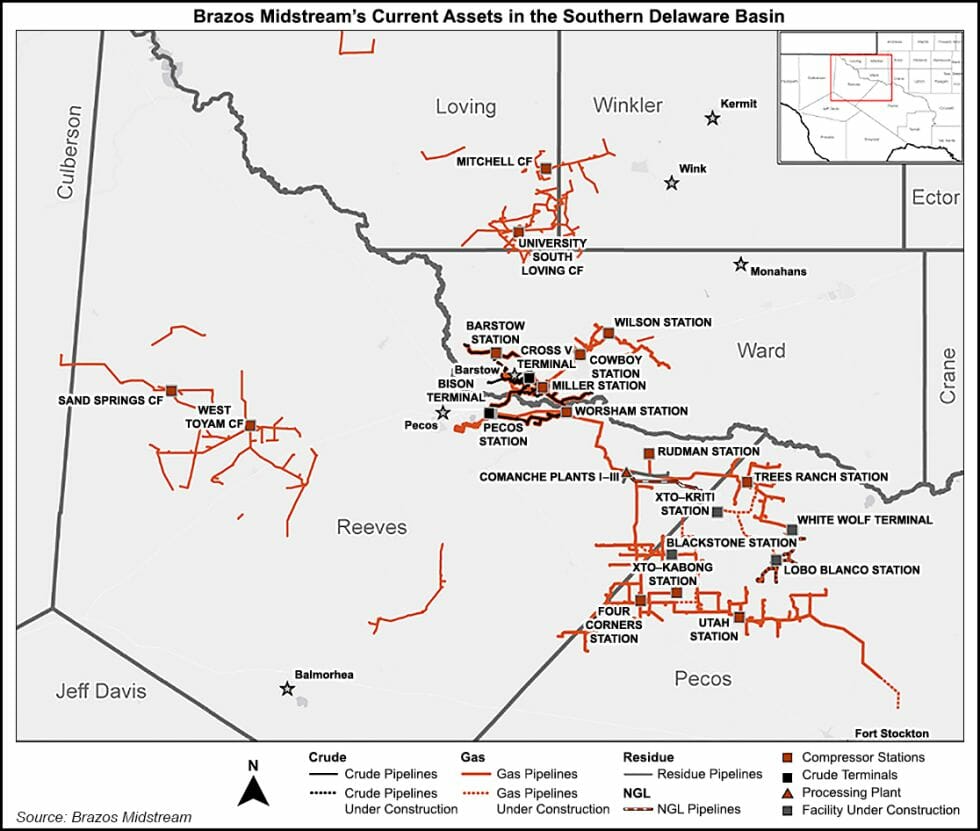 The infrastructure would be anchored by 15-year, fee-based acreage dedications totaling 55,000 acres in Loving, Ward, and Winkler counties. The Fort Worth, TX-based operator plans to construct 16 miles of high-pressure pipeline extending from its existing gathering and processing systems, which then could be expanded to support multi-well pad development by producer customers and other operators in the area. No financial details were disclosed.

“These projects are a testament to the strength of our operating team and demonstrate our commitment to aggressively expand our asset base in support of our upstream customers,” he said. “We remain committed to offering comprehensive, best-in-class midstream services and will continue to leverage our extensive experience in the region and our strong customer relationships as we grow in one of the most economic oil and gas producing regions in the country.”

Included in the Brazos growth pipeline is the recently commissioned Comanche III plant, a 200 MMcf/d cryogenic gas processor, which started up in 1Q2019. Comanche III is the third at the Reeves County complex, bringing total operated processing capacity in the region to 460 MMcf/d.

On deck is the proposed 200 MMcf/d Comanche IV gas processor, which could begin construction as early as 2020.

Brazos is considered one of the largest privately owned midstream operators in the Delaware. Assets include 800 miles of intrastate gas and crude gathering pipelines, the gas processing complex and about 75,000 bbl of crude storage. Last year it gained Morgan Stanley Infrastructure Partners as a sponsor to help with expansion plans.

Brazos joined Tulsa-based pipeline giant Williams last November to expand their natural gas and crude oil footprint in West Texas. Under terms of the joint venture (JV), Williams is contributing the muscle, including its existing Delaware assets, in exchange for a 15% minority position in the Brazos system. Brazos, which is providing most of the assets, would own an 85% stake in the JV and operate the system.

Shell earlier this year was producing about 145,000 boe/d from the Permian, a 200% increase from January 2017. “We’ve also matured the inventory of resources in excess of a 1 billion boe in the Permian in forward-looking breakeven prices of less than $40/bbl,” CEO Ben van Beurden told analysts in January. “So we expect to deliver continued growth through 2020.”