The “pressing need” to reduce carbon emissions will require dramatic changes for society and the oil and gas industry but it can’t be done overnight or even in a few years, BP plc Group CEO Bob Dudley said Wednesday. 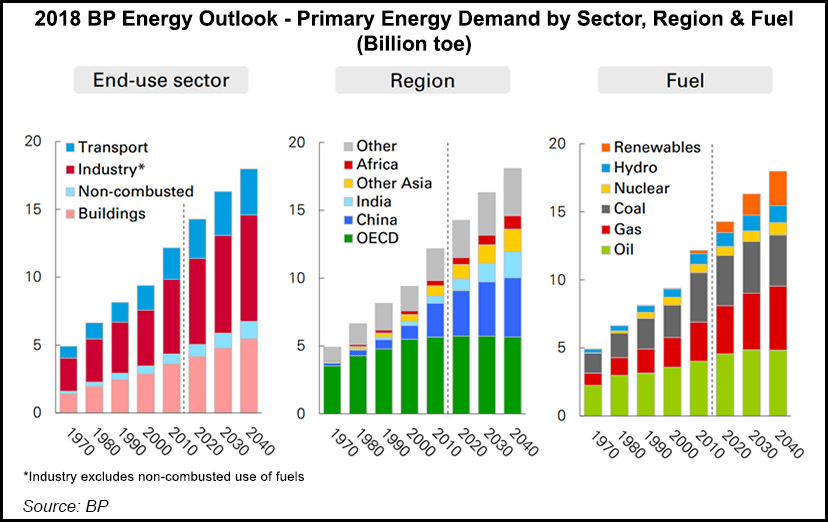 Dudley, a keynote speaker at the Oil and Gas Conference in London, pointed to the recent report by the United Nations (UN) Intergovernmental Panel on Climate Change, which made clear that emissions need to be nearly cut in half by 2020, almost 10 years earlier than a sustainable development scenario by the International Energy Agency (IEA).

“By whatever timeline, we recognize the need for urgency on emissions,” Dudley told the audience. “At the same time we also recognize global energy demand could rise by a third. That’s the dual challenge: providing much more energy, while dramatically reducing emissions.”

Some of Dudley’s comments mirrored those made at the conference on Tuesday by Royal Dutch Shell plc CEO Ben van Beurden.

“I think we are standing at a fork in the road, and we need to decide which way to go,” Dudley said. “We could go the way of people who want to drive a wedge between the energy industry and investors — between oil and money, if you like. They push for potentially confusing disclosures, raise the specter of a systemic risk to the financial system from stranded assets and campaign for divestment, all in an effort to squeeze oil and gas out of the fuel mix.”

The people pushing for change “are driven by good intentions, but my concern is that their suggested recommendations could lead to bad outcomes, particularly for some of the most vulnerable people in the world.”

A more “innovative and collaborative path” could provide better solutions, recognizing the role fossil fuels can play in meeting the challenges facing the planet.

“A race to renewables” isn’t enough to meet the UN goals established in late 2015, aka the Paris agreement, which laid the foundation for keeping a global temperature rise below 2 degrees C above pre-industrial levels. “Instead we must be in a race to lower emissions by all means possible.”

However, oil and gas companies cannot simply divest their fossil fuels and replace them with renewables. For example, while renewables may be pushing coal out of the power sector, natural gas remains “the perfect partner for intermittent renewables.”

To that end, BP in July paid $10.5 billion to acquire nearly all of BHP’s massive U.S. onshore portfolio, giving it an estimated 470,000 net acres in the Permian Basin in West Texas and substantial acreage in the Eagle Ford and Haynesville shales.

While alternative energies are growing rapidly, they may supply only about one-third of the energy mix in 2040. That means oil and gas will have to make up two-thirds of global energy demand.

BP’s 2018 Energy Outlook projected oil and gas would account for 40% of energy demand in 2040. A similar forecast by the International Energy Agency puts the figure at nearly 50% by then.

BP economists estimate that trillions in investment still are needed by the industry to counter decline rates in existing fields and make up the shortfall.

Some critics have speculated that if the energy transition were to happen more quickly than anticipated, the assets of international oil companies would have to be written off at scale.

Those concerns are overstated, according to Dudley, who pointed to the oil price collapse in the last half of 2014. In the first six months after the collapse, around $2 trillion of value was wiped off the oil and gas industry’s books.

However, in terms of the global economy and financial stability, the oil price collapse had a limited impact, he said. Some individual companies may have taken sharp hits, but the broader industry emerged leaner and more disciplined, he noted.

The “more serious systemic risk” more likely would follow underinvesting in exploration and production. Plenty of global reserves should remain untouched, though, with only the most economic, least risky and “cleanest from an emissions standpoint” developed.

“We need to continue investing, not to find and produce as much as we can, but to access the most advantaged new barrels that will be needed to make up for declines,” Dudley said.

The supermajors’ balance sheets together have around $1 trillion of capital employed today. In any one year they invest about 10% of their capital, or around $100 billion. Roughly speaking, that means businesses and balance sheets could be reshaped in about 10 years, “providing flexibility and resilience for the future.”

However, while hopes are high that the pace of the transition to renewables is going to accelerate, it’s more likely to take decades rather than years, Dudley said.

“That leaves time for us to anticipate changing trends and adjust our portfolios accordingly, including with many new forms of energy, just as we are doing right now.”