The shale revolution is stimulating a large-scale infrastructure buildout and record levels of capital spending — in the railroad industry. 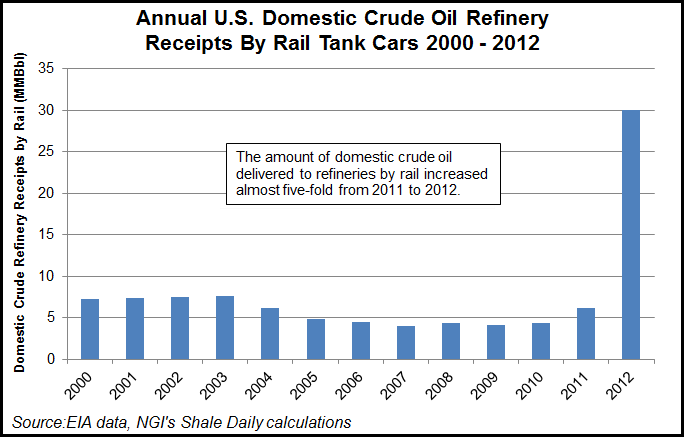 Proppant and other product needed to produce oil and gas from shale plays travel to the energy patch by rail; each horizontal drilling rig requires about 40 inbound rail carloads of product. But more significant is the amount of rail traffic taking crude to refineries and refined products to market. In 2012, U.S. Class I railroads originated 256% more carloads of crude oil than the previous year, BNSF Railway Co. CEO Matthew Rose said in Houston Wednesday.

“We’re filling the gap, if you will. Other forms of transport don’t have the network in place to move the crude where it needs to go…Our networks are already in place, and they stretch across the entire country,” Rose said at the Summer North American Prospect Expo business conference.

BNSF now serves all of the country’s western shale plays and has 24 crude oil destinations with another 30 planned. The railroad intends to have 50 destinations by the end of 2014, Rose said. BNSF is investing $4.3 billion this year, which is the largest capital program ever announced by a railroad, Rose said. BNSF isn’t the only one. This year, Class I railroads are expected to invest about $13 billion in capital projects, he said.

By comparison, major midstream player Kinder Morgan Inc. has identified about $14 billion worth of organic growth projects over the next five years, which does not count billions more on the drawing board, Kinder’s Ron McClain, president of the products and pipelines business, said at the conference.

BNSF expects to be handling 11 trains loaded with crude per day in the months ahead, Rose said. By the end of this year, BNSF expects to have rolled 500,000 tank cars of crude oil since shipments took off from the Bakken in 2008.

With fuel accounting for about 30% of the railroad’s overall costs, BNSF has begun to look at powering locomotives with lower-priced liquefied natural gas (see Shale Daily,March 8). A pilot program is to begin this fall in Lincoln, NE, Rose said.