Blue Racer Midstream LLC, a joint venture of Caiman Energy II LLC and Dominion Resources Inc., has been forced to curb spending and restrain its rapid growth with the downturn in oil and natural gas prices, CEO Stephen Arata said this week at an industry conference in Pittsburgh. 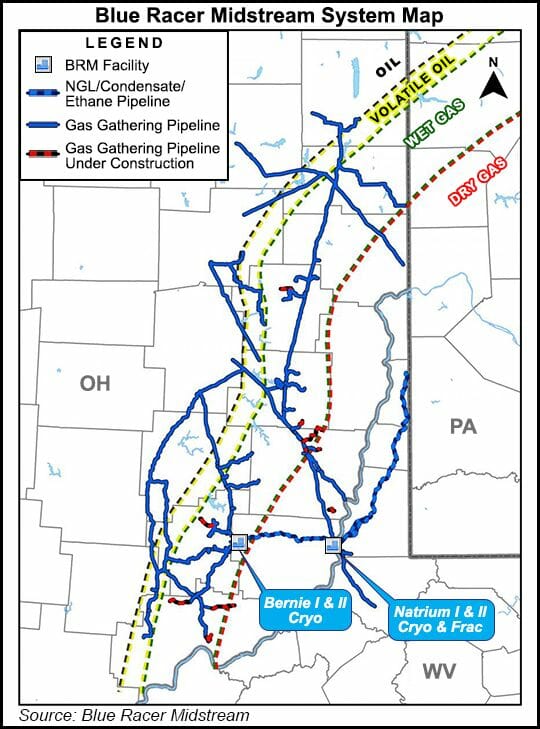 Formed in 2012, the company’s system of gathering pipelines, processing plants and fractionators has significantly expanded over the last three years, transforming Blue Racer into a niche processor of super-rich Marcellus and Utica shale gas in Southeast Ohio and Northern West Virginia. Arata was named CEO in May 2015, replacing Jack Lafield, who formed Caiman II’s predecessor company and later sold it for $2.5 billion. While Blue Racer is backed by one of the nation’s largest producers and transporters of energy in Dominion, it remains a private company and seldom offers operational updates.

But Arata told an audience in Pittsburgh this week that while the company’s growth has been curtailed by the commodities downturn, it’s still preparing for a rebound by continuing to expand its facilities, which are primarily located in Southeast Ohio.

“As everyone in this room knows, at the beginning of last year, most producers across the country and in this basin hit the brakes pretty hard and drilling slowed down significantly,” he said Thursday at Hart Energy’s Marcellus-Utica Midstream conference. “We obviously have a backlog of wells in our area, but our contract structure with our drillers allows us to stop building when they stop drilling.”

Blue Racer opened its Berne cryogenic processing facility in Monroe County, OH, in 2014 (see Shale Daily, Nov. 4, 2014). It also expanded its Natrium processing and fractionation facility last year. The company has 800 MMcf/d of processing capacity currently online at those facilities, but despite the downturn, Arata said more is on the way.

The company continues to expand Natrium, which is also located in Monroe County. A 200 MMcf/d processing train is currently under construction that would increase the facility’s capacity to 600 MMcf/d if completed. Arata added, however, that completion of the plant would depend on capacity commitments from producers. Until Blue Racer has the business, he said, it will not put the new plant in service, but rather get it to the point where it can be turned online quickly should demand for more processing warrant it.

“I would call it partially constructed now,” Arata said. “We own the plant; we’ve done all the civil work; the foundations are ready; we have the air permit, and we’ve done all the engineering. But we’re really, at this point, waiting on our customers to give us the go-ahead to say they actually need that capacity.”

Arata said it would be about six months from the time producers request the capacity until the plant is operational. The company is also expanding the facility with a barge loading complex. Arata said Blue Racer remains optimistic that the processing plant will come online in the near term, saying there are about 90 wells within the company’s gathering footprint that are being drilled or completed.

“We don’t expect all of those to come on this year; we expect some of them to be delayed until next year, but we do feel really good about volumes maintaining in our part of the play through the end of the year and into next year.”

Blue Racer currently operates 650 miles of natural gas gathering pipelines spanning 13 Ohio counties, most of which it purchased when the company was formed, but it has constructed about a quarter of the system since then. It owns another 155 miles of natural gas liquids and condensate gathering lines. Its fractionation capacity, which Arata said is particularly important in the company’s liquids-rich footprint, has expanded from 36,000 b/d to 123,000 b/d since the JV was formed.

Some of the company’s growth plans, though, have been put on hold. During a six-week period last year, Arata said Blue Racer identified about 50% of its planned capital spending to eliminate from the 2015 budget. He said the company continues “to maintain very tight control” of capital. Currently, Blue Racer has $150 million drawn on its credit facility and $850 million in liquidity.

“We have no need at all to go to either the debt or equity markets for the next several years if we choose not to,” he said.

“It’s not public yet, in terms of the specific numbers, but our capacity numbers have continued to grow in the fourth quarter and into the first quarter [of this year] as our producers continue to bring on new well pads in our system,” he said.

At the 400 MMcf/d Berne complex, which is about 30 miles from Natrium, Arata said the company has room for a third processing train. He said that would get built when the time is right.