Everyone, it seems, is giving a piece of their minds to the federal Bureau of Land Management (BLM) on its proposed comprehensive national plans for the greater sage grouse. 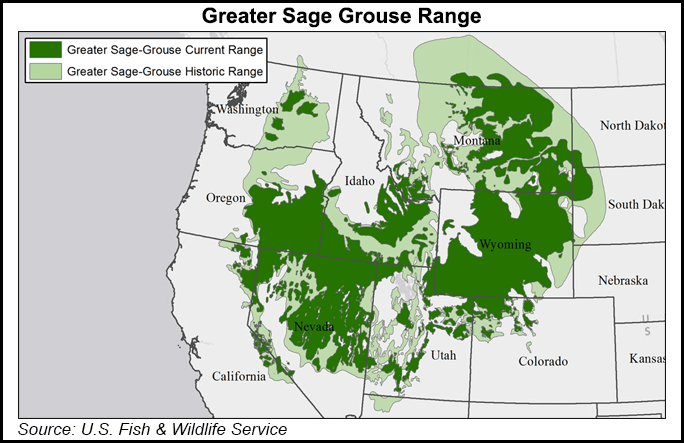 When the 30-day comment period on the proposal ended Monday, BLM had received 40 protests, a Washington, DC-based spokesperson in the Department of Interior (DOI) told NGI‘s Shale Daily. “Anyone who contributed in a substantial way to the creation of an environmental impact statement [EIS], such as serving as a cooperating agency or formally commenting on the draft EIS, may file a protest,” she said.

Protests have been loud and varied, but some BLM officials were telling news media that they expect the bulk of the comments to continue to come in through Wednesday (July 1).

Defenders of Wildlife concluded that the different plans are inconsistent and would not accomplish the federal agencies’ stated goal of “incorporating consistent objectives and conservation measures.”

According to BLM officials, the protests themselves vary widely, with some arguing the proposed plans are too restrictive and others contending that they don’t go far enough. BLM officials said the agency will prepare “a detailed analysis” of valid issues raised by the protesting parties and include them in a “Protest Resolutions Report” from the BLM director, which will be made public.

Among the 10 states making up the greater sage grouse range, many have developed their own plans for handling the habitat of the ground-dwelling birds, and have joined federal agencies in an effort to avoid an Endangered Species Act listing. Such a listing would harm oil/gas, mining, agriculture and livestock development, according to critics.

However, at least one of the states, Utah, has filed a protest alleging that some facts cited relied on outdated information, and Idaho has indicated that it may protest the plans because they threaten to unravel past collaborative work of its officials and federal agencies.

States for a long time have told Congress and federal agencies that they are in a better position to protect the greater sage grouse (see Shale Daily, May 19).