A conservation group has filed a lawsuit over the Trump administration’s plans to offer oil and gas leases near three national monuments in the southeast part of Utah. 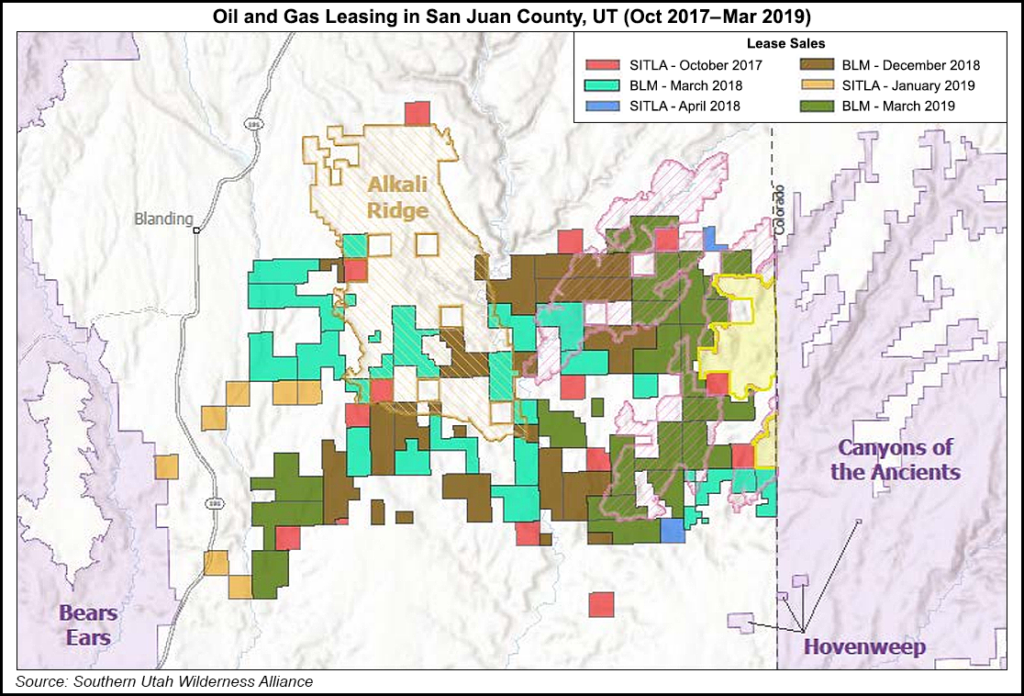 The Southern Utah Wilderness Alliance (SUWA) alleges in U.S. District Court for the District of Utah that the Interior Department’s Bureau of Land Management (BLM) violated federal law in 2018 when it offered 35 leases covering about 54,508 acres at two lease sales in The Southern Utah Wilderness Alliance v. David Bernhardt et al, No. 2:19-cv-266.

Specifically, SUWA claims BLM ran afoul of the National Environmental Policy Act, the Federal Land Policy and Management Act and the Administrative Procedures Act. All of the leases are in San Juan County, near the Bears Ears, Canyons of the Ancients and Hovenweep national monuments. The area has seen mostly conventional but also some unconventional oil and gas drilling. San Juan County overlays the Paradox Basin, which includes the Cane Creek and Hovenweep shales.

At issue are 20 leases covering 28,805 acres of public land that BLM offered at a sale in March 2018, followed by 15 leases for 25,698 acres offered in December. BLM denied SUWA’s protests of the sales last May and again in February, according to the complaint.

“The BLM has placed the final pieces, completing its puzzle of oil and gas leases located at the doorstep of Bears Ears, Hovenweep and Canyons of the Ancients National Monuments,” said SUWA staff attorney Landon Newell. “And the BLM has done so without considering the ‘big picture’ impacts to national monuments and climate change and the surrounding landscapes, including impacts to dark night skies and the region’s rich cultural heritage.”

Trump signed proclamations in December 2017 to reduce the size of Bears Ears by 83% to 228,784 acres from 1.35 million, and for trimming the Grand Staircase-Escalante National Monument by 46% to about one million acres. Environmental and tribal groups have filed lawsuits in U.S. District Court for the District of Columbia to challenge the reductions.