The U.S. Bureau of Land Management is considering leasing 31,900 acres of the Wayne National Forest in Southern Ohio, some of it for horizontal hydraulic fracturing, after oil and gas companies recently filed expressions of interest for the land with the agency. 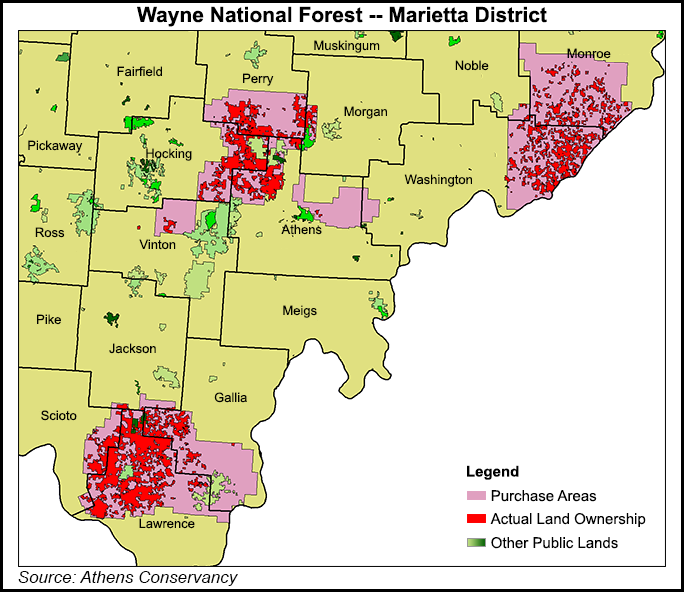 The decision comes more than three years after the BLM signed a supplemental information report (SIR) that said an in-depth study it conducted proved that there was no need to amend the forest’s 2006 land and resource management plan or supplement its environmental impact statement (EIS) to address possible surface impacts from unconventional drilling (see Shale Daily, Aug. 28, 2012). The SIR cleared the way for the agency to hold an oil and gas lease auction even after strong opposition from environmental groups and concerned citizens (see Shale Daily, Nov. 21, 2011).

The BLM said earlier this month that it would begin environmental assessments (EA) to consider whether to lease more parcels in the forest. Following the completion of each EA, BLM said a decision would be made to either approve leasing, not to approve leasing or to complete an EIS to address the process. Public meetings are set to begin on Tuesday and last through the end of the week in impacted towns including Marietta, Athens and Ironton, OH. In all, the agency said it has about 68,281 acres that could potentially be leased for resource development.

A BLM representative said the gatherings would be similar to scoping meetings in which the agency would highlight the industry’s proposals and interest to notify the public. Since the forest started land purchases in 1935, 244,242 acres have been acquired. About 41% of the mineral rights across that acreage are owned by the federal government. According to the BLM, there were 1,275 active vertical wells in the forest as of June 2015, 493 of them located on federal land.

The agency said about 18,800 acres in Washington and Monroe counties, which are both prospective for the Utica Shale, have been identified by the industry as areas of interest. More than 13,000 acres of interest are located farther to the west and south in Athens and Gallia County, where conventional drilling has been more common.

Mostly private land under lease in Monroe County is under extensive Utica development. The state has issued more than 200 permits there, while a handful of other operators have been issued about 20 horizontal Utica permits in Washington County, where they’ve stepped out from the play’s core to the north in recent years.

The BLM said a team of its subject matter experts would conduct the EAs in coordination with specialists from the forest to “consider the benefits and impacts associated with energy development.” Last week, a group of six environmental advocacy groups, including the Sierra Club and the Buckeye Forest Council, challenged the agency’s proposal and called for a full-scale environmental report to be conducted and made public before any decision is made to take bids from oil and gas companies.

The groups said the BLM’s previous study was “poorly conceived” and “shallow,” adding that the SIR and the internal review that led to it violated federal environmental law because it “was written in secret” and excluded public participation.