The U.S. Bureau of Land Management (BLM) office in Utah opened the door to the possibility of substantially more oil and natural gas development in parts of the Uintah Basin, issuing on Friday a record of decision (ROD) for up to 5,800 infill wells on federal, state and private lands south of Myton, UT. 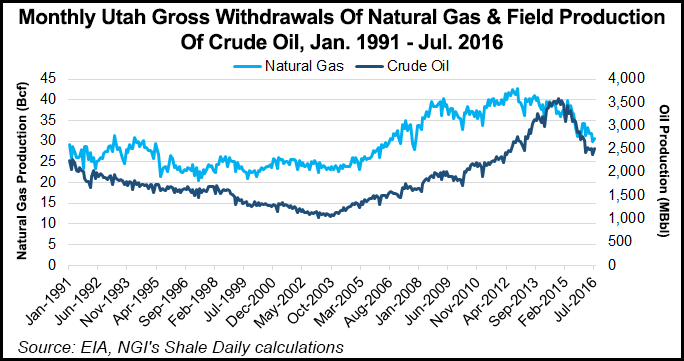 New wells, along with related new transportation and energy infrastructure, would be developed throughout the area during the next 20 years.

Estimates indicate the added development could produce 540-600 MMcf of natural gas and up to 335 million bbl of oil during the next 20 years, while adding up to 500 jobs in the start-up phase in two counties (Uintah and Duchesne) where added taxes totaling $73.6 million and $138 million could be paid to the two counties and state, respectively.

As part of the action, BLM approved the preferred alternative in the Monument Butte Project Area oil and gas FEIS, which was hammered out in close collaboration among BLM, Newfield Exploration, the U.S. Environmental Protection Agency, the state of Utah, and the U.S. Fish and Wildlife Service.

The Monument Butte plan deals with future energy development of Newfield’s valid existing oil/gas leases in an existing developed oilfield. Most of the area has been under lease for more than 40 years.

While acknowledging that air quality is a major concern in the area, BLM officials said the ROD is an example of “safeguarding natural resources, while allowing future energy development,” calling it a “top priority” for the agency. Operators will have to apply separately for the permits needed to develop the 119,743 acres included in the potential oil/gas producing area.

Threats to air quality, plants, fish, and wetlands were determined to be minimized as part of the Monument Butte FEIS.

There are currently more than 3,000 wells on federal, state and private lands in the area covered by the ROD. BLM’s decision will allow infill drilling to help in the secondary recovery of the oil/gas resources already in place, and the drilling of up to 5,750 new oil/gas wells, along with roads, pipelines and other infrastructure. The latter will all be subject to individual approvals and mitigation requirements in the ROD.

BLM used the collaboration with Newfield and others to develop a comprehensive air mitigation strategy, and as a result emissions would be minimized and/or offset, according to Jenna Whitlock, acting BLM Utah state director.

“The plan we developed results in a net-zero increase from stationary sources, such as tanks and compressor stations,” Whitlock said.

The scope of the potential build out that this ROD could unleash over the next 20 years includes: 5,750 new wells; 1,245 new drilling pads, limited to four large and 12 small/section; 226 miles of new roads and pipelines; 318 miles of new pipeline adjacent to existing roads; 21 new compressor stations; seven new water treatment and injection facilities; 12 gas and oil separation plants; six water pump stations; one new fresh water collector well, expanding six water treatment and injection facilities; three expanded compressor stations; and up to 10,122 acres of new surface disturbance during the life of the project with 4,978 acres reclaimed.

The eastern half of the project area is located within the Uintah and Ouray Native American reservation’s exterior boundaries of the restored boundaries of the reservation. Newfield’s proposed development plan, however, does not include development of land or minerals owned or administered by the Ute Native American tribe, Bureau of Indian Affairs or individuals with allotments.