Even though onshore production is rising, low crude oil and natural gas prices stung Rapid City, SD-based Black Hills Corp. during the second quarter, and it now plans to reduce capital expenditures (capex) in 2016 and 2017. 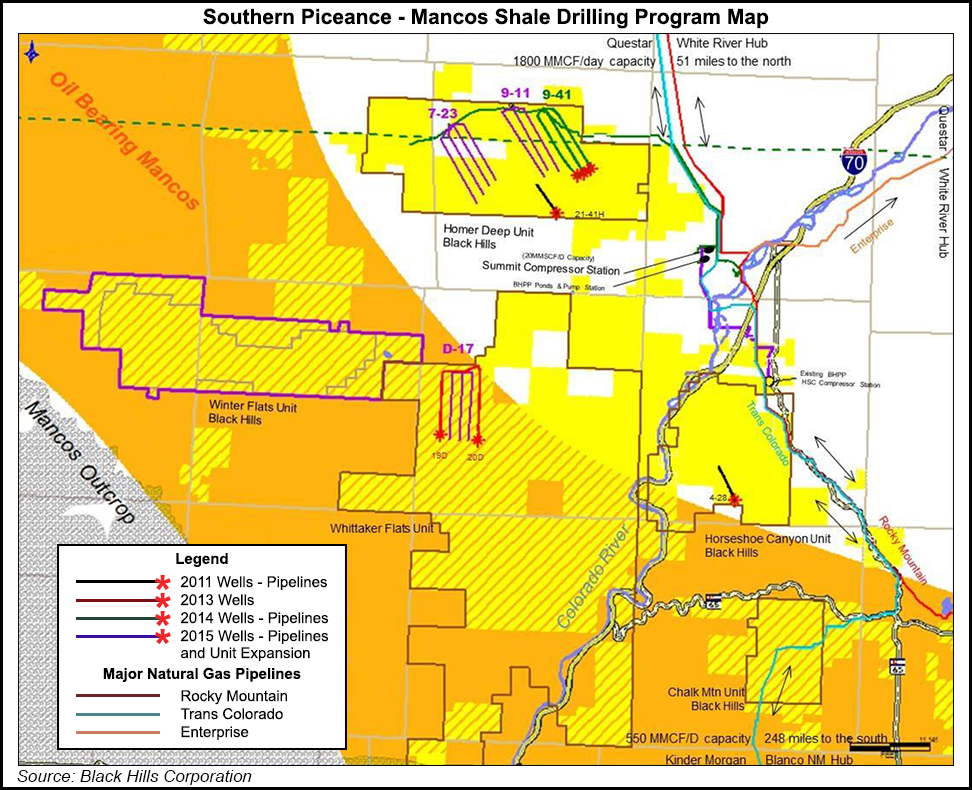 In the second quarter, net income was $25 million (56 cents/share), compared with $20 million (46 cents) for the same period last year. The company recorded a $66 million writedown on the value of its properties, as well as a $7.5 million loss for its oil/gas operations during 2Q2015.

“We continue to manage through a challenging commodity price environment for our oil/gas segment,” said CEO David Emery. He said the company plans to reduce capex by $215 million in 2016-2017 because of an expectation for continued low commodity prices over the next two years.

Black Hills plans to delay completing several wells in the Mancos Shale because of low prices and a lack of additional processing capacity in the area. For 2Q2015, production in the Mancos increased 47% and was up 20% sequentially.

On the positive side, Emery said that the low commodity price environment is good for the company’s proposed cost-of-service gas reserve program for its distribution utilities (see Daily GPI, Feb. 5). Black Hills has added an opportunity to expand its program of providing reserves for ratepayers from its exploration and production (E&P) segment through the addition of SourceGas Holding LLC’s utilities for $1.89 billion (see Daily GPI, July 13).

The agreement would add 425,000 natural gas utility customers in four states and a 512-mile intrastate gas transmission pipeline in Colorado.

While three more Mancos gas wells are expected to be put in production in September, Emery said the final decision has not been made to include them in the utility cost-of-service reserves program, but “that is certainly the goal we’re working toward.” If not the Mancos, he said Black Hills expects to acquire some small additional gas producing properties that could be included in the utility program instead.

“I think as we increasingly complete wells, we are getting more confident in the quality of the play, which so far has met or exceeded all of our expectations,” Emery said. The company’s utilities expect to file with state regulators for the gas reserves program this fall.

Without the long-term cost of service program, more capital spending on the Mancos in the current low-price environment would not pencil out. “Realistically we won’t shift capital back to normal E&P programs because current prices just don’t support the rates of return needed for adequate payouts on most of our plays,” Emery said.