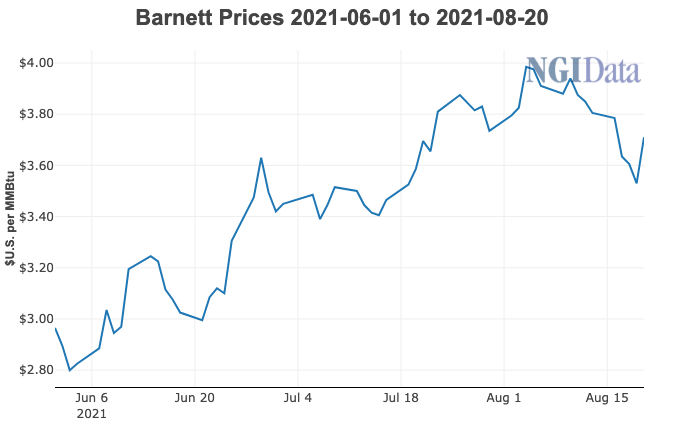 With independent E&Ps largely focused on the upstream, value chain integration has chiefly been the territory of majors and supermajors. But BKV CEO Chris Kalnin said the power plant deal represents the start of a new era for onshore E&P companies, one that will see them wade more and more into the value chain as they search for stability amid the ups and downs of the upstream cycle.

“I think this is the tip of the spear,” Kalnin told NGI. “I think you’re going to see, over the next 10 years, E&P companies that were traditionally onshore shale independents start to push into the value chain. It’s not just going to be the super majors that are doing this. And we think there are enough bespoke, smaller, niche-type opportunities that there’s a space for the guys that are below the majors to play in.”

Denver-based BKV, which has assets in the Barnett Shale of North Texas and the Marcellus Shale of Pennsylvania, is a subsidiary of Thai energy company Banpu PCL. It plans to acquire the 758 MW Temple 1 power plant from Temple Generation Intermediate Holdings II LLC in a deal set to close by the end of the year.

Kalnin said the plant will be fed by production from the company’s Barnett acreage, which it purchased from Devon Energy Corp. in 2020. The acreage produces about 500 MMcf/d, and Kalnin expects the new plant will use about 75-100 MMcf/d. The remaining production would be marketed to “various pools,” which is how BKV currently sells its gas, he said.

BKV is bullish on the Texas power market, which it expects to grow in the coming years as companies such as Tesla and HP relocate to the Lone Star State. Kalnin also sees the opportunity to generate significant savings by integrating production and end use.

“A lot of the synergy can come from just the way we set up contracts with the power plant,” he said.

The purchase would also allow BKV to capitalize on power markets by exposing it to a “stable” forward curve, he added.

“If you look at the forward curve for gas, it’s really high in the next two years, and then it drops off really quickly,” he said. “Power is more stable. And so the tail of the curve, if you go further out, it’s kind of more stable and higher than gas, and vice versa in the near-term. So we can actually structure our commodity buys to optimize between gas or electrons, depending on the forward curve shape, and really protect and capture more upside, or protect more downside depending on how you want to look at it.”

If all goes to plan, BKV is set to have a busy couple of years. Kalnin said the company is currently scouting additional upstream deals and expects to make an announcement in the next 12-24 months. BKV is also looking into other direct-to-end-use acquisitions like the Temple plant, Kalnin said.

The company is not immune to the environmental concerns of investors and other stakeholders, and BKV is aiming to go carbon neutral within the decade, Kalnin said.

He sees the potential for BKV to develop carbon capture, utilization and sequestration projects in the near future. The company has already started working with several partners to look into CCUS, and Kalnin said BKV believes it can inject as much as 50,000 tons/year of carbon dioxide into the reservoirs it manges.

The company is also exploring options to go public in the next 12-36 months, he added.

“We think it’s time for E&P companies to become darlings of Wall Street again,” he said. “And I think with a new story and a fresh angle, we think we’re priming the company to be that investable, 21st century full-cycle energy company that has a lot of growth and discipline.”

When asked if BKV would opt for a traditional initial public offering (IPO) or a reverse merger with a special-purpose acquisition company, Kalnin said his preference was for an IPO.

“That said, we’re always looking at opportunities,” he said.