A Michigan-based biogas producer with European ties thinks there is gold in the agricultural waste of Kansas, where it is proposing to build a $100 million production complex in the heart of the Heartland to produce renewable natural gas (RNG). 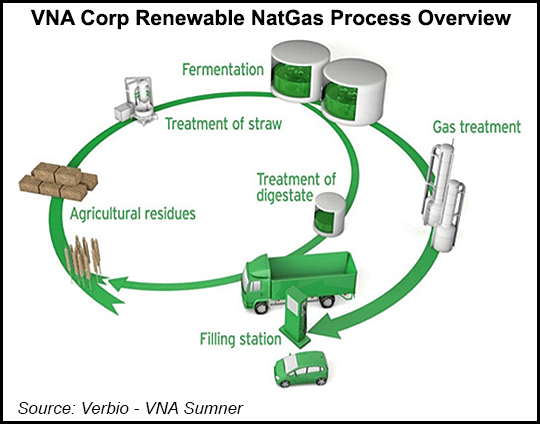 Planning commission officials in Sumner County, KS, about 40 miles south of Wichita, are reviewing the proposal from Grand Rapids, MI-based VNA Corp., a unit of Germany-based Verbio Vereinigte BioEnergie AG, which designs, builds and operates biogas production facilities. The proposed Kansas facility is one of 50 plants under development in the RNG sector, which includes 84 existing facilities.

The fuel source in Kansas is slated to be more than 75,000 metric tons of “straw and stover” (corn leaves, stalks and cobs) for the proposed plant’s first phase of development, VNA officials told the county planning commission earlier this month. The company is seeking an industrial zoning designation and conditional use permit for the rural site.

Ultimately, VNA needs separate approvals from the 10-member county planning panel and from the three-member county commission. “We’re optimistic that all approvals will be granted by the end of the year,” said CFO Rand Dueweke.

VNA expects to start construction in December and have the production site operational in January 2020, he said.

The company has said the project could create up to 225 jobs and $3.5 million annually in proceeds for area farmers. Nevertheless, there are some concerns about the amounts of water required by the proposed facility, according to reports.

“We are continuing to see growth in the domestic renewable natural gas market to add to the RNG production facilities in North America,” said RNG Coalition spokesperson Marcus Gillette.

VNA bids to be the fourth operator of a RNG production facility in Kansas, having identified 160 acres along the Ninnescah River in an area that has a natural gas distribution pipeline and an electric utility substation.

Formed in January, VNA plans to develop, own, operate and finance multiple biomethane and RNG plants in the United States using proprietary technology.

“We do not have any other RNG production plants in North America yet, but have many other sites under development which have not been announced,” said Dueweke. Verbio serves about 20% of the market in Germany with RNG in the form of compressed and liquefied natural gas.

Dueweke would not speculate on the future size of the RNG market in North America, but he said VNA plans to have 100 million-plus gallons of RNG capacity online in the United States within the next five years. The federal government has targeted 7 billion gallons of production for RNG this year, and the sector can probably only produce about 5% of that total, he said.

VNA is looking to complete construction of multiple plants in the Midwest over the next five years. Each plant would ultimately utilize at least 200,000 tons/year of corn stover and/or wheat straw as feedstock, and would produce at least 20 million gallons of RNG. The plants are expected to cost $50-100 million, according to VNA’s website.

“We are looking at numerous potential sites in Kansas, but also in other states as well, basically most of the corn/wheat belt in the United States, which is where the feedstocks are located,” Dueweke said.

Midcontinent oil and natural gas activity improved during the first quarter, climbing higher than year-ago levels for the first time since March 2019, according to the Federal Reserve Bank of Kansas City. The Kansas City Fed, as it is better known, compiles energy activity every quarter for the Tenth District, which encompasses firms headquartered in…