A wastewater-derived compressed natural gas (CNG) has rocked into prominence in Grand Junction, CO, for fueling transit bus and waste-hauling fleets, the sixth location nationally for the renewable version of CNG used in natural gas vehicles (NGV) of all sizes. 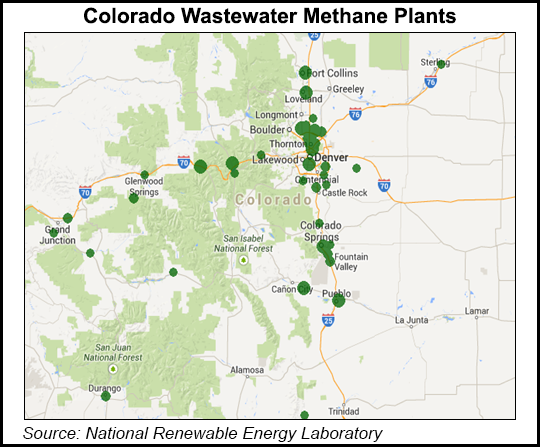 A Madison, WI-based company named for its product, BioCNG, is slated to design and build a biogas conditioning system and gas pipeline for the Persigo wastewater treatment plant, owned by the City of Grand Junction and Mesa County. The system will produce about 500 gasoline gallon equivalents (GGE) daily from the Persigo digester gas.

The renewable CNG will be transported by a six-mile pipeline to an existing CNG fueling station in Grand Junction. There, both Grand Valley Transit CNG buses and the city’s refuse trucks will be fueled, along with street sweepers and general utility pickup trucks.

Both the city and the transit system are continuing to add CNG vehicles to their fleets, a BioCNG spokesperson said.

In the CNG fueling system arena, a new fuel system for Class 8 over-the-road tractors used in long-haul trucking will provide both back-of-cab and side-saddle configurations for the tractors’ fuel storage. South Carolina-based Mainstay Fuel Technology is making the storage, management and delivery systems for the tractors; Fontaine Modification is delivering and installing both optional system placements.

Mainstay manufactures CNG fuel storage and delivery systems for Class 6, 7 and 8 trucks with both back-of-cab and side-saddle installations.

Elsewhere, one of a series of seven new CNG fueling stations opened in Amarillo, TX; two new ones were announced for travel stops in Oklahoma; and U.S. Oil’s CNG fuel station unit announced a deal with a food distribution company in Indianapolis.

Amp Trillium announced the first public access CNG fueling station in Amarillo. It is the second of seven public stations Amp Trillium is developing for the Dairy Farmers of America and Select Milk Producers. The first station in the portfolio was opened earlier in July in Waco, TX.

In Oklahoma, Love’s Travel Stops said the company will continue to add CNG fueling; the next two locations will be in Ardmore and Webbers Falls, OK. These will be fueling stops for heavy-duty CNG trucks.

In Indiana, U.S. Oil’s Gain Clean Fuel unit plans to build a Gain CNG station to support the operations of Delco Foods, an Italian and specialty food distribution company based in Indianapolis.

Gain General Manager Bill Renz said the Indianapolis location continues the company’s building of a national CNG network of stations. “We continue to see fast-paced growth in CNG demand throughout the United States and the Midwest.”