Less than a year after General Electric Co. (GE) combined its oilfield business with Baker Hughes Inc., which created the second largest oilfield services (OFS) company by revenue, the venture appears to be paying dividends, while the backlog grows and costs decline. 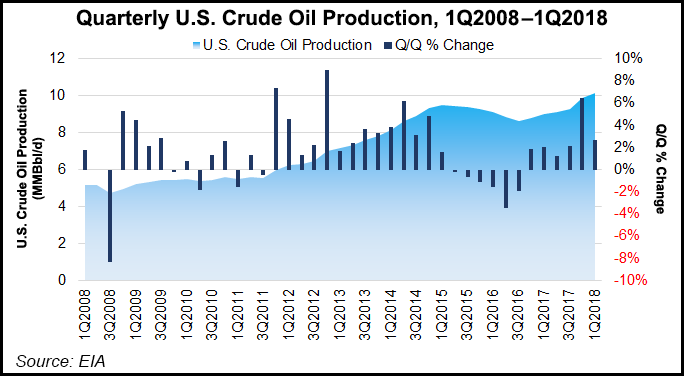 In a conference call Friday led by CEO Lorenzo Simonelli, the management team for Baker Hughes, a GE company (BHGE), discussed first quarter results in a call that came shortly after No. 1 operator, Schlumberger Ltd., issued its report, citing growing optimism for the OFS sector.

Simonelli, who took the helm when the combination was completed last summer, also sees more blue skies, not only for the OFS business but also a growing liquefied natural gas (LNG) market.

“We made strong progress in the quarter, securing several key commercial wins, executing on our synergy targets and delivering for our customers,” Simonelli said. “In the first quarter, we delivered $5.2 billion in orders and $5.4 billion in revenue. As expected, we saw growth in our shorter-cycle businesses and declines in our longer-cycle businesses versus the previous year.”

A lot of the expansion now and in the future is tied to U.S. unconventionals growth in oil and natural gas.

“In the oil market we see global demand rising at a steady pace, driven by an improved gross domestic product outlook for the United States and Europe,” the CEO told investors. “In Asia alone, strong economic growth is expected to add nearly 1 million b/d of demand in 2018.

“On the supply side, U.S. production grew to more than 10 million b/d, with first quarter average production up 7% versus the fourth quarter of 2017, driven mostly by shale.”

Giving a nod to the Organization of the Petroleum Exporting Countries, i.e. OPEC, and ally Russia, which have committed to production cuts to the end of this year, Simonelli said the draw on U.S. crude inventories “have pulled stocks closer to the five-year average. These factors have resulted in a market equilibrium, which we expect will keep crude prices relatively rangebound in 2018.”

Recent price stability “has resulted in a customer spend forecast that shows solid year/year growth for our short-cycle businesses, particularly in North America, where operators continue to grow rig count and well counts.”

Exploration and production customers are expected to increase their upstream capital expenditures (capex), with a caveat, he said.

“We continue to see them focused on capital discipline and limiting their capex spend to within their operating cash flows. We are seeing this both internationally and with the large independents in the United States.”

Meanwhile, BHGE is readying for a steady global energy shift to natural gas. BHGE expects LNG demand to more than double to 500 million metric tons/year (mmty) by 2030, “growing at a pace of 4-5% per year,” Simonelli said.

Increasing LNG demand, coupled with the dearth of project final investment decisions (FID), “point to the LNG supply-demand balance tightening,” said the CEO. “Market data suggests that new LNG capacity is required in the early to mid next decade to meet demand, which should translate to project FIDs for which we are well-positioned.”

BHGE’s outlook for LNG “is becoming increasingly positive,” but “we did not see any project FIDs in the first quarter. We expect projects will begin to move as we progress through 2018.”

“In our OFS segment, we continue to focus on growing share in key markets, including North America and the Middle East, through leading technology and services and flawless execution for customers. This quarter, we secured several critical commercial wins, and our synergy efforts led to improved margin rates.”

During 1Q2018, BHGE delivered $144 million of synergies through the Baker-GE combination, and the 2018 total year commitment of $700 million “remains firmly on track,” the CEO said.