Denver-based Berry Petroleum Co. said Wednesday it expects to see its natural gas assets in the Piceance in Colorado and East Texas Haynesville/Bossier Shale decline this year as its continues to target its investment toward oil assets in the Uinta and Permian Basins. 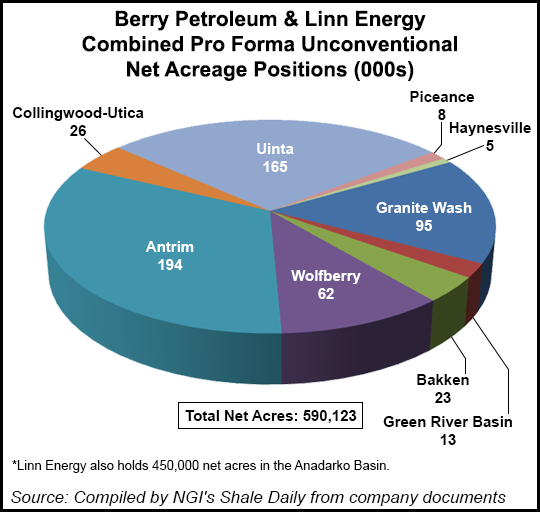 A merger to become a unit of Linn Energy LLC was set to be completed on Sept. 30 (see Shale Daily, Sept. 13). Linn also is focused on oil.

CEO Bob Heinemann said Berry’s main focus of an “oil-growth strategy” is on five assets in three “oily basins” as part of a 3Q2013 earnings report, showing net earnings of $28.1 million, or 50 cents/diluted share, compared with $61.3 million, or $1.10/diluted share, for 2Q2013. Berry did not host a quarterly earnings conference call.

Overall, Heinemann said Berry expected 2013 production to exceed forecasts, averaging in the 40,500-40,800 boe/d range. Capital spending will top out at about $600 million, and oil production will account for about 80% of the company’s output this year.

Earnings from oil assets were up about 6% in the quarter, said Heinemann, adding that new steam flood and diatomite operations in California and performance of the Uinta assets “were particularly encouraging.”

Natural gas production from the Piceance and East Texas was down about 6% in 3Q2013 (4,178 boe/d). “The company expects production from these assets to decline by approximately 1,300 boe/d in 2013 as it continues to focus capital investment on development of its oil assets,” a Berry spokesperson said.

Oil production in Uinta averaged 8,055 boe/d in 3Q2013, up 10% from its levels in the second quarter this year. “The company continued to focus on vertical commingled Wasatch/Green River wells, and there were 31 net wells drilled in the third quarter,” the spokesperson said. The market for this production continues to expand outside of Utah, he said.

The company said it drilled 11 net wells in the Permian using a three-rig drilling program. So far, production this year is up 22% over levels achieved last year.