Natural gas markets — both futures and day-ahead — were spilling red ink everywhere Thursday, as summer cooling demand can’t come soon enough for the bulls. After the previous day’s losses, the bears already had a grip on the market, but a double dose of bearish news from the Energy Information Administration’s (EIA) Thursday morning storage injection report sent cash and futures tumbling again. 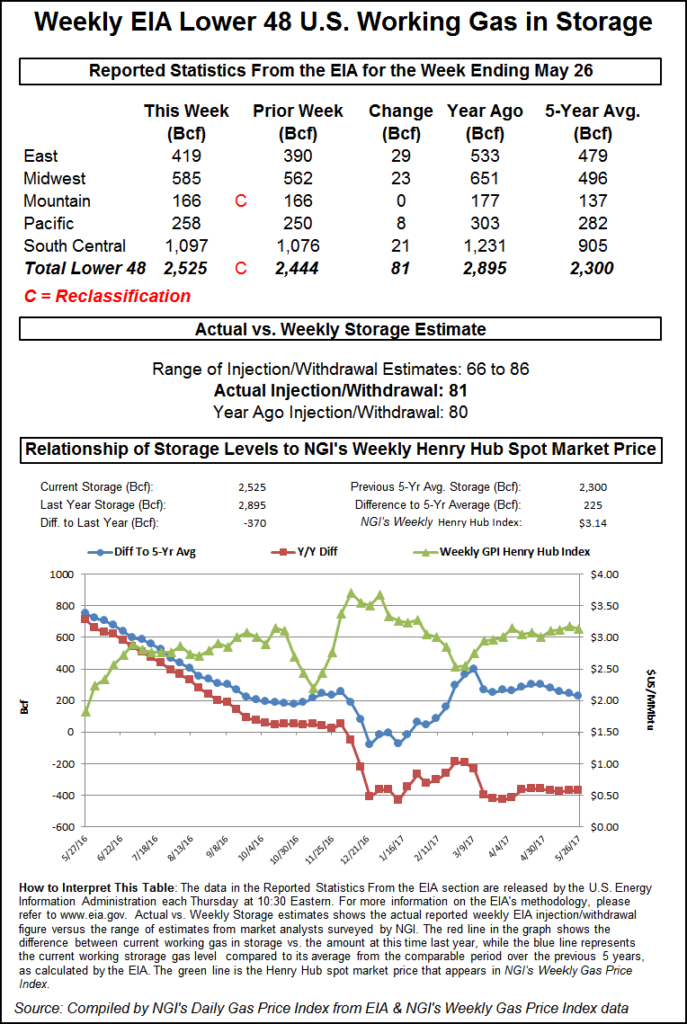 July natural gas fell decidedly lower for the third straight day, contemplating a dip below $3/MMBtu before settling at $3.008, down 6.3 cents. In the day-ahead, the NGI National Spot Gas Average gave up another 7 cents to finish at $2.66 — a new 30-day low.

The bears were large and in charge Thursday morning after digesting a larger-than-expected storage injection report, which appeared even higher thanks to a reclassification from working gas to base gas.

EIA reported that 81 Bcf was injected into underground stores for the week ending May 26, but the reclassification pushed the implied flow for the week to 85 Bcf. The news prompted front-month natural gas futures to probe psychological support at $3.

In the minutes leading up to the 10:30 a.m. EDT release, the July contract was hovering around $3.070, which is near where it finished Wednesday’s regular session. In the minutes that immediately followed the report, the prompt-month contract plunged and notched a $2.994 low just before 11 a.m. EDT as the 81 Bcf injection, as well as the implied 85 Bcf build, were both bearish compared to industry expectations.

Still, some analysts see things balancing out by fall.

“We continue to see the storage glut being drawn down through the summer months, with a Nov. 1 storage estimate of 3.8 Tcf,” wrote Jefferies LLC analysts Zach Parham and Michael Hsu, who added that they remain bullish on gas prices.

“Despite our recent reduction in our 2018 gas price forecast (to $3.30, from $3.50), we remain bullish on natural gas on a tighter supply/demand balance (excluding weather), with a $3.50/MMBtu long-term price forecast.”

“The reported figure was 4 Bcf above consensus but 1 Bcf below last year and 17 Bcf below the five-year average of 98 Bcf,” Wells Fargo analysts said Thursday. “This marks the third week in a row that storage has come in above consensus estimates, missing by an average of 5 Bcf per week. But despite that bearish sign, based on our storage model this data point continues to indicate that the natural gas markets are running more than 2 Bcf/d undersupplied, and our analysis shows that this state of undersupply will likely persist throughout the summer.”

But even with analysts viewing gas as undersupplied, the weather hasn’t cooperated so far. The market is working its way out of the shoulder season in fits and starts.

The July contract had gained some ground overnight as forecasts suggested a potential increase in cooling degree days (CDD) heading into the weekend, and a warm revision in the afternoon forecasts was starting to help July gain its footing in after hours trading late Thursday.

“The rest of the afternoon weather data was a little hotter overall for mid-June, highlighted by the European weather model trending warmer, which had been the coolest of the models,” NatGasWeather.com said in a Thursday afternoon update. “Prices were already a few cents above $3, but added a couple cents more…with the late afternoon data almost finished.”

Natural gas analytics firm Genscape Inc. said in a morning note to clients that it sees “prospects for some demand bumps in coming days, with forecasts calling for above-normal heat, but the timing may limit the demand gains as the most intense heat hits during the weekend.

“Genscape meteorologists are forecasting Lower 48 population-weighted CDDs to run above normal through Sunday. CDDs are expected to peak Saturday at 75.6 CDDs versus the normal of 55.2 CDDs. Temperatures next week are once again expected to retreat to cooler than normal.”

But despite prospects for near-term improvement, the bearish storage report appeared to be weighing down gas priced for Friday delivery, as points across the country charted 30-day lows Thursday.

Points in the Rockies led the declines, with Kern River giving up 15 cents to finish at $2.52. SoCal Border Average dropped 15 cents as well to $2.60.

In the Northeast, where the National Weather Service six-to-10 day outlook continues to call for below-average temperatures, Transco Zone 6 NY fell 10 cents to $2.48. Algonquin Citygate, exiting a period of maintenance-related constraints, gave up 10 cents to finish at $2.30.

Heading into the report, most consensus industry estimates were for a build in the 66 to 78 Bcf range. A Bloomberg survey predicted an injection ranging from 66 to 78 Bcf with a median build of 69 Bcf for the week ended May 26. IAF Advisors called for a 73 Bcf injection, while Stephen Smith Energy Associates revised upward its weekly gas outlook estimate to call for a 79 Bcf build. A Reuters survey called for an injection ranging from 73 to 86 Bcf with an expectation that 78 Bcf would be injected.

Last year’s injection for the corresponding week was 80 Bcf, while the five-year average build stands at 97 Bcf.