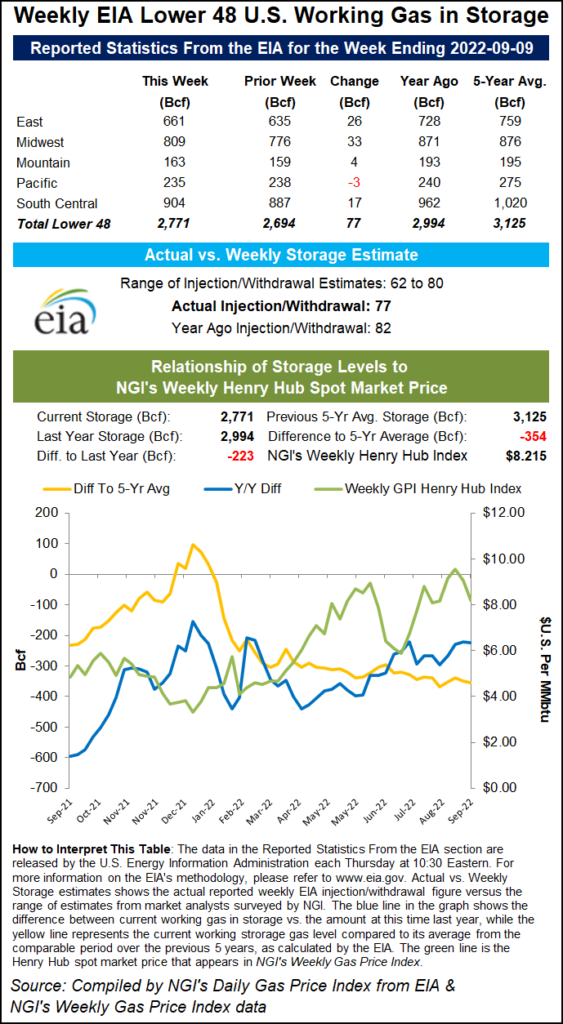 The build kept inventories below average levels, but analysts on the online energy platform Enelyst said it reflected mounting production levels that could help narrow deficits as the market moves into shoulder season.

Production early this month reached record levels above 100 Bcf/d, according to Bloomberg estimates, and output continues to hold near that level this week.

After jumping 83.0 cents on Wednesday, the October futures contract was down 67.2 cents at $8.442/MMBtu prior to the 10:30 a.m. ET inventory report. Among a multitude of factors driving a five-day rally through Wednesday was the threat of a railroad workers strike that could have curtailed coal deliveries and, in turn, increased natural gas demand.

However, before markets opened Thursday, President Biden announced an agreement to avert a walkout, alleviating coal delivery concerns and removing an arrow from bulls’ quiver.

The government’s inventory report, meanwhile, furthered the case for bears.

Prior to the EIA report, major polls found analysts expecting a slightly bullish result relative to the five-year average.

A Bloomberg survey found a median prediction for a 71 Bcf increase. Injection predictions ranged from 62 Bcf to 80 Bcf. Reuters’ poll found estimates spanning builds of 64 Bcf to 78 Bcf, with a median estimate of 72 Bcf. The Wall Street Journal’s survey landed at an average injection expectation of 75 Bcf. Estimates ranged from 70 Bcf to 78 Bcf.

The build in the comparable week of 2021 was 78 Bcf and the five-year average was 82 Bcf, according to EIA.

The 77 Bcf injection for last week lifted inventories to 2,771 Bcf but left stocks below the year-earlier level of 2,994 Bcf and the five-year average of 3,125 Bcf.

By region, the Midwest and East led with injections of 33 Bcf and 26 Bcf, respectively, according to EIA. The South Central increase of 17 Bcf followed and included a 12 Bcf increase in nonsalt facilities and a 5 Bcf build in salts.

Mountain region stocks increased by 4 Bcf. Pacific inventories declined by 3 Bcf as California grappled with an intense heat wave during the covered period.

Looking ahead, analysts on Enelyst were looking for a build with next week’s print as high as the low 100s, citing the production increase. If that proves to be the case, it would mark only the second triple-digit increase of the current injection season.

“Next week should be a showstopper, given the clear production bump and all,” said The Desk publisher John Sodergreen.