After chalking up 12 consecutive years of growing natural gas production, the British Columbia (BC) government is courting industry to keep up the momentum with programs that counter price weakness. 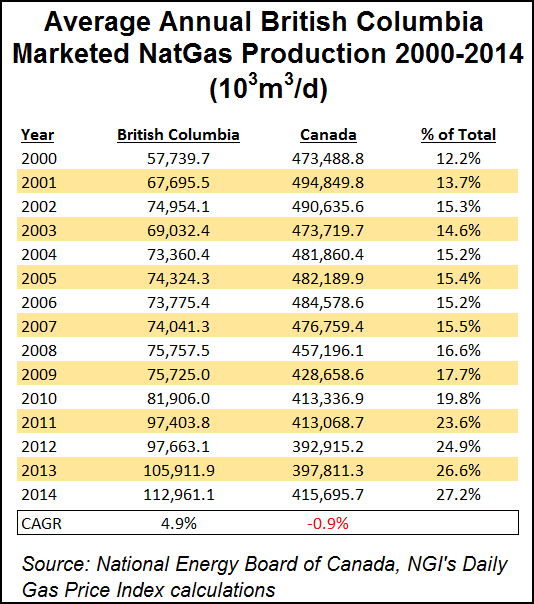 “We know we are not only competing across Canada, but also across the United States,” said Ines Piccinino, acting deputy minister of the BC Ministry of Natural Gas Development.

Piccinino led a mission Thursday into the heart of Canada’s gas and oil industry in downtown Calgary, where a full house of corporate, financial and professional figures attended a BC Day held by the Canadian Society for Unconventional Resources.

BC representatives recited a long list of attractions ranging from one-stop shopping “single-window” regulation to a template for special, quarter-century deals on provincial gas royalties for large production projects.

The invitation to venture northwest into BC forests, muskeg swamps and foothills on the eastern side of the Rocky Mountains — a region long known as the gas and oil “near frontier” — coincided with Alberta announcements that annoyed the industry.

The left-leaning New Democrats who shocked Alberta business and government elites by wresting power from a 44-year-old Conservative regime in the provincial election May 5 started course changes for climate change and royalty policies.

Alberta ND Premier Rachel Notley, meanwhile, laid out “the process going forward” for a wide-ranging review of provincial gas and oil royalties and related energy policies. Corporate and financial captains deplored the exercise as causing “uncertainty” liable to impair investment and employment for as long as it lasts.

While BC has embarked on a climate change policy review, the Canadian west coast province has no counterparts to Alberta’s heavy industry establishment of thermal oil sands complexes, coal-fired power plants and petrochemical sites.

The cleanest fossil fuel, natural gas, has to date accounted for 80% of BC’s resource endowment and there is no sign of a big change, reported provincial earth scientists.

A “fantastic database” to guide exploration is emerging from mandatory disclosures of results from wells drilled into BC’s provincially-owned gas and oil deposits, said Fil Ferry, director of the government’s petroleum geology branch.

“We are always available” to deal with requests and queries arising from provincial sales and administration of drilling and production leases, said Garth Thoroughgood, executive director of the provincial mineral rights tenure and geosciences branch.

Extension of royalty credits granted for building new industry infrastructure such as roads is being considered, said program chief Richard Grieve. The credits currently cover up to 50% of costs for a year of installation work, and may grow to time spans of up to three years, he said.

A recently announced 23-year deal on royalties with an Asian entry in the 18-project lineup to build liquefied natural gas (LNG) export terminals on BC’s Pacific Coast is a template for all big development projects such as processing plants, said policy director Geoff Turner.

Alberta has no counterpart to the arrangement, which is modeled on an Australian program for encouraging LNG development. The BC template sets royalties in a moderate range of 6% to 13%, rising gradually over time, and uses a formula that effectively caps the levies to let producer shares of production revenues grow when gas prices increase.

A helpful major projects office has been added to the BC Oil and Gas Commission, said Ken Paulson, the agency’s chief operating officer. The special section holds the hands of industry sponsors to ensure they make the right plans and contacts through the planning and consultation phases of developments big enough to require environmental assessments, Paulson said.

In northern BC, home to big aboriginal communities with large unsettled land claims, “First Nations consultation is really a critical factor,” said Paulson. He added that much of the new staff added lately to the commission is focused on relations with the native population.

No Canadian jurisdiction is more advanced in dealing with environmental issues than BC, added commission specialist Sean Curry. Land use plans have been completed for 90% of the Texas-sized province, and special conservation protection has been put on 37%. “The big-ticket decisions have been made,” Curry said.

A BC approach known as area-based analysis has established measurements of cumulative disturbances of features such as water quantity and quality, old-growth forest, wetlands, wildlife and air quality. The system enables industry and regulators alike to address potential effects and mitigation requirements in a systematic manner during early stages of project development.

Industry is responding favorably to the evolving suite of BC policies, the government reported.

BC’s share of Canadian gas production, previously 20% until the mid-2000s, has grown into the range of 28-30% and is continuing to rise. Liquid byproducts output has jumped by 25% this year alone.

Industry shows signs of using the large drilling spreads acquired at lease auctions such as a banner sale last November, when companies paid C$209 million (US$167 million) for rights in the Montney shale region alone. The number of well permit applications is “a little down but we’re still busy,” Paulson said.

Like all his BC government peers, Paulson said no one believes that all the BC LNG projects can possibly make it into construction but that the terminal and pipeline sponsors are still striving to advance them. “One thing is for sure. We’ve got a lot of gas in BC and we’re producing more and more of it — it’s up every month this year. It doesn’t really show any sign of changing.”