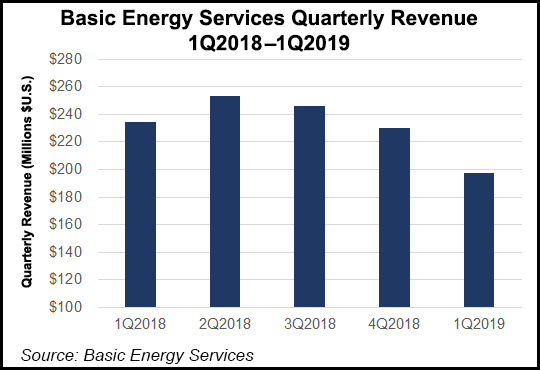 The Fort Worth, TX-based oilfield services operator reported 1Q2019 results in line with initial expectations, as well completions slowed on winter weather interruptions, CEO Roe Patterson said. The production service businesses “outperformed expectations,” with margin improvement in part from a strategic realignment, “which allowed our total company’s direct margin percentage to expand during the period despite the negative impact of the payroll tax reset in the first quarter…

“We remain bullish on our business for 2019 and are focused on maintaining capital flexibility and allocation discipline; therefore, we are moderating our plans for capital expenditures this year from $94 million to $69 million.”

Under the updated capital expenditure plan, management expects growth capital “will be spent judiciously on long-lived water assets and equipment to support 24-hour rig packages with the expected highest return to Basic.”

Well Servicing and Water Logistics provided stability and growth in the quarter, with combined direct margins of $31.6 million, up $3.9 million sequentially.

The company in the first three months averaged a total of 21 24-hour service rig rental equipment packages. At the end of April, 22 active equipment packages on average were in place, versus 21 in 1Q2019. Revenue servicing rig hour/well was $367 in 1Q2019, flat sequentially but 9% higher year/year.

In Water Logistics, revenue of $55.6 million was flat sequentially and down from $56.5 million a year earlier. The weighted average number of fluid services trucks decreased 2% sequentially to 818 and was down 15% from a year ago, “driven by the structural change taking place in the industry where increasing volumes of fluids are moving through pipelines, a significantly lower-cost alternative for our customers,” management noted.

In the Completion & Remedial Services business, revenue decreased by 29.5% sequentially to $76.8 million and was off from $117.6 million in 1Q2018. Basic blamed the decline primarily on lower fracture activity and pricing, “as customers curtailed completion activity due to lower oil prices in late 2018 and in early first quarter of 2019, as well as weather impact.”

During 1Q2019, Basic created an “Other Services” segment, which combines contract drilling with the manufacturing entity. Other Services revenue decreased by 40% sequentially to $4.3 million. During 1Q2018, after giving effect to the realigned segments, the segment generated $3.6 million in revenue.

Basic marketed 11 drilling rigs during 1Q2019, as well as in the first and fourth quarter of 2018. Revenue/drilling day in 1Q2019 was up 10% sequentially and 40% higher year/year because of higher rates.

“The focus of our expansion capital will be strengthening our position in the growing and attractive water disposal midstream services line of business,” management said. About 70% of 2019 growth capital is expected to be directed to long-lived water midstream infrastructure projects and SWD utilization “as oil production and residual water disposal demand in our operating areas continues to increase.”