Oil has lost more than half of its relative price premium to natural gas in the past few months, with the ratio of Brent crude Henry Hub hitting its lowest level since 2009 at the end of November, but a retracement is expected in 2019, according to Barclays Research. 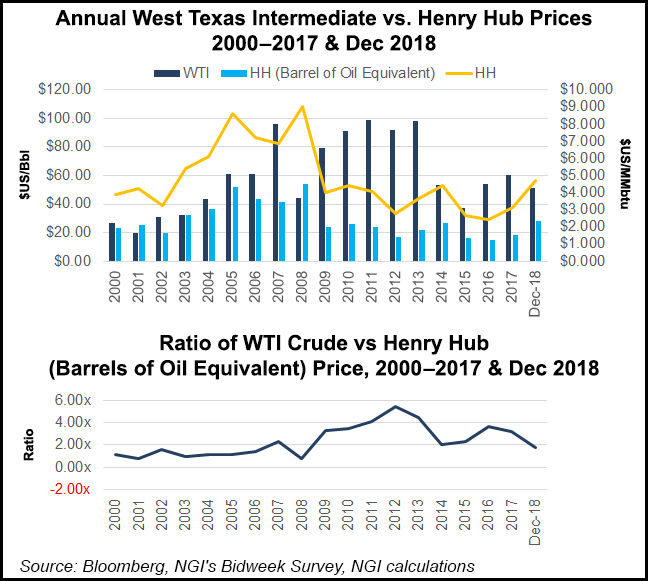 Analysts Samuel Phillips and Michael Cohen in a recent note to clients said they expect the oil-to-gas ratio should improve, as Barclays price deck calls the Brent-Henry Hub ratio to increase, nearly doubling to 27-28 by 2Q2019.

“The relative price of oil and gas affects the economics of various infrastructure investments across the energy industry, and the recent fall off might act as a fly in the ointment to development plans in the short term and could lead to delays,” Cohen and Phillips said.

Oil and gas prices have diverged sharply since the beginning of October. On Friday (Dec. 21), the West Texas Intermediate oil price ended at under $46/bbl, its lowest level since August 2017.

The weakening macro outlook and uncertainty about production cuts by members of the Organization of the Petroleum Exporting Countries (OPEC) has shattered the price of crude by nearly 30% from a high set earlier in the fall.

Meanwhile, natural gas prices have risen by more than 50%, “thanks to a confluence of bullish factors, including cold weather, low inventories, and strong export demand,” the Barclays team noted. The New York Mercantile Exchange (Nymex) rally “ran to nearly $5/MMBtu at its peak — highs not seen since the polar vortex winter of 2013/14.”

Barclays analysts admitted that they don’t believe in the “staying power of the either the natural gas rally or the decline in oil,” but current Nymex futures “have led to a significant revaluation of the comparative value of oil versus natural gas.”

Production cuts announced in early December by OPEC and its allies were expected to help tighten the market, while surging gas production was seen easing short-term concerns about tight storage levels, noted the analysts.

“This forecasted retracement in oil and gas prices would yield a sharp rise in the oil-gas ratio closer toward historical averages,” Cohen and Phillips said. “Our price deck calls the Brent-Henry Hub ratio to increase to nearly double from recent lows to 27-28 by 2Q2019. Futures for next year show a similar increase, although to a lesser extent, as we are comparatively higher on oil and lower on gas.”

In the longer term, oil still is viewed as the premium fuel, they said.

The gyrations in the oil-gas ratio mostly have been confined to the front of the curve, however.

“Calendar strips for 2023 show that Brent’s premium over Henry Hub is still above historical averages,” they said.

The contraction in the oil-gas ratio could lead to LNG project delays, particularly for facilities that are later in the development queue.

“Although we believe the Brent-Henry Hub will revert in the coming months, the current downturn represents a potential headwind to those U.S. LNG export projects looking to reach final investment decision (FID) over the next year and become one of the ”second wave’ of LNG terminals,” analysts said.

“Excluding the sunk cost of liquefaction, the variable cost to ship gas from the Gulf of Mexico to Asia has risen to about $8/MMBtu, while the variable cost to Europe is more than $6/MMBtu,” noted analysts. “These higher costs have chipped away at potential export arbs which, while still positive, are down more than two-thirds from recent highs.”
Shipping costs also are increasing, and they play a role in the export margin contraction. Rates to charter LNG vessels have increased to as much as $200,000/day in Asia, with some participants said to be using LNG vessels as floating storage.

“Moreover, this winter represents a litmus test for how U.S. LNG exports will respond when domestic prices rise and the export arb shrinks,” said Cohen and Phillips. “Given these headwinds, we believe that delays to FIDs are a possibility.”
Meanwhile, the outlook for oil prices continues to dim. Raymond James & Associates Inc. on Friday reduced its full-year 2019 forecast for West Texas Intermediate (WTI) to $62/bbl from $77.50, with Brent reduced to $72 from $90. The bulk of the reduction is likely to be in the first half of the year. The long-term price deck forecast remains $75 WTI and $80 Brent.