Producers in North Dakota’s Bakken Shale play are beginning to come to grips with operating without the Dakota Access Pipeline (DAPL) that is now under court order to shut down and be drained by early August. 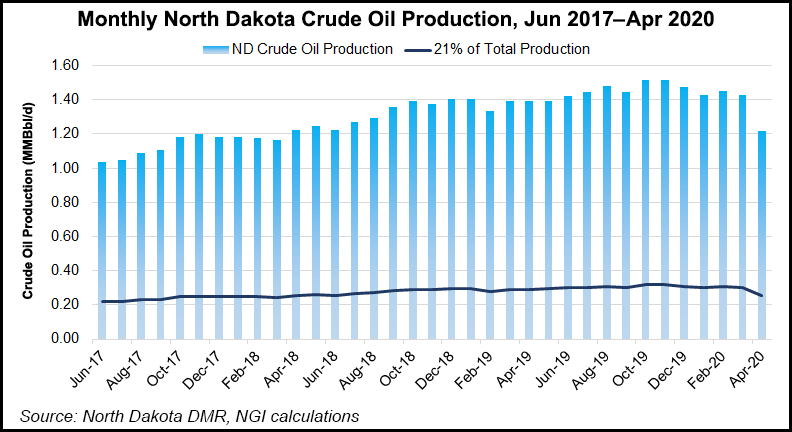 The immediate challenges are how to move up to 300,000 b/d to Gulf Coast refineries, and longer term up to 500,000 b/d, said Justin Kringstad, director of the North Dakota Pipeline Authority.

Bakken producers are grappling with the aftermath of an order from the U.S. District Court for the District of Columbia directing Energy Transfer LP to temporarily halt operations on the 1,172-mile, four-state DAPL within the next 30 days while an environmental impact statement (EIS) is completed. The EIS may take more than a year.

Earlier in the year, before all the shut-ins caused by the coronavirus and the crash in global energy demand, 69% of the Bakken’s 1 million-plus b/d were shipped by pipeline and 21% went by rail, Kringstad told NGI’s Shale Daily. “Refining and trucking in Canada made up the remaining 10%.”

Ron Ness, president of the North Dakota Producers Council, called the federal district order “judicial overreach” and warned it would have profound economic and safety impacts.

“Shutting down the pipeline will have a greater negative impact on safety than any environmental benefit the court is claiming to gain, putting more trucks on our roads and more rail cars on the tracks, nearly 900 railcars a day,” Ness said.

North Dakota Gov. Doug Burgum said he expects the decision to be appealed given the “devastating effects” he sees for the state’s economy and the nation’s energy security. Burgum said if a single judge can shutdown a pipeline that has been running safely for more than three years, then it could have a “chilling effect on America’s ability to build, modernize and improve our critical infrastructure.”

“For all practical purposes, rail will be the only feasible option,” said Kringstad, who added that any trucking just goes north to a Canadian pipeline. “From a large-scale perspective, rail would be the option.

Kringstad said North Dakota’s attorney general is looking at the state’s legal options, and he is prepared to support whatever option is chosen. North Dakota earlier filed an amicus brief in the case, seeking to avoid the ultimate negative ruling.

“I think most of the industry was somewhat surprised by the decision, and right now there is a whole lot of work being done to determine the next steps of what this will look like going forward, and how barrels will need to shuffle.”