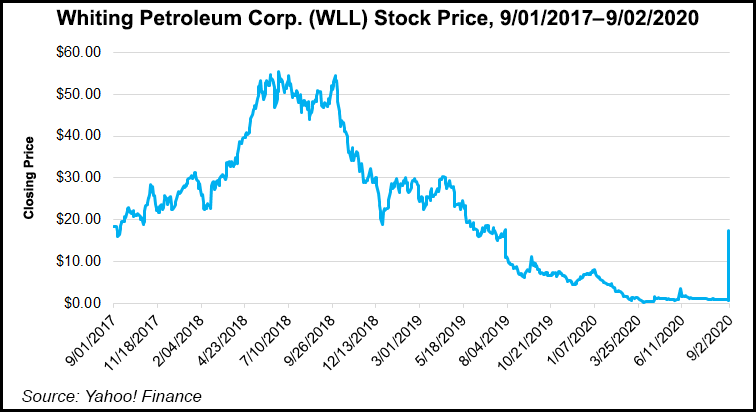 The exploration and production (E&P) operator filed for voluntary protection under Chapter 11 in March as Covid-19 began to smother oil and gas demand. Whiting’s largest E&P projects are in the Bakken Shale and Three Forks plays in North Dakota, where it is one of the top producers. It also has stakes in the Niobrara formation in northeastern Colorado.

“We are excited to begin our new chapter at Whiting, with a focus on capital discipline and free cash flow generation to create long-term value for our shareholders,” said newly appointed CEO Lynn Peterson.

Peterson, who has 40 years of industry experience, was chair, CEO and president of Colorado pure-play SRC Energy Inc. from May 2015 until January, when Denver’s PDC Energy Inc. completed its tie-up. Peterson also co-founded Kodiak Oil & Gas Corp. and served as CEO/chair until 2014, when it was acquired by Whiting.

Former SRC CFO James Henderson was tapped as the new financial chief. He succeeded Correne S. Loeffler, who resigned to pursue other interests. Whiting COO Chip Rimer is to continue in his role.

Under the restructuring, $2.4 billion in pre-petition senior unsecured notes were equitized. Pro forma for the reduced credit balance, Whiting has $3.0 billion less debt. The new common stock symbol is “WLL.”

The seven-member board is now led by Chair Kevin McCarthy and Peterson, along with Janet L. Carrig, Susan Cunningham, Paul Korus, Daniel Rice and Anne Taylor.