New data from the Pennsylvania Department of Environmental Protection (DEP) show large infrastructure expansions that occurred in the state last year only marginally reduced the backlog of wells there, despite a significant increase in annual production. 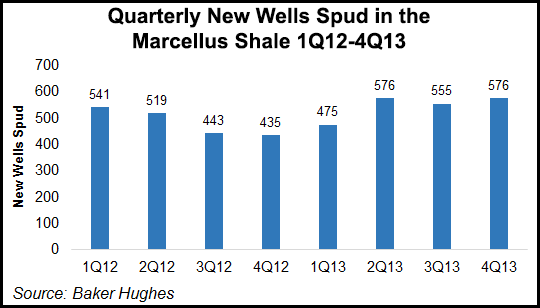 According to the DEP’s 2013 production data, operators produced an astonishing 3.3 Tcf of natural gas in Pennsylvania last year, up from 2.04 Tcf in 2012 (see Shale Daily, Feb. 20a). In a commodities research note released by Barclays Capital on Friday, the bank said a sizable inventory of backlogged wells in Pennsylvania means that production could grow even more there this year.

But despite rapid production growth and roughly $2.4 billion in infrastructure investments in the Northeast last year, Barclays analysis found that the state’s backlog shrank only modestly in the latter half of 2013, compared to earlier reporting periods.

A total of 1,336 wells remained offline heading into 2014. That’s compared with 1,563 backlogged wells that remained in the first half of 2013 and 1,432 during the second half of 2012. Those totals include wells reported as temporarily shut-in and those that are reported as “spud but drilling not completed” at the end of each reporting period.

The number of new wells spud in the Marcellus Shale has ranged pretty tightly between 555 and 576 the last three quarters, according to Baker Hughes data.

A number of Appalachian operators, including Cabot Oil and Gas Corp., Carrizo Oil and Gas Inc. and Rex Energy Inc., among others, recently said they will focus more heavily on connecting a backlog of wells to sales during the next few months more than they will on drilling new ones (see Shale Daily, Feb. 20b; Feb. 21; Feb. 25a).

“Combined with our recent update to upcoming infrastructure expansions in the region, these data reiterate our view that natural gas production in the U.S. Northeast could repeat last year’s stellar growth trajectory in 2014,” analysts at Barclays wrote in their note.

It is worthwhile to note that much of the new infrastructure went on line toward the end of the year, so the production tallies do not represent a full year of operation of the new capacity.

In a separate analysis, the Marcellus Center for Outreach and Research said operators will spend nearly $1 billion per year on midstream infrastructure from 2014-2016 (see Shale Daily, Feb. 25b).