Coming off better-than-expected earnings in the Pacific Northwest and Alaska, Avista Corp. executives indicated Wednesday they are undeterred by current electrification trends, reaffirming that the utility arm remains all-in for natural gas. 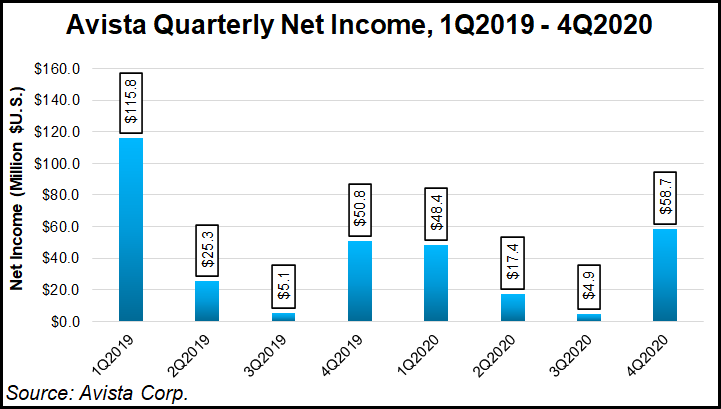 CEO Dennis Vermillion said he thinks the climate change mitigation push to minimize greenhouse gas emissions needs a “holistic approach” that would take into consideration reliability of the regional natural gas and electric energy systems, as well as the cost impacts on customers.

That said, executives of the Spokane, WA-based company are keeping an eye on a bill that languished this session in the Washington legislature, House Bill (HB) 1084. The bill does not consider the impacts, Vermillion told analysts during a year-end and 4Q2020 earnings conference call.

“We have been working with other utilities and stakeholders to educate the lawmakers about the serious concerns we have with the bill, and the serious impacts it would have on our customers,” he said. “The good news is that the bill is basically done for the year; it has been defeated for this session, although some components of the bill are likely to come back at some time in the future.”

HB 1084 was pulled from the list of bills to receive a vote in the executive session on the cutoff deadline day, spokesperson Laurine Jue said. “This can be interpreted to mean the bill lacked support from a majority of the committee.”

While reporting that the combination gas-electric Avista Utilities benefited from higher margins and lower taxes in 4Q20020, Vermillion emphasized the need to continue to make lawmakers and regulators aware that natural gas needs to “play an important role as U.S. energy systems are decarbonized.”

Natural gas doesn’t need a “pass” as Avista is experimenting with renewable natural gas and other technologies, such as hydrogen and energy efficiency. As it is doing on the electric side, he said Avista will do its part to reduce its carbon footprint on the gas side as well.

“We’re really concerned about the effects of electrification, not only what it would do from an affordability perspective for our customers, but what the ramifications would be on our electric system. Our studies show it would require a doubling of electric infrastructure, including generation, for the full needs to accommodate total electrification.”