August natural gas forward prices fell an average 5 cents from June 27 through July 3 as production continued to push its way to the forefront of market sentiment, while cooler weather that showed up in forecasts also weighed on the market, according to NGI’s Forward Look. 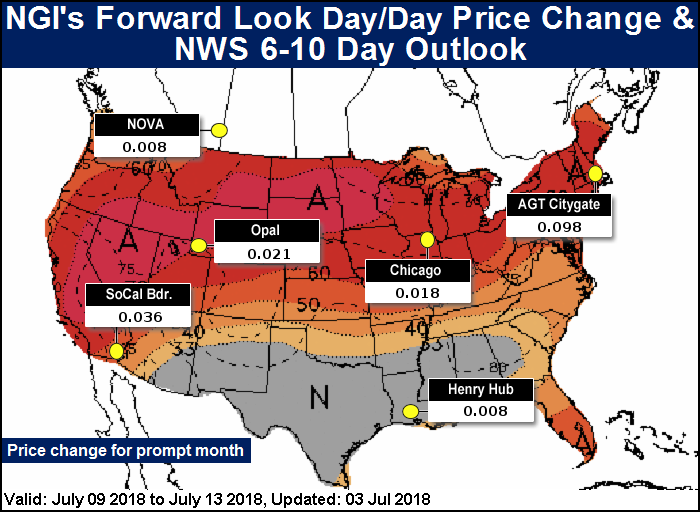 Nymex futures led the way as the August contract plunged 11 cents during the period as the sweltering conditions that have enveloped much of the country were expected to ease by the weekend, thanks to a weather system forecast to sweep across the northeastern United States, according to NatGasWeather.

The latest weather models maintained hotter trends for the middle of next week into the third week of July as a hot ridge was expected to dominate most of the country, especially the east-central United States. The data, however, continued to show bouts of cooling returning to the northeastern United States around July 17-20, shifting the core of the heat dome back towards the west-central part of the country, NatGasWeather said.

This has the data not as hot over the East as would be needed to be considered ominous, it said. “The coming pattern is still a rather bullish one with most of the country warmer than normal and with cooling degree days (CDD) running very high versus normal when totaled weekly.”

Even though the weather data would look more intimidating by being hotter over the East during the July 7-8 weekend and also around July 17-20, the weather forecaster sees several CDDs added to the forecast, especially for the middle of next week and into the following week. “Of course, daily production trends are also important as the markets have seemed to weigh them more heavily in previous sessions than hot temperatures and hefty deficits,” NatGasWeather said.

Indeed, storage deficits have remained a concern thus far this injection season. The Energy Information Administration (EIA) is set to release its weekly storage inventory report on Friday, a day later than usual because of the Independence Day holiday. Last week, the EIA reported a net 66 Bcf injection into Lower 48 gas stocks for the week ending June 22, on the leaner side of market expectations leading up to the report. Last year, EIA recorded a 48 Bcf injection, and the five-year average is a build of 72 Bcf.

But the otherwise bullish injection figure in the report came with an asterisk. EIA said a reported revision “caused the stocks for June 15 to change from 2,004 Bcf to 2,008 Bcf.” The implied net change from June 8 to June 15 increased to 95 Bcf, higher than the 91 Bcf build EIA published in the previous week’s report.

Working gas in underground storage stood at 2,074 Bcf as of June 22, versus 2,809 Bcf last year and five-year average inventories of 2,575 Bcf. Week over week, the year-on-year storage deficit shrank to 735 Bcf from 757 Bcf, while the year-on-five-year deficit increased slightly to 501 Bcf from 499 Bcf, EIA data show.

Energy Aspects analysts noted prior to last week’s report that if consensus missed the EIA print to the bearish side for yet another week, then it would signal that the market was underestimating supply and/or overestimating demand. However, with the market overestimating the storage injection for the week ending June 22, “the theory of underlying bearish bias lacks confirmation.”

While July is off to a hot start, which could limit storage injections in the coming weeks, the intense heat is also coinciding with new highs in production, with output hitting just above 80 Bcf/d on a handful of occasions since the last week of June.

“These opposing fundamental drivers could set up the cash market for a veritable tug of war on price if the pulls on either end of the rope are sustained,” Energy Aspects analysts said.

NatGasWeather said the main question is, “how hot does it need to get for Aug ’18 prices to push back toward $3?” Given the steep sell-off that’s taken place since last week, the markets appear to be saying that it’s still not hot enough to counter negative sentiment associated with record production.

Meanwhile, early estimates for Friday’s EIA report for the week ending June 29 are rather wide ranging. The Desk’s Early View natural gas storage survey showed 12 respondents on average expecting a 72.8 Bcf build this week, with a range of 57 Bcf to 82 Bcf. Last year, EIA recorded a 60 Bcf build, and the five-year average is a 70 Bcf injection. Other estimates appear to be clustering around a build in the upper 70s Bcf range.

“If the demand growth witnessed earlier this injection season returns, end-of-October inventory levels could be as low as 3,400 Bcf, the Houston-based company said.

Most pricing points across the country posted similar losses of up to 11 cents at the front of the curve, although a handful of points ended the week firmly in the black. Not surprisingly, SoCal City-gate August forward prices shot up 24 cents during that time to reach $4.41, easily surpassing the next-highest August price by well more than $1, according to Forward Look.

While August posted the sharpest hike, the rest of the SoCal Citygate curve was strong as well.

The stout gains come as Southern California is expected to see far above-average temperatures for the weekend, with highs predicted by AccuWeather to reach the low 100s in Los Angeles on Friday and Saturday before retreating to the low 90s by Sunday, which is still about 10 degrees above normal. The unusually hot conditions are expected to stick around until the middle of next week before returning to more seasonable levels.

“The same high pressure area that brought record-challenging heat to the eastern two-thirds of the nation from late June through the Fourth of July will gradually re-position itself over the Southwest by week’s end and into the upcoming weekend,” said AccuWeather meteorologist Kyle Elliott.

A few desert locations could reach 120 degrees on one or both days, and high temperatures will challenge records from Los Angeles to San Diego as well as in Las Vegas and Phoenix.

Genscape Inc. showed demand reaching 6.23 Bcf/d on Friday but then sliding to 5.57 Bcf/d for Saturday. The July 9-13 period is projected to see demand average around 6.22 Bcf/d.

Southern California Gas Co. (SoCalGas) and affiliate San Diego Gas & Electric warned shippers in a notice Tuesday that the utilities were bracing for “warmer temperatures throughout the service territories starting Thursday” and continuing through Sunday.

Ongoing maintenance issues on the SoCalGas system have limited import capacity to 2.6 Bcf/d, a situation compounded by the regulatory restrictions on the Aliso Canyon storage cavern following the October 2015 leak at the facility that have made it a resource of last resort.

“The problem arises when the temperatures drive heating or cooling load above the available capacity rating of the system,” Energy GPS said earlier this week. “This past spring has been rather mild with only a handful of days in the Los Angeles Basin reaching over 90 degrees. This is about to change.”

The upcoming triple-digit highs will push SoCalGas demand “far above pipeline supply,” the firm said. “They will have to dip into their storage inventory in order to maintain reliable pressures on the system.”

Elsewhere in the United States, some other western points posted modest gains for the week given the looming heat. Malin August forward prices were up 1 penny from June 27 to July 3 to reach $2.417, while September stayed flat at $2.378 and the balance of summer (September-October) slipped 2 cents to $2.31, according to Forward Look.