Athlon Energy Inc. is buying 23,500 net acres in Texas counties Martin, Upton, Andrews and Glasscock for $873 million in cash, giving the Fort Worth, TX-based company greater scale in the core of the Wolfcamp Shale. 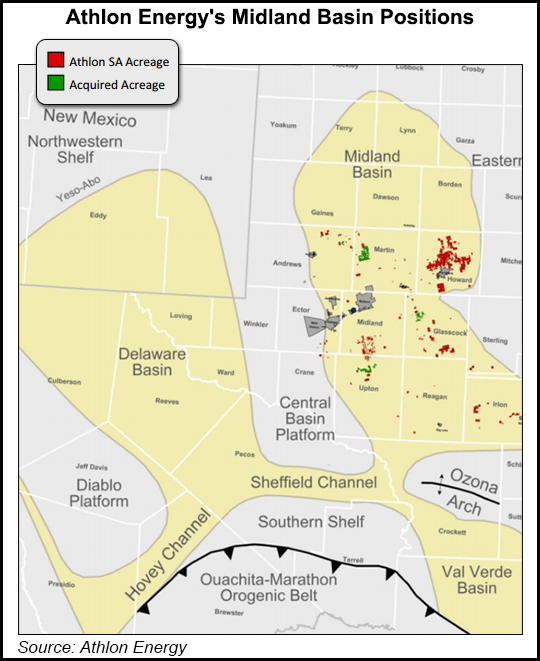 The acquisition represents individual deals with five undisclosed sellers. The properties are 100% operated and are concentrated primarily on the western side of the northern Midland Basin, near Athlon’s current operating areas, the company said in announcing the acquisition late Tuesday.

The news lifted Athlon shares (ATHL) by more than 13% on Wednesday. The stock closed the day at $37.91/share on the New York Stock Exchange after reaching $38.94 intraday, a new 52-week high. Trading was heavy.

The acreage comes with a 97% working interest and 73% net revenue interest. Current production is about 4,800 boe/d, which is 67% oil. The company estimates net proved reserves to be 31 million boe, with 39% proved developed. Total net reserve potential is estimated by Athlon at more than 250 million boe.

Less than 20% of the estimated vertical locations on the target properties have been drilled to date, and Athlon said vertical development would represent “years of low-risk growth potential,” with 840 gross identified vertical drilling locations.

Athlon management said it also believes the assets are “highly prospective” for horizontal development, with 425 identified gross potential locations in six zones including the Wolfcamp A and B (150 locations), Lower and Middle Spraberry (150 locations), Wolfcamp D (85 locations), and Clearfork (40 locations) horizons.

During a conference call to discuss the acquisition, Reeves told financial analysts the purchases are “an extension of the strategy that we’ve been talking about since we’ve been out in the public market…For us, it’s an important piece of understanding Athlon…This acquisition is really what we do; we buy high-quality assets.”

The “blocky” and contiguous acreage being acquired is ideal for drilling long laterals, 7,500-8,000 feet. Operatorship and high working interest give Athlon the opportunity to apply what it’s already learned in the basin from an operational and technical standpoint, Reeves said. “I’m not sure this deal could get any stronger on a standalone basis. If we were looking to start a new company, similar to what we did back in 2010…we would look for a set of assets like this…”

A major plus is the production being acquired and its associated cash flow, Reeves said, adding that it would only take a modest capital commitment to hold the acreage with vertical drilling, about $40 million per year.

“You’ve got this huge resource potential out here with high rates of return on the vertical side and the horizontal side. You’ve just got years of growth and ability to work on these assets, so we could not be more excited to get these assets in the portfolio and get the team starting to work on them.”

Before the conference call, a couple of analysts following the company expressed enthusiasm for the deal in separate notes Wednesday morning.

“We see this as a very attractive package, considering a large portion is located in Martin County, where typical 7,500-foot lateral wells are projected to produce 800,000 boe [estimated ultimate recoveries],” said Topeka Capital Markets analyst Gabriele Sorbara. “Based on our calculation, ATHL is paying $28.16 per proved boe, $181,875 per flowing boe of production and $20,809 per acre.”

Wells Fargo Securities analyst David Tameron wrote that upon first glance, the price seems steep, but he added that the acreage “is right around a lot of industry activity, so competition for acreage was likely high.”

In Athlon, investors get “a relatively low-risk inventory of potential vertical wells, horizontal upside potential and a viable production growth profile,” Tameron wrote. “Given this, we believe ATHL shares should outperform peers over the next 12-18 months.”

Athlon said it would take one vertical rig to drill 20 wells per year in order to hold the acreage, which it said should be accomplished by reallocating its existing fleet of eight vertical rigs. The company is running one horizontal rig and plans to add a second at the end of April, and add a third at the closing of the latest acquisitions. Athlon said it now expects to accelerate its program to four operated horizontal rigs by early fourth quarter.

During the conference call, Reeves said he has had to miss participating at a couple of recent industry conferences as the company was putting the multiple deals together. This might have caused some speculation in the market about the company’s activities in Howard County, TX, and whether everything was going according to plan with its first wells there. It is, said Reeves.

The transactions are expected to close by June and be immediately accretive to cash flow per share and earnings per share, as well as net asset value. The company plans to fund the acquisitions with a combination of borrowings under its existing revolving credit facility, and equity and debt capital markets transactions.

Athlon said it expects its revolving credit facility to increase from $525 million to $1 billion as a result of additional proved reserves added through its drilling program and 2014 acquisitions.