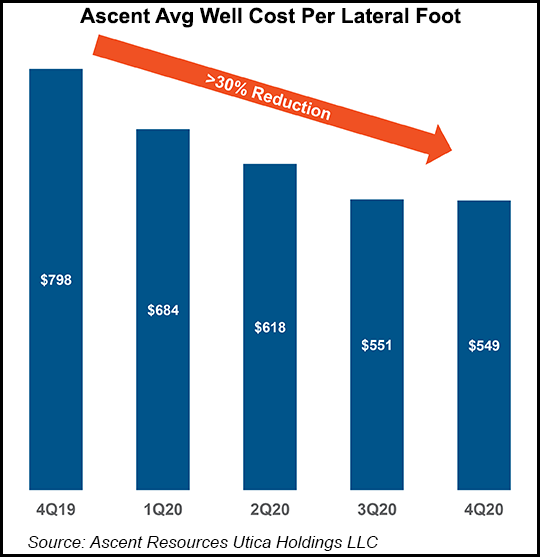 The Ohio pure-play has issued 2021 capital guidance at a range of $550-600 million and intends to maintain production at 2 Bcfe/d. Ascent spent $657 million last year and produced just over 1.9 Bcfe/d after curtailing 40 Bcfe of volumes, as other operators did when commodity prices were hit by the Covid-19 outbreak.

The company intends to run up to four operated rigs this year on its acreage in the southeast part of the state. It plans to spud up to 65 wells and turn up to 70 to sales.

Ascent, which is privately owned, is forecasting up to $150 million of free cash flow (FCF) this year based on current market conditions. The company reported $114 million of FCF for full-year 2020.

“Ascent has successfully delivered on its operational and financial objectives in 2020,” CEO Jeff Fisher said. He added that the company was able to navigate through the challenging year by “staying disciplined, leveraging our operational capabilities and improving our balance sheet.”

Ascent is also the nation’s eighth largest natural gas producer. The company holds 340,000 net acres in Ohio that came together after the late Aubrey McClendon was ousted from the helm of former Utica Shale heavyweight, Chesapeake Energy Corp., and founded Ascent’s predecessor before it was spun-off and became independent.

Fourth quarter net income was $169 million, compared to net income of $65.3 million in the year-ago period. The company reported a net loss of $590 million for the full year, including a $100 million impairment on unproved oil and gas properties. That’s compared with 2019 net income of $466 million.