Global oil demand has begun to recover from the impacts of a still raging pandemic, but Lower 48 upstream activity is unlikely to return to pre-Covid levels anytime soon, if at all, according to ConocoPhillips CEO Ryan Lance. 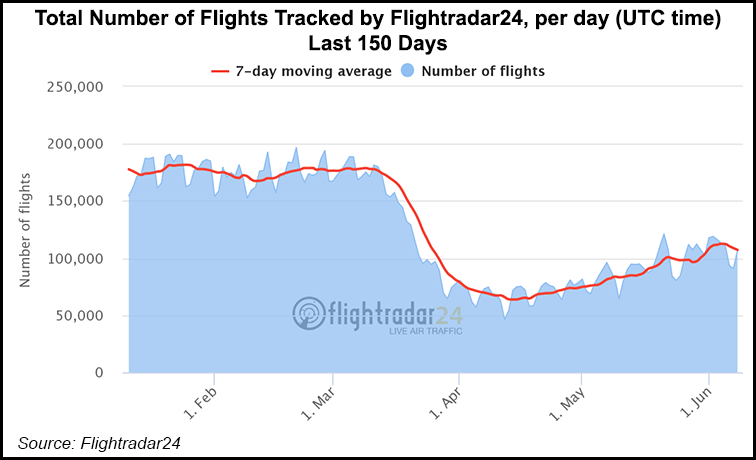 “If I were a betting man, today I would say it would be pretty difficult for us to return to 13 million b/d,” Lance said in an interview with IHS Markit Vice Chairman Daniel Yergin. Lance predicted the Lower 48 would get above 10 million b/d again, possibly above 11 million, “maybe encroaching on 12 as we go through. A lot depends on the shape of this recovery.”

The U.S. coronavirus death toll surpassed 110,000 this week, with Texas reporting a record 1,935 hospitalizations from the illness on Monday, indicating that the country is nowhere near out of the woods pandemic-wise, even as businesses reopen and stay-at-home measures are lifted.

ConocoPhillips, the world’s largest independent oil and gas company, has about one-third of its production, or 400,000 b/d, shut-in from the Covid-driven collapse in prices and demand, Lance said.

“But we see some strengthening in the market so we are in the process of thinking about under what circumstances should we start coming back into the market and then start selling our product.”

Last Saturday’s agreement by the Organization of the Petroleum Exporting Countries and its allies (OPEC-plus) to extend supply cuts through the end of July has been bullish for U.S. oil prices, which had already been steadily recovering since April, when they briefly plunged into negative territory.

“I would say we’re probably thinking of slowly coming back into the market over the next few months and reducing the amount we’ve got curtailed because we’re seeing some strengthening in the price,” Lance said.

As the ConocoPhillips chief has done before, Lance stressed the importance of consolidation and improving shareholder returns in the Lower 48 segment in order to coax back investors who have soured on the capital-intensive shale industry, which for years pursued a growth-at-all-cost strategy.

“Shale is not broke; shale is not gone; shale will come back,” Lance said. “But I do think it comes back slower because there’s going to be pressure on companies to confine their capital program, maybe not grow dramatically as they were before, because I don’t think the access to capital in the investor community, at least in the public side of the business, is going to be as robust as it was over the last decade.”

As part of its new value proposition, ConocoPhillips has enacted a policy of returning at least 30% of available cash to shareholders.

The Energy Information Administration (EIA) said Tuesday it expects global demand for petroleum and liquid fuels to rise to 94.9 million b/d in the third quarter from an expected 83.8 million b/d in the second quarter as stay-at-home orders are eased and travel resumes.

In addition, analysts said, data from the Transportation and Safety Administration showed the seven-day average of passengers moving through checkpoints up 18% w/w to 362,000. The checkpoint figure was down by a staggering 85% y/y, versus 87% the previous week.

The TPH team noted that flights have been picking up faster during the week than on the weekend, suggesting that work travel is recovering at a faster rate than leisure travel.

The uptick in flights “gives us optimism that we’ve seen the bottom of the cycle, and we’ll continue to look at these data points weekly to gauge jet demand recovery,” TPH analysts said.

“Though states began to reopen in May, there’s still an uphill climb for U.S. VMT growth,” the TPH team said, highlighting that U.S. vehicle sales were down 30% y/y in May, versus 46% in April.

TPH analysts anticipate some improvement in VMT in May, “though sharp y/y declines are still on the horizon.”

Because of the pandemic’s impact on global oil demand, Moody’s Investors Service said Tuesday it now expects Brent crude to average $35/bbl this year and $45in 2021, or $8 below the rating agency’s March forecast.

“The deeper global economic recession that we now expect in 2020 in all major advanced economies and the drastic reduction in travel in particular have reduced demand for oil products beyond our previous assumptions,” said Moody’s senior analyst Alexander Perjessy.

Perjessy said the lower-for-longer environment will weaken the fiscal and external positions of oil exporting countries rated by Moody’s, with Oman, Iraq, Angola and the Democratic Republic of the Congo especially vulnerable.