U.S. oil producers overall have been reluctant to ramp up output even as crude prices climb and demand rebounds. They have focused on generating cash flow and exercised patience as the economy recovers from the pandemic. 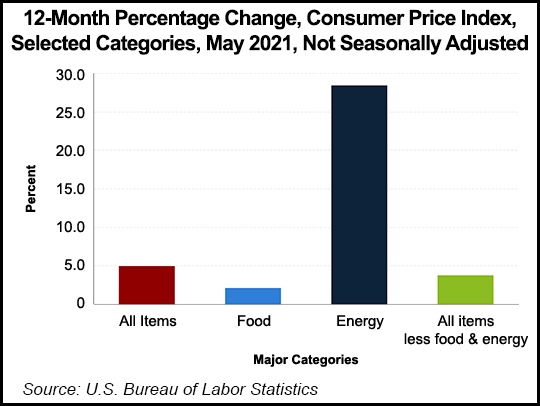 But shortages of supplies needed for drilling and resulting inflation amid coronavirus fallout could extend the trend and keep production in check into 2022. Citigroup Inc. analysts said in a June report that inflation could eclipse 12% in the North American oil and gas sector by the end of 2021, driven up by rising costs for everything from steel to cement.

Oil prices recovered from last year’s pandemic-induced slump and have climbed about 40% this year, enticing global producers to ramp back up in recent months. But the Citigroup team said oilfield services companies in the United States have had to pay lofty prices for supplies and are struggling to pass on those increases to enough of the producers they serve to book profits. Steel prices for drill pipes used in new wells, most notably, could surge 50% in 2021, Citigroup said.

If the inflationary pressure persists, domestic production could stagnate through the year. This could keep production of associated natural gas – a byproduct of oil production – in check as well, affecting prices just as natural gas demand is mounting with summer heat baking the Lower 48.

“This whole supply chain disruption that’s affected nearly every industry could drag on – maybe well into next year – and it really is a wildcard,” said trader Mike Matousek of U.S. Global Investors. He noted that virus outbreaks – and supply disruptions — continue in parts of Asia.

“And inflation in one area of the economy can bleed into another,” Matousek added. “A rapid economic rebound, while good in many ways, could potentially lead to runaway inflation, regardless of the pandemic, furthering this cycle of supply shortages and sky-high prices.”

The U.S. Consumer Price Index shot up 5% in May from a year earlier, marking the fastest rate in more than 12 years, the Bureau of Labor Statistics said Thursday. Part of the jump reflects temporarily low prices in spring 2020. But increases are so severe in the energy sector that economists say supply chain interruptions are clearly affecting production costs, contributing to flat output and resulting in higher costs for gasoline and other fuels derived from oil.

Energy prices in May soared 28.5% year/year.

Excluding food and energy, prices in May rose 3.8% from a year prior. For reference, Federal Reserve policymakers target 2% inflation in a healthy economic growth period.

Labor costs are also rising, including in energy, as the sector competes with other industries for engineers and other talent during a rapidly recovering job market, Brown said. U.S. payrolls surged by 559,000 jobs in May alone, according to federal estimates.

The Fed has kept interest rates low – vowing to do so through 2022 to support economic activity — despite the rising prices. Fed policymakers have said they believe pandemic-related disruptions will get sorted out this year and conditions will normalize.

Bankers, however, increasingly argue that the Fed may need to raise rates in the face of intensifying inflation. Higher rates discourage borrowing and, by extension, spending to help curb price increases.

JPMorgan Chase CEO Jamie Dimon, in testimony before Congress in late May, said the U.S. economy is “not boiling yet.” But the head of the nation’s largest bank said red flags abound and he hopes inflation “won’t be out of whack” and the Fed “will be able to tamp it down.”

All of this helps to explain why U.S. producers reiterated their caution when speaking with investors in recent weeks. Houston-based Marathon Oil Corp., for example, said in May it would hold firm to its $1 billion capital expenditures budget in 2021 even if oil prices keep rising.

“We will simply generate more free cash flow and further solidify our standing as an industry leader when it comes to capital discipline,” CEO Lee Tillman said during a call to discuss first quarter earnings, echoing several of his peers.

Assuming a $60/bbl West Texas Intermediate oil price, the independent expects to generate $1.6 billion of free cash flow this year, he said. Marathon has a mandate to return at least 30% of cash flow from operations to investors and is on track to return more than 40% in 2021.

All of that noted, producer activity has climbed back from the depths of 2020. The total U.S. rig count stood at 456 as of June 4, according to data from Baker Hughes Co. (BKR). That was up from 284 rigs running in the comparable week a year earlier, when virus outbreaks and economic lockdowns were prevalent.

Globally, however, producers are shifting gears. Projecting strong demand this summer and through the fall, the Organization of the Petroleum Exporting Countries and its oil-producing allies, aka OPEC-plus, are currently executing on a three-month plan to increase production through July.

The cartel said it is adding more than 2 million b/d in that span. The group expects global oil demand to increase by about 6 million b/d in the second half of this year, necessitating the output increase.

Meanwhile, U.S. commercial crude inventories in the June 4 week — excluding those in the Strategic Petroleum Reserve — decreased by 5.2 million bbl from the previous week. At 474.0 million bbl, inventories were 4% below the five year-average, according to EIA, reflecting the light production and rising demand.