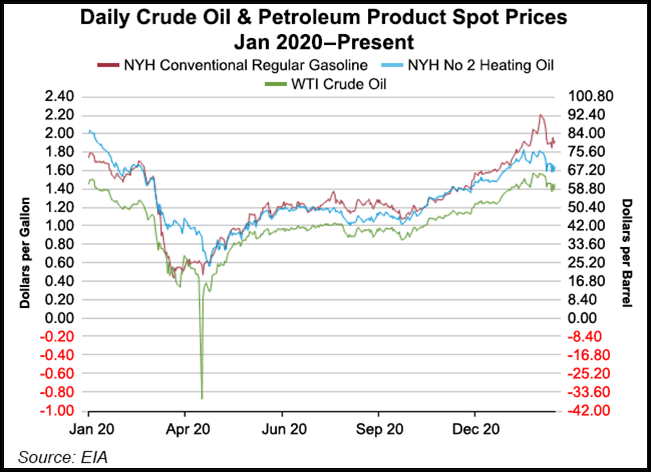 In its Weekly Petroleum Status Report, EIA said crude inventories — excluding those in the Strategic Petroleum Reserve — fell by 900,000 bbl from the previous week. Still, at 501.8 million bbl, U.S. stocks were 6% above the five-year average.

The agency said demand increased 9% week/week as utilization by Gulf Coast refiners ramped up following a sluggish recovery from the Artic freeze that derailed the Texas energy sector in February. Demand was up more than 13% from a year earlier.

The ClearView analysts noted that year/year comparisons for the latest week were not meaningful because of “extreme movements in data” last year as the effects of the pandemic took hold. That noted, they said demand last week was up 1% from the comparable week in 2019, though travel fuels derived from oil were lower. Jet fuel consumption last week was down 28% from the 2019 period and gasoline demand was off 3%, the analysts said, reflecting lingering impacts of the pandemic.

Meanwhile, extended production cuts by the Organization of the Petroleum Exporting Countries and its allies, aka OPEC-plus, remain on the table for May.

After cutting production by 1.0 million b/d in both February and March, OPEC leader Saudi Arabia extended the reduction through April, citing uncertainty about the pandemic and the gradual pace of demand recovery. Most other members of the cartel agreed to keep output flat during that period.

The cartel meets Thursday to determine production plans for May and perhaps beyond. Many analysts are anticipating that policymakers will keep a lid on production for another month, given new lockdowns across Europe to contain a spring wave of virus outbreaks.

“Our expectation, along with consensus, has been for a rollover” of the OPEC-plus cuts, analysts at Tudor, Pickering, Holt & Co. said Wednesday.

Meanwhile, ahead of the broader policy meeting, a panel of OPEC-plus technical experts this week revised down their 2021 global oil demand estimate. They now expect demand to increase by 5.6 million b/d this year, down from 5.9 million previously, Bloomberg reported, citing OPEC-plus delegates.

In a statement, OPEC said its secretary general, HE Mohammad Sanusi Barkindo, emphasized during the technical meeting a “need to remain very cautious and attentive to changing market conditions.” The cartel said he noted “reminders of the ongoing uncertainties and fragility” caused by the pandemic.