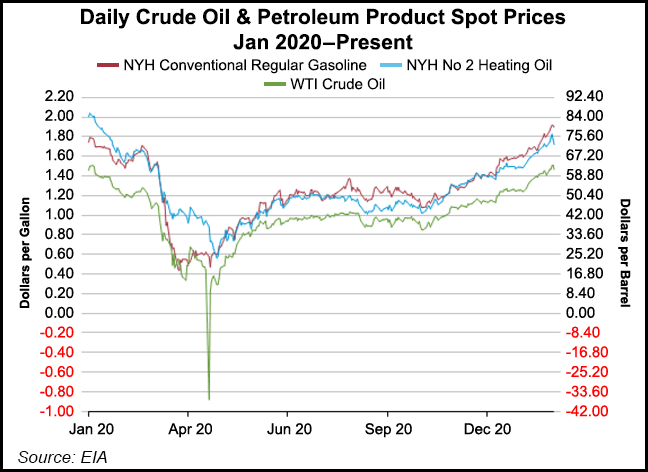 In its Weekly Petroleum Status Report (WPSR), EIA said overall demand in the week ended Feb. 26 ticked up 0.4% week/week but was off 12% when compared with a year earlier. The year/year drop was driven in part by a 17% decline in propane and propylene consumption as temperatures warmed during the covered week as well as an 11% dip in gasoline demand.

The biggest driver, however, was the 25% year/year decline in jet fuel consumption, EIA said. With travel light amid the ongoing coronavirus pandemic, fuels used for air travel have for more months proven a substantial drag on petroleum demand.

He noted, however, the global rollout of virus vaccines and the potential for a rebound in travel this year. “I think the recovery is underway,” Wirth said. “That means demand for our products.”

U.S. crude production in the latest covered week averaged 10.0 million b/d, an increase of 300,000 b/d from the prior week, though production was 3.1 million b/d lower year/year, EIA said.

Additionally, in the wake of the deep freeze that devastated Texas and its energy sector in mid-February, Gulf Coast refinery utilization rates remained depressed, down more than 40% week/week, according to the WSPR. Overall, refineries operated at 56% of their operable capacity during the covered week, EIA said.

This contributed to the 21.6 million bbl increase in U.S. commercial crude oil inventories. At 484.6 million bbl, excluding those in the Strategic Petroleum Reserve, crude inventories were 3% above the five-year average, EIA said.

The snapshot of U.S. inventories came one day ahead of a strategy meeting among members of the Organization of the Petroleum Exporting Countries (OPEC) and its allies, aka OPEC-plus.

Oil prices have rallied this year in large part because of OPEC production curtailments aimed at leveling supply and demand. OPEC leader Saudi Arabia said it would cut production by 1.0 million b/d in both February and March. Most other members of the cartel agreed to keep output flat during that span.

However, markets are anticipating that when OPEC-plus members meet Thursday, they will agree to increase production, potentially as soon as April. Rystad Energy analyst Bjornar Tonhaugen said an increase is likely to be modest, however, so as not to rattle markets and derail the price run-up to date in 2020. Brent crude hovered above $64/bbl in intraday trading Wednesday, up more than 25% from the start of the year.

“Our supply-demand balances show that the alliance could in theory increase its production month-on-month in April 2021 by as much as 1.3 million b/d from our expected March 2021 levels, and still keep the global crude market balanced,” Tonhaugen said.

He added that the cartel enters the meeting with a self-imposed production increase limit of 500,000 b/d on a monthly basis, though that does not include a return of the Saudi Arabian cuts. All eyes, he said, will be on guidance from Saudi Arabia about “when and how fast it plans to return its extra cuts to the market.”