Arizona regulators said Tuesday in an annual conference with major suppliers and distributors in Phoenix that the state has robust natural gas supplies for this winter, which is expected to be warmer and wetter than normal. 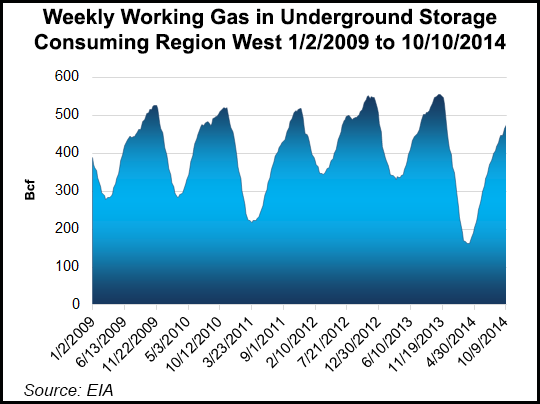 Transwestern cited its new compressor station, New River, which permits spot flows of 1 Bcf/d to a number of gas-fired generation plants in the state, along with noting the Phoenix lateral will provide 260 MMcf/d capacity in the winter months, as well as 116 MMcf/d on its Mainline West in the next two years before bumping up to 183 MMcf/d capacity in 2017.

In the event of another historically cold winter across much of the nation, El Paso’s Kevin Johnson, director of the western region gas control, said there is the “potential for coordinated emergency operational assistance among TransColorado Gas Transmission, Colorado Interstate Gas, Natural Gas Pipeline, and El Paso.”

Southern Trails was completely hydrostatically tested in 2001 before it was converted from an oil-carrying pipeline to one carrying natural gas (see Daily GPI, May 30, 2002).

“The utilities outlined their plans for meeting winter demand and Arizonans can rest assured that supplies are robust,” said Arizona Corporation Commission (ACC) Chairman Bob Stump. “A warmer-than-normal winter has been forecast, and Arizona’s utilities appear prepared to meet [everyone’s] energy demands during our colder months.”

Regulators were briefed on the companies’ emergency plans to deal with any potential service outages and how they are working to assure adequate supplies and staffing, an ACC spokesperson said. “Commissioners also questioned whether there were adequate systems in place to notify customers and field inquiries, especially those customers with health or safety needs.”

In addition to Southwest Gas, Transwestern, El Paso and Questar, UNS Gas and Alliant Gas also made reports to the five-member ACC.