The Navajo Nation Council on Tuesday approved an agreement to continue operating the massive Navajo Generating Stations (NGS) in Arizona through 2019, after which the plant would be retired, another closure related to cheap natural gas supply. 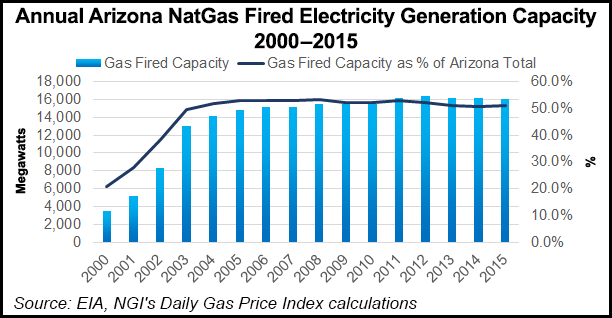 Absent the agreement, as decided earlier by its four utility owners, one of the largest coal-fired generation facilities in the West would have been shuttered at the end of this year.

“The owners made the difficult decision in February to end their participation in NGS when the current lease term ends in 2019 after it became clear that current and forecasted low natural gas prices had made coal generation there uneconomical,” said a spokesperson for Phoenix-based Salt River Project (SRP), representing the four owners.

SRP hammered out a replacement lease with a Navajo Nation task force, after the parties agreed earlier this year to keep operating the facility on the Navajo reservation at Page, AZ, until December 2019.

“Some work remains to address certain language included in amendments approved by the Navajo Council,” said the spokesperson. “NGS owners are hopeful this can be resolved by the Navajo by Saturday, and that the plant will continue operating until the end of the current lease on Dec. 23, 2019.”

The NGS plant’s closure points to the impact that cheap and abundant U.S. natural gas supplies have had on the once-dominant coal-fired electricity sector. Other NGS utility owners include Arizona Public Service Co., NV Energy and Tucson Electric Power.

The replacement lease sets guidelines for the NGS retirement process and includes $110 million in lease payments, minimum fuel purchase revenues assurances for the Navajo Nation of $39 million in 2018 and 2019, and transmission from the NGS station.

NGS owners also agreed that the Navajo could retain additional assets associated with NGS, including commercial buildings, a railroad and a lake pump system. More that $18 million in savings is expected to be generated by not decommissioning those assets.

A non-utility participant in NGS, the U.S. Bureau of Reclamation, indicated earlier that it would prefer to explore ways to operate the coal-fired plant economically after 2019. Ultimately, it was decided that wasn’t a realistic option.

In addition to the Navajo lease, several rights-of-way for the 2,250 MW power plant from federal agencies were issued for both the plant and additional facilities. These involve separate agreements. The bureaus of Reclamation and Indian Affairs, as well as other federal agencies, would have to approve or authorize the extension of NGS operations and all associated facilities beyond 2019.