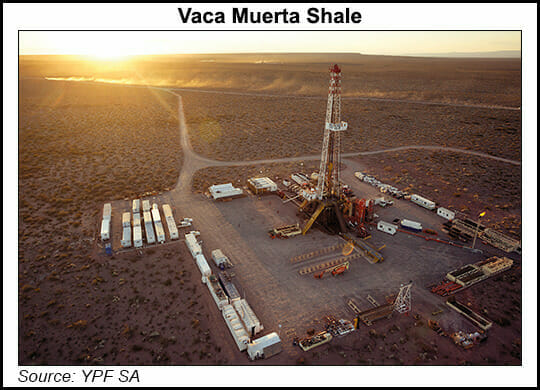 YPF “has come out to announce its big effort to all Argentines, an investment that will translate into an important increase in oil and gas production that is going to boost growth in our country,” Chairman Pablo González said Friday.

The company is looking to increase the province’s crude production by 56% and unconventional natural gas production by 70% this year, the executive said.

Capital expenditure (capex) fell last year by 56%, hitting $1.55 billion. At the onset of the coronavirus last March, activity ground to a complete halt, with zero active rigs reported in the country in April. Activity picked up gradually through the year, and by year-end YPF had more than 80 rigs in operation, including drilling, workover and pulling towers.

In December the national government handed out 23 contracts for 67.42 million cubic meters/day (MMm3/d), or 2.38 Bcf/d, as part of Plan Gas 4. As part of the plan, winning companies would be able to sell natural gas to the market at a combined weighted average of $3.54/MMBtu through 2024. The aim of the plan is to bolster production so that distribution and power demand can be met through domestic production.