In a move that only recently seemed unthinkable, Argentina has started sending natural gas to various points in Chile for residential, electric power and industrial uses. 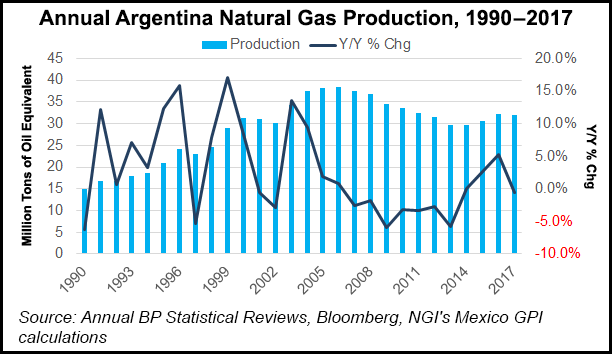 Natural gas production is starting to take off in Argentina. It grew 7% annually in October to reach 132 million cubic meters/day (MMcm/d), or 4.66 Bcf/d. Production of shale gas alone rose by 243% to hit 25 MMcm/d, or 883 MMcf/d, according to Argentina’s energy secretariat.

The majority comes from the Vaca Muerta oil and gas deposit in Argentina’s NeuquÃ©n province, one of the largest unconventional plays in the world. With some suggesting an unconventional boom along the lines of what has occurred in North America, Chile has become an obvious choice as a primary market.

But there is still a long way to go before volumes become significant.

Between 1997 and 2004, the neighbors built cross-border pipelines and Chile developed close to 3 GW of gas-fired capacity based on the availability of cheap Argentine gas. At the time, gas prices from Argentina were in the order of $1.50-2.00/MMBtu, according to Chilean energy consultancy Systep.

However, a massive economic crisis and a deterioration in the country’s energy sector saw Argentina halt natural gas exports by 2007, and Chile’s gas-fired power plants and its energy system in general were left in a perilous position.

Chile, which must import virtually all of its hydrocarbons, subsequently built two liquefied natural gas (LNG) import terminals — GNL Quintero on the coast near Santiago, and GNL Mejillones in the mining-heavy north. A third project called Penco is planned for ConcepciÃ³n south of Santiago, but has seen numerous permitting setbacks.

One of the few natural gas power plants to be built in Chile after the cessation of imports from Argentina was the 550 MW combined cycle Kelar unit in northern Mejillones, owned and operated by the local subsidiary of Australian miner BHP Billiton. Spain’s Natural Gas Fenosa supplies the plant LNG from its global portfolio, including from the Cheniere Energy Inc. Sabine Pass LNG facility in Louisiana, at a cost of about $10/MMBtu, according to Systep.

LNG might now for the first time face competition in Chile. On Oct. 30, the first molecule of Argentine gas for electric power generation in over a decade was sent across the border via the GasAndes pipeline to local power generator ColbÃºn.

Earlier this month, the Gasoducto del PacÃ­fico SA pipeline was reopened after being shut in 2008. Gas is flowing from Vaca Muerta, including from ExxonMobil Corp., to LDC Innergy in Chile’s central-southern BiobÃ­o region.

There are seven pipelines connecting the two countries: GasAtacama and NorAndino in the north; GasAndes in the Santiago Metropolitan region; the aforementioned del PacÃ­fico pipeline; and three lines in southern Magallanes.

For now, the contracts are seasonal and interruptible. The del PacÃ­fico contracts run through May 1. The ColbÃºn contract runs through the end of April. Natural gas demand peaks in Argentina during the Southern Cone winter, and in recent years the country has had to depend heavily on LNG imports to meet demand.

However, the Argentine government is bullish on its natural gas, with plans to revert these flows and start sending out LNG via a floating vessel provided by Belgian shipping company Exmar as early as next year.

“These achievements a few years ago would have seemed impossible,” Argentine Energy Secretary Javier Iguacel wrote recently on Twitter. “With all the potential in Vaca Muerta, we can supply ourselves and export for a hundred years.”

Iguacel thinks Argentina can double its natural gas output by 2023.

The Chilean energy ministry says there are at least eight firms that have applied to purchase gas from Argentina.

Meanwhile, Chile has officially begun a process to gradually shut down all of its coal-fired plants. Coal currently accounts for 40% of its power production. With renewable energy construction booming, and hydrology highly variable from year to year, gas-fired power generation could become the most cost effective baseload option in Chile.

There remains a lot of mistrust between the countries based on the energy crisis of the recent past, but for now there is moderate optimism on both sides of the Andes.