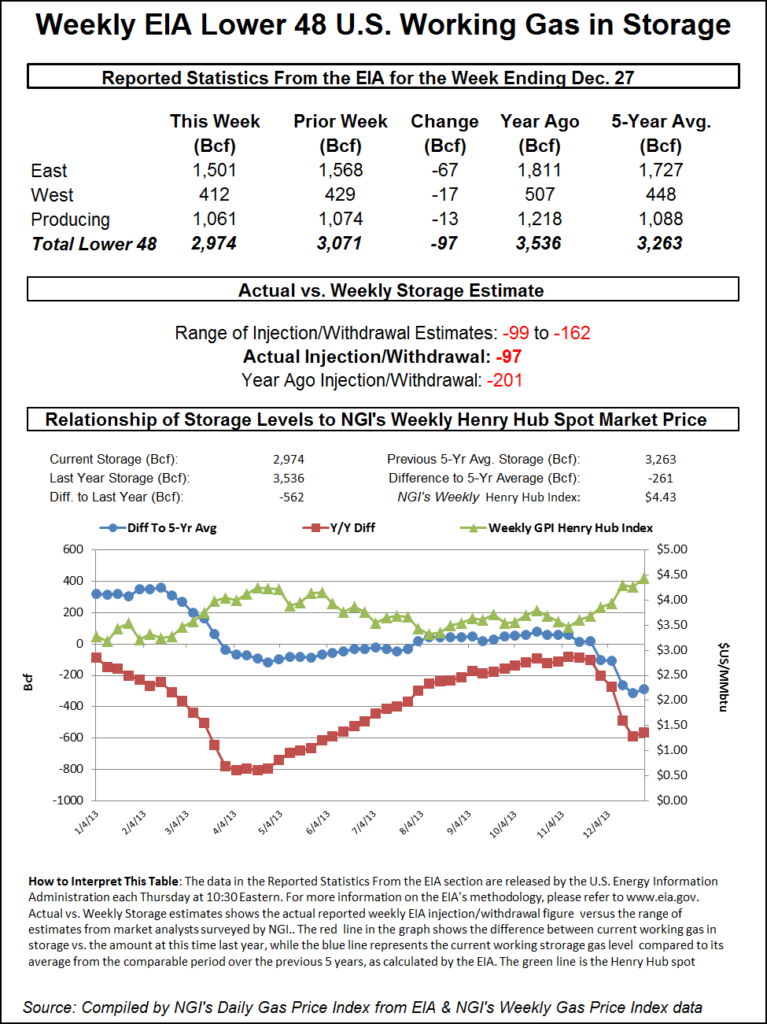 Titanic multi-dollar gains in the Midwest contrasted with big-dollar losses along the Eastern Seaboard. More moderate price swings were seen in the Gulf, California and the Midcontinent. The Energy Information Administration reported a withdrawal of just 97 Bcf from storage, well short of expectations about 30 Bcf higher. Futures prices fell initially but managed to recover with February easing 1.7 cents on the day to $4.304 and March dropping 1.4 cents to $4.282.

Traders trying to secure supply for the weekend and Monday had to deal with forecasts calling for a one-two punch of snow followed by bone-rattling cold throughout the middle of the country. AccuWeather.com meteorologist Courtney Spamer said, “Yet another snowstorm will slam into the Midwest by the end of the weekend and will be followed by brutally cold air early next week. As bitterly cold air charges in, a flash freeze and blizzard conditions could develop in some areas. A cold front will approach the Great Lakes late Saturday and will set the stage for cold and snow around Chicago, Detroit and St. Louis on Sunday.”

It doesn’t stop there. “A storm forming along the front in the Mississippi Valley late on Sunday will bring another snowstorm to the Great Lakes, part of the Northeast and neighboring Ontario,” Spamer said “The storm will also bring snow and slippery travel to much of the Ohio and Tennessee valleys. The heaviest snow is forecast to reach from St. Louis to Indianapolis, Detroit, Cleveland, Buffalo, NY, Erie, PA, and London, Ontario, where a half a foot or more of snow could fall.”

AccuWeather.com meteorologist Dale Mohler added, “Whiteout conditions are possible in these areas with strong winds, plunging temperatures and heavy snowfall rates. The worst conditions are likely in New York state, just south of Buffalo, and in the Tug Hill region, south of Watertown. Major interstate highways including I-79, I-80, I-81, I-90 and Route 219 could close down for a time due to the intense conditions Monday into Tuesday.”

According to Spamer, “Temperatures in Chicago are not expected to exceed zero degrees on Monday with Detroit experiencing afternoon highs just above zero Monday and Tuesday. The last time Chicago was this cold was during early February of 1996, where temperatures remained below zero around the clock for a couple of days.”

A Midwest utility buyer said that extreme conditions would be in place late Sunday and Monday. “We’ll be running 200,000 Dth [Friday], and we just hope Northern Natural Gas doesn’t call a ‘critical notice.’ They are calling for temperatures Monday morning of -15. We just hope we can get all our gas out of storage and the purchases we made on the spot market show up.”

The buyer also said the company’s liquefied natural gas capability might come into play. “It doesn’t take that much to get that going. They can just turn a switch,” he said.

In a critical notice issued Friday afternoon Northern Natural said, “there is a possibility Northern may need to call a Critical Day if the pipeline system experiences low linepack or other conditions that threaten the integrity of Northern’s pipeline system. Northern will continually evaluate the condition of the system and will make all efforts to call a Critical Day, if necessary, in advance of the gas day. However, if the operational condition of the system changes substantially and quickly, Northern may need to call a Critical Day within the gas day.” Should that happen a shipper that removes gas from the pipeline in excess of scheduled quantities could incur a higher level of penalties.

Sharply different weather and sharply different market conditions prevailed in the East. AccuWeather.com meteorologist Alex Sosnowski said, “Quick surges of frigid and mild air will produce dramatic temperature swings from one day to the next in the East. The temperature swings of 25 to 50 degrees in a matter of hours will make it very hard for some people to adjust and can lead to melting and freezing cycles that cannot only rupture water mains but also cause ice to form following bouts of melting snow.”

How about buying natural gas?

Sosnowski said, “During the cold days, when the wind is blowing, combined with other atmosphere conditions [wind chill], temperatures will be 10 to 30 degrees lower than the actual temperature, [and] air blasting southward from eastern Canada on Friday night will send temperatures down to their lowest levels since January 2009 in many locations from New England to part of the mid-Atlantic.

However, after a cold day on Saturday, temperatures will rebound to above-average levels from the Appalachians to the coastal mid-Atlantic and southern New England.” AccuWeather meteorologists forecast that “temperatures will reach the 40s in Washington, DC, Baltimore, Philadelphia and New York City on Sunday.”

Traders got a chance to factor in both the brutal cold pounding the country as well as storage statistics when the Energy Information Administration released inventory figures for the week ended Dec. 27. Estimates were all over the map. Bentek Energy forecast a draw of 99 Bcf, and a Reuters survey of 20 analysts resulted in an average 126 Bcf reduction with a range of 103-162 Bcf. Tim Evans of Citi Futures Perspective predicted a 139 Bcf pull. Last year 126 Bcf was withdrawn, and the five-year average is for 121 Bcf.

Analysts weren’t ruling out a low surprise. “This week we note that the market is clustered around a -122 to -125ish draw, though the range is wildly wide — ours was -99 to -139 Bcf — and Reuters was even wider at -103 to -162 Bcf,” said John Sodergreen, editor of Energy Metro Desk. Sodergreen tracks the differential among the three categories of analysts he follows (banks, surveys and independents), and when the spread among categories gets beyond 3 Bcf he contends it will result in a “surprise” number. “And given the holiday and all, a surprise shouldn’t really surprise,” he said.

In spite of the weather and hefty storage deficits, observers aren’t optimistic about further price advances. “Although the ability of the market to recover almost half of Tuesday’s price plunge appeared bullish from a technical vantage point, renewed overnight selling suggests a market that will have difficulty piecing together another meaningful advance,” said Jim Ritterbusch of Ritterbusch and Associates in a Friday morning note to clients. “This week’s main focus of attention has been on the shifts in the short-term temperature views. While this week’s exceptional cold trend will be stretched into about the middle of next week, most forecasts are increasingly tilted in favor of some warming patterns by later next week.”

Industry consultant Genscape reported that Appalachia demand has increased to more than 18.0 Bcf/d with the presence of winter storm conditions. Demand increased by 2.5 Bcf/d week-on-week, and the cold first half of the winter resulted in year-on-year increase of 0.9 Bcf/d for November and 2.5 Bcf/d for December. Typical non-winter demand in Appalachia centers around 6 Bcf/d.