Natural gas futures failed to find footing on Wednesday, seesawing between small gains and losses throughout the session before ultimately ticking down amid mild temperatures across the country and a dearth of new price catalysts. 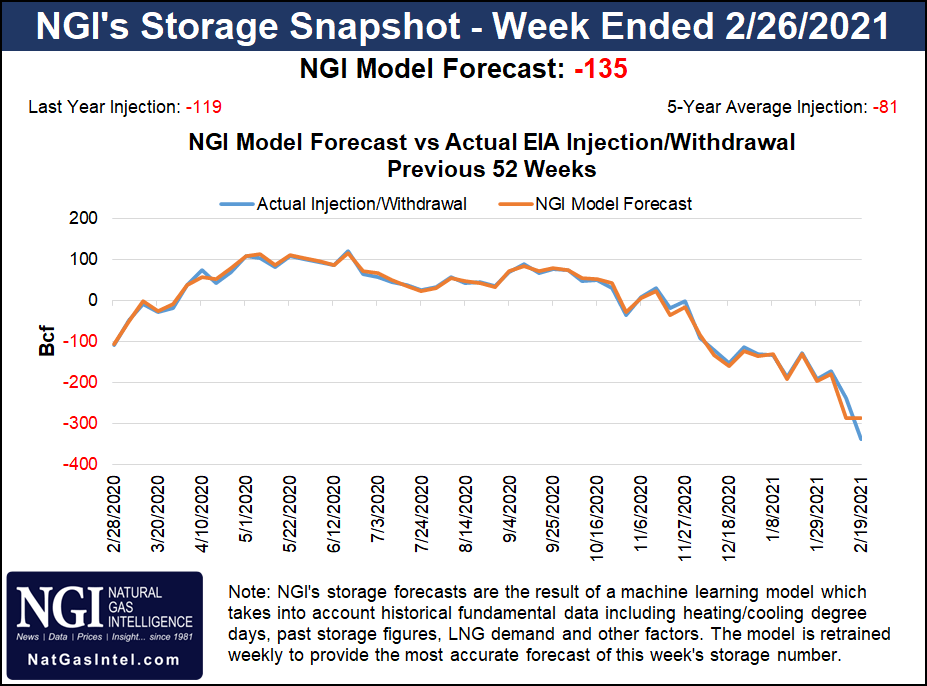 Diminished near-term weather demand also dragged spot gas prices lower across parts of the Lower 48 Wednesday. NGI’s Spot Gas National Avg., however, advanced 33.0 cents to $3.170, thanks to a boost from surging prices in the volatile Northeast.

While overnight forecasts shifted moderately cooler for a second consecutive time, pointing to increased heating degree days for a stretch in mid-March, the overall outlook for the rest of the month focuses on generally pleasant spring conditions and normal, modest demand for the season.

“We feel that models are likely pushing things a bit too far to the cool side around mid-month at this point, though we are fine with some variability mixing into what should average out a warmer than normal, overall, with the best chance of any durable below-normal temperatures being confined to areas out West, where there is less impact for natural gas,” Bespoke Weather Services said.

Liquefied natural gas (LNG) export levels have largely recovered from the shock of the mid-February Texas freeze that threw Gulf Coast energy operations into temporary disarray. LNG feed gas volumes topped 10 Bcf on Wednesday, more than double the low reached the prior month. But volumes remained below the 11 Bcf level at which they hovered earlier this year, leaving the export momentum shy of market moving.

Production also endured a big hit amid the February cold snap, but it has recovered much of the ground lost in recent days. Against that backdrop, traders took profits ahead of Thursday’s weekly storage report from the U.S. Energy Information Administration (EIA).

Thursday’s EIA report “will have some say as well, but once colder momentum comes to a halt in the forecasts, we feel it will become tougher to advance higher from these levels, and a retracement will ensue,” Bespoke said.

Ahead of the EIA print, NGI’s model estimated a 135 Bcf withdrawal for the week ended Feb. 26.

A Bloomberg survey found withdrawal estimates ranging from 134 Bcf to 162 Bcf, with a median 148 Bcf decrease. A Reuters poll found pull estimates spanning from 93 Bcf to 150 Bcf and a median estimate for a 135 Bcf decline in stocks.

A Wall Street Journal poll, meanwhile, landed at an average withdrawal 144 Bcf, with estimates ranging from decreases of 117 Bcf to 162 Bcf.

The estimates compare with a 72 Bcf pull in the same week a year earlier and a five-year average decline of 89 Bcf, according to EIA.

“The natural gas storage comparison versus the five-year average has tightened by a startling 405 Bcf over the past four weeks — from a 244 Bcf surplus to a 161 Bcf deficit — and the deficit may surpass 225 Bcf” after Thursday’s storage report, EBW Analytic Group analysts said.

“Over the next three weeks, however, the trajectory of the storage comparison versus the five-year average may flatten” as temperatures rise and heating demand fades, the EBW analysts said.

Spot gas prices advanced on Wednesday, led higher by a rebound in the Northeast. Prices in the region surged Monday before plunging Tuesday and then climbing back quickly Wednesday.

Prices on average were up more than $2.000 across the Northeast.

Mild temperatures with highs in the 40s to the 70s permeated much of the Lower 48 Wednesday. National Weather Service (NWS) forecasts called for a shot of cooler air, however, with chilly rains and the potential for snow Thursday and Friday in the East.

Looking into early next week, NWS outlooks showed temperatures were expected to rise into the 50s in the Midwest and East and the 80s in the South and parts of the West.

Outside of the Northeast, prices were mixed on Wednesday, with mostly modest gains and losses against the backdrop of generally benign weather.

Wood Mackenzie analysts on Wednesday noted that Kern River Gas Transmission Company had begun a controls upgrade at its Goodsprings Compressor, which is downstream of Las Vegas and close to the California border. This work was scheduled to last through Monday and could limit capacity to 1,410 MMcf/d.

“Flows had dipped in mid-February in conjunction with the Arctic blast and its extreme price spikes, but have been flowing back at normal levels for the last two weeks,” the Wood Mackenzie analysts said. “Since then, the greatest daily flows have been 1,665 MMcf/d, which would put over 250 MMcf/d at risk from this event.”