Montage Resources Corp., which emerged on Thursday after Appalachian pure-plays Eclipse Resources and Blue Ridge Mountain Resources officially combined, is aiming for double-digit production growth in the basin this year with a revamped strategy. 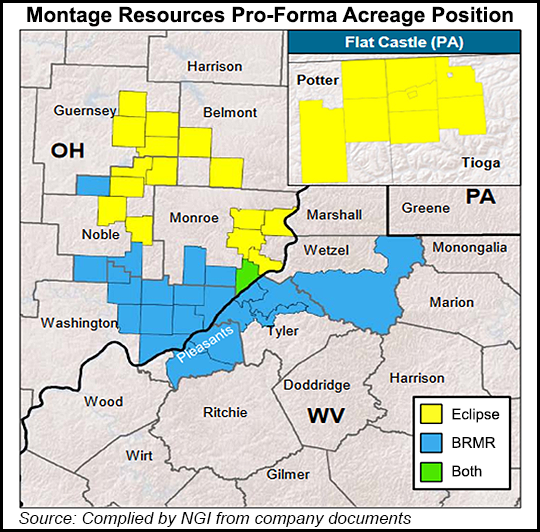 The company said it would spend $375-400 million this year on a two-rig drilling program targeting 55% liquids-rich locations and 45% dry gas locations. More than 90% of the budget has been earmarked for drilling and completion.

Former Blue Ridge CEO John Reinhart was tapped to lead the company, taking over for Eclipse CEO and co-founder Benjamin Hulburt, who stepped aside. The company is now headquartered in Irving, TX, instead of State College, PA, where Eclipse was founded. Irving, also the headquarters of ExxonMobil Corp., had been the home of Magnum Hunter Resources Corp., the predecessor company that was reshaped by a bankruptcy and led to the eventual formation of Blue Ridge, which was taken private after emerging from those proceedings.

Montage’s 2019 production is forecast at 500-525 MMcfe/d. Pro forma, that equates to 16% year/year production growth. On its own, Eclipse averaged 343.2 MMcfe/d of production last year on a capital expenditures budget of $250 million.

“Our 2019 guidance demonstrates the strategic shift underway at Montage as we focus on financial, operational and organizational efficiencies in order to deliver value to our stakeholders,” Reinhart said. “We believe the quality and depth of the company’s inventory of locations will allow us to achieve double-digit production growth while focusing on cash flow generation in our highly economic core areas.”

Under Hulburt, who founded the company in 2011, Eclipse earned a reputation for a laser focus on driving efficiencies with super laterals, defined by the company as more than 15,000 feet, with some lengths of 20,000 feet-plus.

Montage said after the merger closed late Thursday its 2019 plans would see a shift in focus to reducing cycle times and improving capital efficiency in order to accelerate cash flow and achieve better returns. To do this, the company plans to optimize operations, including reducing planned lateral lengths to an average of 11,700 feet and lowering pad sizes to four wells each.

Full-year production is expected to consist of 76% natural gas, and 24% oil and natural gas liquids. The new company has a position of roughly 227,000 net acres in Ohio, Pennsylvania and West Virginia.

Montage’s credit facility has been amended with a borrowing base increase that takes it from $225 million to $375 million. The company began trading on the New York Stock Exchange under the ticker symbol “MR” on Friday, giving effect to a 15-to-1 reverse stock split that was expected to resolve a delisting notice Eclipse received from the market earlier this year.

The company is scheduled to release its 2018 earnings results March 12 and host a conference call with financial analysts the following day.