Privately held EdgeMarc Energy Holdings LLC said Wednesday it has filed for Chapter 11 bankruptcy protection in order to sell all of its Appalachian assets after a pipeline explosion last year in western Pennsylvania stranded production from its core assets. 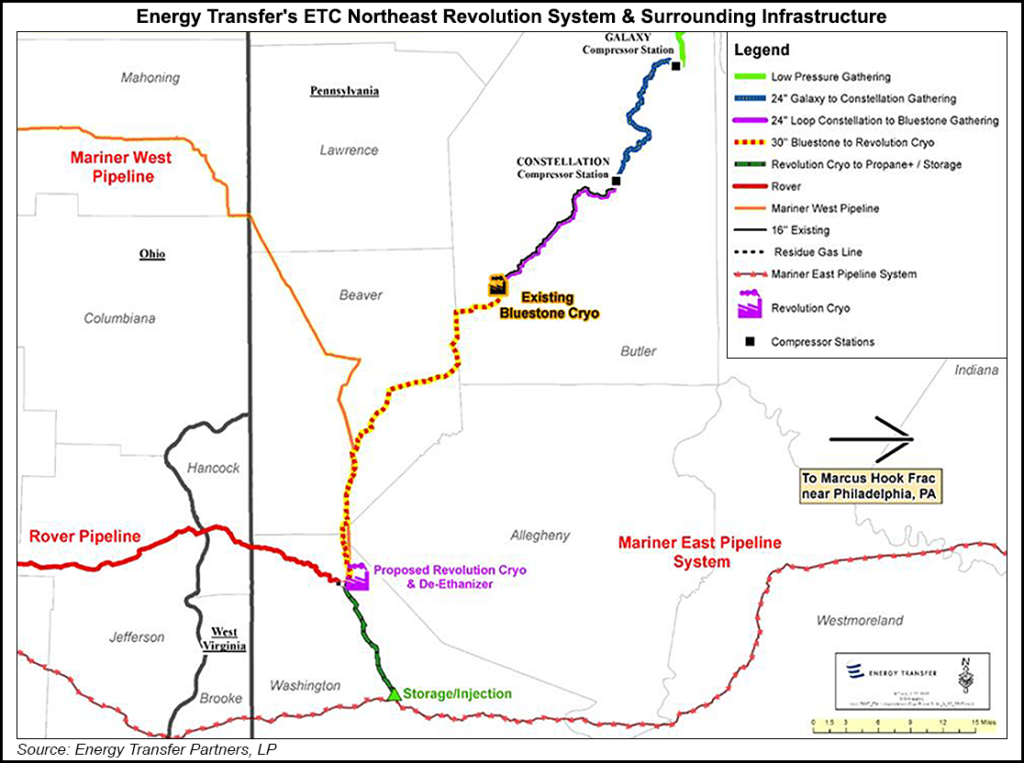 Since the Energy Transfer LP (ETP) Revolution Pipeline was knocked offline after the blast EdgeMarc’s production in Butler County, PA, has been “significantly curtailed,” preventing it from satisfying long-haul firm transportation contracts, CEO Callum Streeter said. The pipeline remains out of service.

“Following a comprehensive review of all possible alternatives to ensure the company’s long-term ability to develop our natural gas and natural gas liquids assets, the EdgeMarc board and management team have determined that a sale is the best path forward for all stakeholders,” said Streeter. “This process will provide the necessary resources and flexibility to resume normal upstream operating activities at our wells sites in Pennsylvania and Ohio.”

The company said it expects all of its operations and well sites that are not contracted on Revolution to operate without disruption during the bankruptcy process. Customers, lessors and employees are also not expected to be impacted during the proceedings.

EdgeMarc has already submitted auction procedures for the approval of the U.S. Bankruptcy Court for the District of Delaware. The company is aiming to sell all of its assets with an auction tentatively scheduled for Aug. 14. Founded in 2012, the company holds 45,000 gross acres in Butler County and parts of eastern Ohio. It had its start in western Pennsylvania, which has seen the bulk of its capital over the years.

“Despite the unfortunate challenges as a result of the explosion, our underlying business fundamentals remain sound,” Streeter said. “Pursuing a sale under the court’s supervision provides the quickest and most efficient path forward so we can return to doing what we do best — safely developing our high quality assets.”

The company has also secured $108 million in debtor-in-possession financing from its primary lender KeyBank to help it fund operations during the bankruptcy.

A 24-inch gathering segment that’s part of the broader Revolution System exploded last September, destroying a nearby home and toppling power lines in Center Township, about 30 miles northwest of Pittsburgh. ETP said torrential rain and saturated ground that plagued the region at the time likely caused the pipeline to slip and explode.

The Pennsylvania Department of Environmental Protection (DEP) in February suspended reviews of water permits and other pending approvals for ETP projects across the state, alleging the company failed to comply with an order to fix problems at the site following the explosion.

ETP has struggled to stabilize the area and repair erosion controls partly because of the area’s terrain, which has prevented service from restarting. Appalachia’s hilly landscape and wet weather has created problems for other pipelines in the region in recent years.

“We have engaged in productive discussions with the department and are already moving forward with a number of restoration activities,” said ETP spokesperson Alexis Daniel. “We will continue to work with DEP on the issues raised in order to move this forward to a complete resolution to restart the pipeline.”

As part of the state’s ongoing investigation, the DEP on Tuesday ordered ETP affiliate ETC Northeast Pipeline LLC to identify and restore or mitigate all streams and wetlands that it illegally eliminated or altered during the construction of the Revolution Pipeline, which came online last year ahead of the blast.