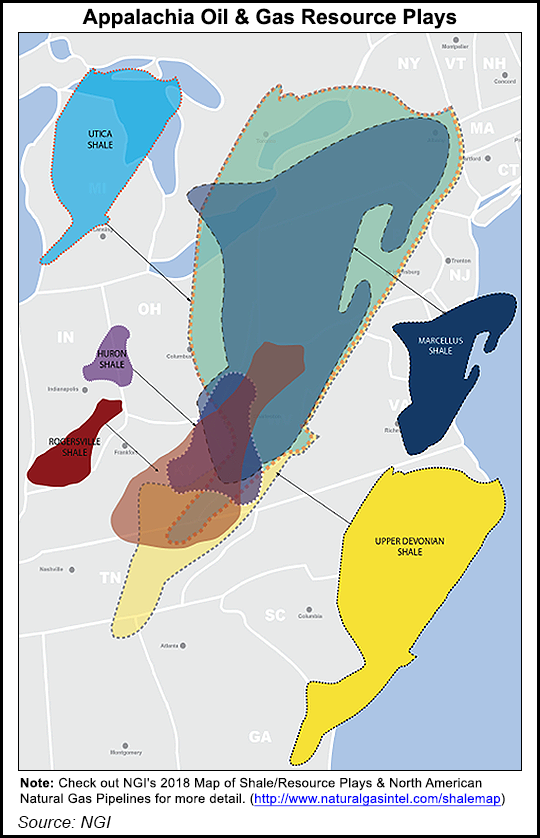 Higher natural gas prices were a positive for natural gas producers in the Appalachian Basin in 2021, but ongoing “uncertainties” threaten the industry’s long-term growth prospects.

“These include a number of challenges at the federal level being pushed by the Biden administration and some members of Congress, such as a punitive methane tax, and statewide issues such as Gov. Tom Wolf’s continued efforts to join the Regional Greenhouse Gas Initiative and a pair of rulemaking petitions by activist groups seeking to greatly increase the cost of well bonding,” President Daniel J. Weaver of the Pennsylvania Independent Oil and Gas Association (PIOGA) told NGI.

Weaver also said PIOGA is concerned about state and federal rulemakings to control volatile organic compounds and methane emissions, along with “continued opposition to pipeline expansion projects that limit our region’s ability to deliver natural gas to markets where it is needed.”

“There are more than 102,000 direct jobs tied to the natural gas and oil industry, supporting more than 480,000 jobs statewide when accounting for supply chain and ancillary positions,” he said.

A proposed $6 billion natural gas-to-liquids fuel plant in Luzerne County could add to the list of shale-driven investments that have helped to bolster Pennsylvania’s economy, noted Callahan.

He noted the industry has generated more than $2 billion in revenue for Pennsylvania since 2012 via impact fees that unconventional natural gas producers pay the state.

“Proceeds from the tax, called the impact fee, largely flow to communities in all 67 counties and support critical infrastructure, first responders, and environmental programs, to name a few,” said Callahan.

Callahan’s reference to how Pennsylvania government coffers generate revenue from unconventional gas producers segue into his broader point that “policies matter.” He said “embracing additional domestic energy production and use” could alleviate the impact of volatile energy prices.

“As we saw in Europe and certain regions of the U.S.” in 2021, “policies that favor the use of intermittent energy resources without proper baseload generating capacity…can lead to energy reliability challenges as well as significant price fluctuations,” said Callahan.

The U.S. Energy Information Administration (EIA) has projected that, although the contribution of renewables is growing, natural gas will continue to account for the largest share of domestic power generation capacity in 2022.

Callahan added that the role of natural gas should be acknowledged in the energy transition, which he pointed out “cannot happen overnight. As nations across the globe scale up decarbonization efforts, the affordability and reliability of abundant, clean American natural gas is vital to meeting this heightened demand without creating unforeseen and harmful consequences for communities and consumers alike.”

Callahan said the U.S. Environmental Protection Agency (EPA) “has even acknowledged” the role of natural gas in decarbonization. He referenced a February memo from the EPA’s Office of Air and Radiation stating “that the emission reduction goals set for 2030 in the Clean Power Plan have already been achieved.” He attributed the ahead-of-schedule feat to “the availability of natural gas.”

“Americans are facing their own reliability and affordability issues because we lack infrastructure to deliver these resources to where they’re needed and when they are needed,” Callahan said. “For example, Appalachian producers and leaseholders received nearly 25% less for their natural gas in 2021” against leading national index prices versus leading national index prices such as the New York Mercantile Exchange. He said the disparity “results in less investment to Pennsylvania and fewer royalty dollars for leaseholders.”

He observed that a dearth of pipeline infrastructure into the New York City region and across New England is costing gas consumers in those markets. New York City plans to ban new gas hookups in certain buildings starting in late 2023.

Chadsey told NGI that Ohio’s fleet of natural gas-fired power plants increased last year as facilities went online. The EPA recently projected that Ohio and Pennsylvania would add 4.8 GW of gas-fired power generation capacity from 2022 to 2025. Chadsey also pointed out that Utica Shale rig counts and permitting were on the rise in Ohio in 2021.

Baker Hughes Co. (BKR) reported that 11 rotary drilling rigs were running in the Utica at the end of 2021, up 83% year/year. NGI reviewed additional data from BKR showing 11 rigs operating in Ohio at the end of 2021, compared to a year-ago count of five.

Other recent developments in the Buckeye State have hinged on Covid, said Chadsey. For instance, he noted that curbs tied to the pandemic decreased demand for part of the year but then demand picked up “as restrictions and lockdowns were lifted and people started going back to work, school, and vacations, forcing a supply delay and increasing prices.”

Moreover, Chadsey said that OOGA witnessed a “dramatic and quick need for more personal protective equipment,” or PPE, as well as other products made from crude oil and natural gas.” Toward the end of 2020, management at midstream giant Enterprise Products Partners LP predicted continued strong demand for such products.

In 2021, the oil and gas industry represented a “cornerstone to West Virginia’s economy,” said Burd. He pointed out the industry is the Mountain State’s “top-paying sector,” supporting about 82,000 jobs and contributing $11.2 billion annually to West Virginia’s gross domestic product. GO-WV also reports the industry has generated $3 billion in state severance and property tax revenues since 2008, with $160 million created in fiscal 2020.

Given the oil and gas industry’s importance to the state, West Virginia’s treasurer is leading a coalition of states seeking more equitable treatment of fossil fuels companies by some financial institutions.

“West Virginia’s energy resources are a major contributor to America’s overall energy supply,” said Burd, adding that the most recent full-year oil and gas output data show double-digit growth. “Both natural gas and oil had record-breaking production years in 2020, increasing 14% and 10%, respectively, compared to 2019. And as production methods evolve and the industry expands in Appalachia, the energy produced here can help the U.S. and our allies reach shared energy and environmental goals.”

Burd said West Virginia’s oil and gas operators across the supply chain are also investing in new technologies and processes to “help mitigate and eliminate emissions, leaks, and surface disturbance” to bolster safety and environmental performance.

Burd said, “GO-WV’s members make it a priority to ensure the energy produced here is done so in the safest and most responsible way possible. We live and work here, too, and it is our goal to keep West Virginia wild and wonderful while at the same time providing world-class energy.”