With a bevy of larger Appalachian infrastructure projects slated to come online over the next three years to help move out nearly 20 Bcf/d, the midstream sector’s next challenge could be connecting them to more production fields in-basin, executives said last week at an industry conference in Pittsburgh. 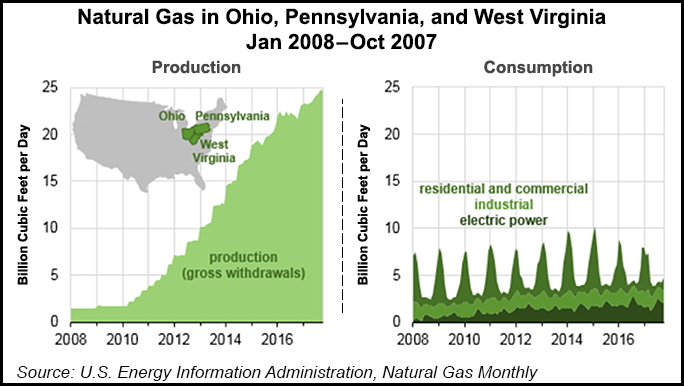 Most of Appalachia’s leading infrastructure projects have been producer-driven, and that’s likely to continue, albeit in a different way, said Eclipse Resources Corp.’s Dana Bryant, senior vice president of midstream and marketing.

Bryant said getting more production fields tapped into the larger projects is going to be key as they come online. “If we can get more access to them through the midstream systems, I would say that as production ebbs and flows, then we can better optimize the larger projects that are brought to the region,” she said at Hart Energy’s Marcellus-Utica Midstream Conference and Exhibition.

The concept is a no-brainer. However, speakers at the conference appeared focused on the idea of better connectivity. The infrastructure build-out continues and the basin is being “well shaped,” by larger projects that were designed to connect with even larger interstate systems, Eureka Midstream LLC COO Chris Akers said.

At the time Rover filed at the Federal Energy Regulatory Commission three years ago, there was “really no way” to reach systems like ANR and Panhandle Eastern from West Virginia, Woodward said. “About 2.2 Bcf/d of the 3.25 Bcf/d of Rover Pipeline capacity was needed interconnects to other pipelines a couple states away.”

The current build-out is also going to find producers exploring ways to meet the demand of local distribution companies (LDC) and other end-users along the way of new pipelines. Woodward said Antero is seeing just that.

“What we’re seeing is a lot of the people that are kind of in the middle of these long-haul pipelines between the Gulf Coast and Appalachia are stepping-up because the long-haul transport takes the gas from one end of the pipe to the other,” he said. “So, the guy in the middle sometimes gets left out. He has to kind of step-up and create his own destiny and say, ”hey, I want to be part of this.’”

Antero, one of basin’s largest producers, is testing some of that demand and ways to reduce firm transportation (FT) costs in the process.

“As additional infrastructure continues in the basin, we’re seeing that the cost is exceeding $1.00,” Woodward said. “And with current [benchmark] prices, it’s pretty tough for a producer to stomach the takeaway costs. I used to use the rule many years ago that you don’t want to spend more than 10% of the commodity value on FT, and needless to say, this basin has been very costly.”

Antero has “been talking to a number of utilities, various co-generation projects — the combined-cycle projects — trying to figure out ways to meet half way” on FT costs, Woodward said. He told NGI’s Shale Daily that the approach is novel, but it could boost revenues as more pipelines are built and demand increases.

“Historically, LDCs took out the firm transportation, and when there’s a development wave like what’s going on right now, the producers take it,” he said. “I think at some point there will be a compromise where some of that is shared, whether it’s in the transaction prices, or whether it’s in splitting the reservation fees, remains to be seen, but we’ll see how future projects evolve.

“I don’t know if there’s anything I can really say about discussions that are going on. We’re just excited to see new projects evolve to help move more gas out of the basin.”