U.S. natural gas producers are guiding toward 4.2 Bcf/d in output gains this year versus 2017, based on a survey of 50 of the largest onshore operators, but the biggest question is whether there will be enough takeaway capacity in the country’s two largest producing regions. 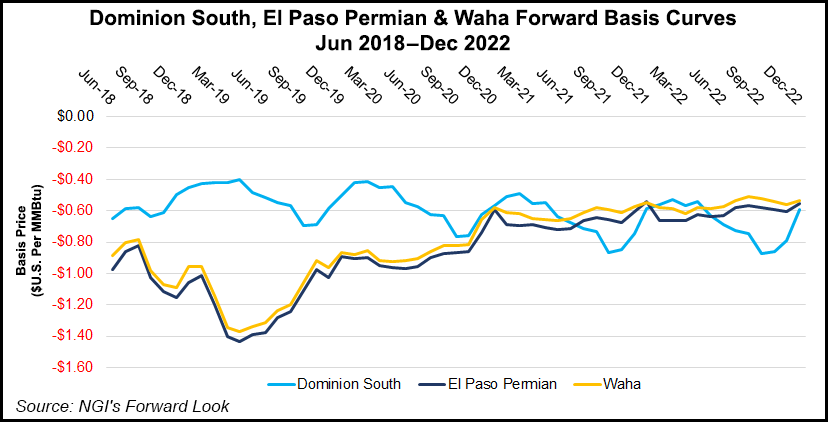 “In our balances, we are currently projecting 7.0 Bcf/d in total U.S. y/y production gains in 2018,” Seduski said. “Of that, 4.2 Bcf/d is projected to come from our sample based on the group’s published production guidance for the year. That leaves the 57% of production not in our sample to account for 2.8 Bcf/d in growth y/y.”

EA’s sample outpaces the rest of U.S. producers because of the inclusion of EQT Corp., now the largest U.S. gas producer, which is forecasting 1.1 Bcf/d growth y/y to 4.2 Bcf/d from its Appalachian-focused drilling.

Several E&Ps sampled also reevaluated their full-year 2018 production guidance after the first quarter results were finalized. The updates came after 2017 “saw a number of firms in our sample miss the guidance they had published at the start of that year,” Seduski noted.

Delays to Appalachian gas takeaway projects, including the first phase of Rover Pipeline and the late startup of Leach XPress and Rayne XPress, which each slipped into the first quarter, “likely contributed to production coming in under forecast amounts,” Seduski noted.

Some factors that contributed to missed first quarter projections are unlikely to affect the entire year, takeaway constraints should continue through 2018, “potentially placing the 4.2 Bcf/d y/y uplift from our sample in jeopardy.”

The biggest gas production revisions made during 1Q2018 from previous guidance were by Devon Energy Corp., “which produced only 1.0 Bcf/d of the 1.15 Bcf/d it had projected for 1Q2018,” Seduski said. “This comes after the company also missed its 2017 guidance by 0.54 Bcf/d that year.”

The Oklahoma City-based independent’s “underwhelming performance” followed declining returns in the once mighty and first great onshore gas formation, the Barnett Shale, where Devon’s output declined y/y by 28 MMcf/d to 0.47 Bcf/d. However, Devon also recorded a “near 50% drop” y/y in Eagle Ford Shale gas from 0.12 Bcf/d to 63 MMcf/d. The E&P reduced its 2018 gas guidance from a midpoint of 1.18 Bcf/d to 1.03 Bcf/d as a result.

Other U.S. E&Ps adjusted their guidance after smaller production misses.

Appalachia stalwart Eclipse Resources Corp. cut its full-year guidance midpoint from 0.24 Bcf/d to 0.23 Bcf/d “after it failed to clear a backlog of wells needing completion in the Utica,” Seduski noted. “EQT lowered its midpoint for 2018 guidance as well, by 14 MMcf/d, though this represents less than 1% of the producer’s 4.2 Bcf/d in projected output.”

Positive adjustments to full-year gas guidance also were seen in EA’s sample group, notably by Gulfport Energy Corp., which revised up to 1.2 Bcf/d from 1.15 Bcf/d from higher output expected in the Utica and Oklahoma reservoirs. Ultra Petroleum Corp. also “rode growing production in Wyoming’s Green River Basin to post y/y growth of 91 MMcf/d,” and it raised its midpoint for guidance by 14 MMcf/d to 0.79 Bcf/d as a result.

Appalachia again led domestic gas production gains in the first quarter, posting 4.5 Bcf/d in y/y growth, according to EA. Chesapeake posted gains of 60 MMcf/d in the Utica to 0.44 Bcf/d, and of 35 MMcf/d in the Marcellus to 0.87 Bcf/d. Southwestern’s Appalachian output climbed 0.4 Bcf/d y/y to 1.8 Bcf/d, while CNX Resources Corp. more than tripled its Utica volumes to 0.46 Bcf/d from 0.13 Bcf/d.

Lots of questions during first quarter calls also centered around Permian gas constraints, which E&P executives noted are linked to oil takeaway rather than gas infrastructure.

Anadarko Petroleum Corp. CEO Al Walker during the 1Q2018 conference call said of the Permian, “The ability to extract that gas into any market at a reasonable price is an objective of ours, in order to evacuate the liquids at the most economically available way we can.”

However, not every Permian gas producer expressed alarm about potential constraints.

Pioneer Natural Resources Co. and Apache each claimed to have enough gas transport options from the basin but stressed the need for more infrastructure to keep up with growth.

When asked during the first quarter call whether ConocoPhillips had concerns about Permian capacity constraints, CFO Don Wallette said, “No. We’re really not, and we don’t expect to either.”