Amid one of the coldest winters in 35 years and basis blowouts in recent weeks that recently drove the price of natural gas to unprecedented numbers, midstream companies are focused not just on new infrastructure, but more storage, and above all, more market outlets for producers, executives said Wednesday. 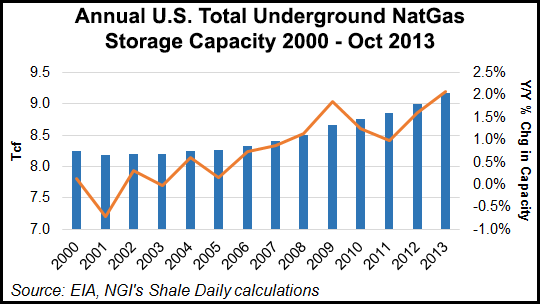 Three senior executives from companies with a strong footprint in the Marcellus and Utica shales discussed the need for more expansions in infrastructure and markets at Hart Energy’s Marcellus-Utica Midstream Conference in Pittsburgh.

Three core areas in the Appalachian Basin, stretching from northeastern to southwestern Pennsylvania and into eastern Ohio, are currently seeing some of the best economic returns of any oil and gas play in the country.

Between 2012 and 2014, the U.S. Energy Information Administration (EIA) has estimated that production in the basin increased by 8 Bcf/d, and the number is only expected to go higher, said DTE Energy Co.’s Peter Cianci, pipeline president.

“It’s impressive from the pure magnitude of it, as well as the slope,” Cianci said. “I continue to wait for it to decline, but I think that’s still many years off. It’s hard to tell where the top of overall production could be; 22 Bcf/d or 25 Bcf/d is not inconceivable.”

Although cold weather throughout January has driven a rally for gas prices in the Northeast this month, EQT Corp.’s Randall L. Crawford, president of midstream and commercial distribution for the Pittsburgh-based operator, said despite a lack of infrastructure, regional markets are oversupplied.

“We are all focused on prolific solutions to get this product in the Marcellus to market; it’s estimated that $20 billion will be invested on infrastructure through 2020,” Crawford said. “The punchline here, though, is producers need solutions to get gas, to market and it’s become much more important for Marcellus and Utica producers to have multiple options to market. No longer is it appropriate to rely on one outlet for your gas.”

By 2016, the Northeast likely is to become a net gas exporter, Cianci said, adding that “demand is already lagging production here.” Price spikes, seasonal demand and a balance with growing supplies, have forced midstream companies to focus on new markets and more storage capacity, as many companies and energy analysts have noted. Without expansions, producers might return to Gulf Coast production areas, EIA has noted (see Shale Daily, Jan. 7).

“On an average day the region will be a net exporter in 2016,” Cianci said. “The key point is at a peak demand of 40 Bcf/d, we need a lot of pipes going in a lot of different directions. Look at the price spikes we’re seeing; there’s a definite need for infrastructure to move gas to markets, but with the balance between production, supply and demand there’s still — for what I thought was dead — a strong need for storage and some of this gas needs to head back to other markets in the South and Midwest.”

According to EIA data and NGI’s Shale Daily calculations, underground natural gas storage capacity has been growing by roughly 1% to 2% over the last few years.

Midstream companies have struggled to build more infrastructure to serve the Northeast, but a dominant focus at the conference Wednesday was on southern markets, both in Pennsylvania and to Florida. Crawford said EQT Corp. formed EQT Midstream Partners LP in 2012 with a primary focus on serving third party producers looking to serve retail markets in the South and Midwest.

“You’ve got gas trapped in northeast Pennsylvania and it’s stuck at this point,” said UGI Energy Services Inc.’s Peter Terranova, vice president of midstream assets. “There’s heavy gas-on-gas competition and prices have been well below the New York Mercantile Exchange, with others lower than that on lines that aren’t that far away. If you can avoid the bottlenecks, you can do much better.”

Pennsylvania-based UGI, he said, is focused on a five-county region in southeast Pennsylvania and points further south.

“With the growing momentum in Philadelphia in a five-county area, natural gas will play a catalytic role in helping to grow southeast Pennsylvania — it’s another point where the stars will align,” he said. “Refineries in Philadelphia were recently saved by a couple of very large deals and Bakken crude is being transported there frequently. They’re looking for ways to get natural gas to Philadelphia.”

In the southeastern part of Pennsylvania, particularly areas near Philadelphia, consumers rely heavily on oil for heat, the EQT executive noted. The company estimates that as many as 300,000 residential customers could convert to gas and as many as 50,000 commercial customers could convert as well. The company, he said, has added more than 3 Bcf/year of volume for industrial users in the area since 2009.