Dry natural gas production from shale formations in the Appalachian Basin continues to be hot and is breaking records. 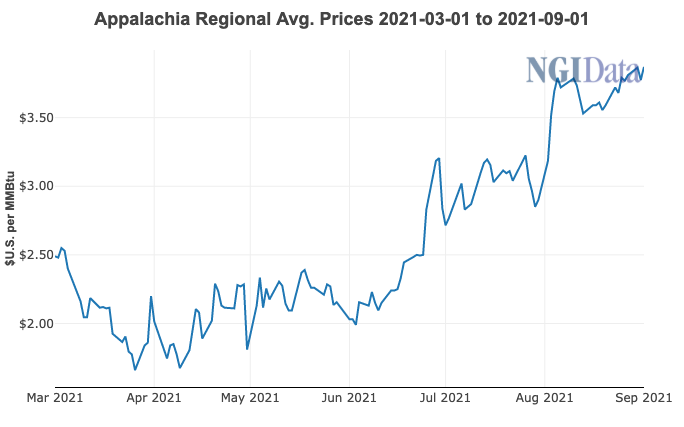 According to a note from the Energy Information Administration (EIA), production in the region reached 32.5 Bcf/d in December and averaged 31.9 Bcf/d during the first half of 2021. Researchers said it was “the highest average for a six-month period since production began in 2008.”

The Marcellus and Utica formations accounted for 34% of all U.S. dry gas production in the first half of this year, according to the EIA research team led by Corrina Ricker and Warren Wilczewski.

“On its own, the Appalachian Basin would have been the third largest natural gas producer in the world the first half of 2021, behind Russia and the rest of the United States,” they said.

In August, the EIA predicted that gas production would rise by 20 MMcf/d in September to 34.386 Bcf/d.

The EIA researchers attributed gas growth to pipeline takeaway capacity that allows production in the Appalachian Basin to reach other demand markets, especially in the Midwest.

“From 2008 to 2020, total pipeline takeaway capacity from the Northeast increased from 4.5 Bcf/d to 24.5 Bcf/d, alleviating some congestion and supporting higher wholesale natural gas prices in the region,” they said. Between 2014 and 2020, pipeline capacity increased by 16.5 Bcf/d, mainly headed to the Midwest.

Pipeline takeaway capacity from Appalachia to Canada, and to the Southeast, has also increased. Flows to the Southeast are also supporting growth in U.S. liquefied natural gas.

Still, the EIA researchers cautioned that while pipeline capacity from the Northeast has grown every year since 2014, the rate of increase “has slowed and recently has not kept pace with growth in regional production.”

MVP still awaits final approval from the Federal Energy Regulatory Commission to restart construction on the 303-mile, 2 million Dth/d pipeline. MVP has faced substantial delays since first receiving a certificate from the agency in 2017.