Sixty-seven percent of surveyed voters in Virginia said they support drilling for oil and natural gas resources off of their coast, according to a new poll conducted by Harris Interactive for the American Petroleum Institute (API). 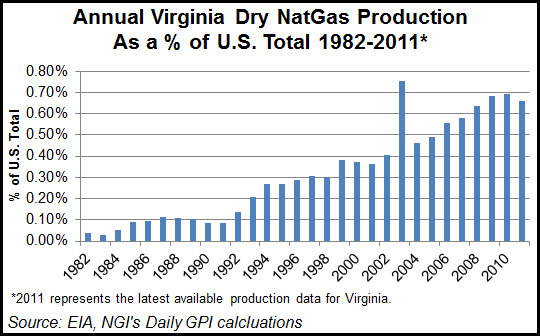 The support crossed party lines, with clear majorities of Republicans (81%), Democrats (52%) and Independents (71%) all in favor of drilling offshore Virginia. The telephone survey was conducted Sept. 24-29 by Harris Interactive on behalf of the API. It surveyed 616 registered voters in Virginia, with a sampling error of +/- 4%.

The Obama administration will soon begin work on its next five-year leasing plan in which areas of the Atlantic Outer Continental Shelf from Delaware to northern Florida could be made available for oil and natural gas leasing. Early next year, the administration is also expected to decide whether to permit seismic surveys in those offshore areas for the first time in 30 years.

In late 2008, the Interior Department under the Bush administration announced plans to hold the first proposed lease sale offshore Virginia in 30 years (see Daily GPI, Nov. 13, 2008). However, the lease sale, which was initially scheduled for 2011, never materialized under the Obama administration.

Earlier this year, House lawmakers renewed their push to open federal waters off the coast of Virginia to oil and natural gas development. The Virginia Jobs and Energy Act (HR 1782), which was introduced by Rep. Scott Rigel (R-VA), mandates that Lease Sale 220 be conducted within one year, and it requires that one additional lease sale be held in each subsequent five-year oil and gas leasing program. It also would allow for sharing royalties with coastal states that permit offshore development and it would create the Virginia Lease Sale Planning Area to give planning for future leases exclusively to the Commonwealth of Virginia. A companion bill has been introduced by Senate Republicans (see Daily GPI, March 1).

Virginia lawmakers in Congress and at the state level have pressured the Interior Department to open Virginia’s coastal waters to offshore development for years, but so far they have been unsuccessful (see Daily GPI, July 7, 2011). Ironically, in February 2005, the Virginia Senate and House of Delegates approved legislation that would have cleared the way for leasing, but it was subsequently vetoed by then-Gov. Mark Warner (see Daily GPI, April 8, 2005). Warner was elected to the U.S. Senate in November, where he now supports drilling offshore Virginia.

Virginia’s dry natural gas production has so far made up only a fraction of the nation’s total production, but the state’s piece of the production pie has grown steadily over the past two decades, from .08% of the U.S. total in 1991 to 0.66% in 2011, according to Energy Information Administration data.