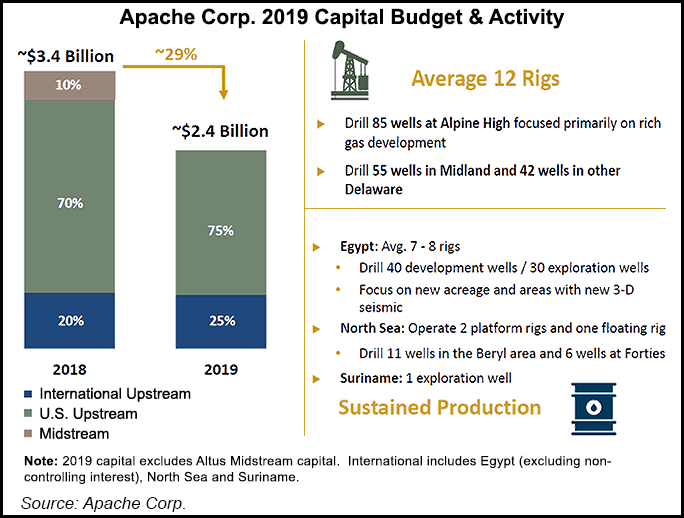 Developing the Alpine High in the Delaware sub-basin, the No. 1 prospect for the past couple of years, has allowed the Houston super independent to reset its options in other parts of the Delaware and its Midland twin going forward, Christmann explained to investors during a quarterly conference call Thursday.

“We did a lot of strategic testing both in the Midland and the Delaware. We focused on pad

development, what is the spatial relationship between wells both vertically and horizontally. We focused on completions…the use of technology, the learnings and the implementation of that. You’re now seeing that pay off in spades,” he said.

“You have to keep integrating those learnings. And you also have to recognize that the geology

of each play is a little different,” with the geology and reservoir the key components to optimizing development.

“That’s why this year we’re going to be running…two focus programs…There’s going to be a rich gas program at Alpine High, and you’re going to see an oil-focused program predominantly in the Midland and some Delaware.”

During the final three months of 2018, Alpine High gas volumes were impacted by a field-wide shutdown for several days, back pressure on gas sales lines from Permian constraints and completions timing. Production averaged 58,000 boe/d net between October and December, and the play’s output exited the fourth quarter producing 70,000 boe/d net. Twenty-six wells were turned to sale, bringing the total for the year to 94.

Oil-focused activities for now have been deferred in the gassy Alpine and other Delaware targets, Christmann noted.

“However, substantial future opportunity remains,” said the CEO. “Apache’s Permian Basin program has improved tremendously over the last three years. We’re now producing at record levels both in terms of total production and oil volumes. We have accomplished this with far fewer rigs and significantly less capital deployed than our prior production peak in late-2014.”
The focus in Alpine High this year is on multi-well pad development, primarily in the north flank of the field and primarily to produce natural gas liquids (NGL).

“With 600 MMcf/d of nameplate cryogenic processing capacity scheduled to come online in the second half of the year, we should realize a significant uplift in cash margins and cash flow generation,” the CEO said.

Activity in the play has been decreased to five rigs and one fracture (frack) crew. Dry gas drilling has been deemphasized, which is no longer needed for blending purposes to meet pipeline specifications once cryogenic processing is installed, he said.

“Prior to having the cryos coming on, we were…having to drill some of the dryer gas zones to blend to meet pipeline specs. We will no longer have to do that in 2019, 2020 and 2021.”
Reducing dry gas drilling “will naturally result in lower volume growth than previously projected, but it will increase our percentage of NGLs.”

“The projected year-end NGL mix will approach 40% of net Alpine High volumes, up significantly from the previous guidance of 30%, which we provided a year ago,” Christmann said.

Apache also achieved an “important strategic goal” last year with the formation of Altus Midstream Co., which will fund the growing infrastructure needs of Alpine High, he noted. Altus was created to hold most of Apache’s gathering, processing and transportation assets in the No. 1 prospect.

During the fourth quarter, Apache operated an average of 31 rigs and drilled and completed 98 gross-operated wells worldwide. More than half of the rigs (18) worked in the United States, where 70 wells were completed and where reported production was 283,000 boe/d, a 28% year/year increase.

Permian production averaged 236,000 boe/d in the final three months of 2018, including oil production of 99,000 b/d. Apache operated an average of 16 rigs and drilled and completed 66 wells.

At Alpine High in the Delaware sub-basin, Apache averaged seven rigs and placed 26 wells online. Production exited the year at 70,000 boe/d and averaged 58,000 boe/d in 4Q2018. Production volumes were impacted in late 2018 by several items, including an unplanned field-wide shut in, deferrals in the well completions schedule and the timing of new facility commissioning, which resulted in a “slight delay in the production volume ramp, but production was back on track by the end of the quarter.”

Apache also averaged 13 rigs across its international operations during 4Q2018 and completed 28 wells, with production of 199,000 boe/d.

Longer term to 2021, Apache envisions an annual upstream capital budget of $2.4-2.8 billion, a plan it outlined earlier in February. That level is about 23% under 2017 spending, with most of it directed to the United States.

The budget assumes $50-55 West Texas Intermediate (WTI), with cash flow neutrality at an assumed Henry Hub gas price of $2.80/Mcf and a WTI of $53/bbl. Plans are to return at least half of the generated free cash flow this year to shareholders.

“Permian Basin oil and Alpine High rich gas will be the primary drivers of U.S. production growth over this timeframe, with NGLs comprising the fastest-growing product stream,” Christmann said.

Through June, production is expected to be relatively flat with 4Q2018 volumes as the rig count declines and Apache implements a “three-month frack holiday, with one of our two frack crews in the Midland Basin,” said Executive Vice President Tim Sullivan of operations support. “We then see a fairly significant second half volume ramp resulting from the cryo commissioning at Alpine High, accelerated completions with the return of the second frack crew in the Midland Basin, and the start-up development in the North Sea.”

In the U.S. operations, a one-time impairment of $253 million was recorded for oil and gas properties primarily in the Anadarko Basin. In the offshore, a $90 million charge related to a legacy investment in a Gulf of Mexico-specific industry consortium related to oil spill emergencies.

Worldwide estimated proved reserves totaled 1.23 billion boe at year-end 2018, up from 1.17 billion in 2017. The company replaced 135% of 2018 production through extensions and discoveries, net of commodity price and engineering revisions. Proved undeveloped reserves represented 12%of total proved reserves at year-end, compared with 13% a year earlier.

Changes for 2018 primarily were driven by 303 million boe of proved reserves added through net extensions, partially offset by production of 170 million boe and downward revisions of previous estimates of 73 million boe.