Houston-based Apache Corp., one of the biggest natural gas producers in the Permian Basin, has ended routine flaring across its Lower 48 operations three months ahead of schedule. 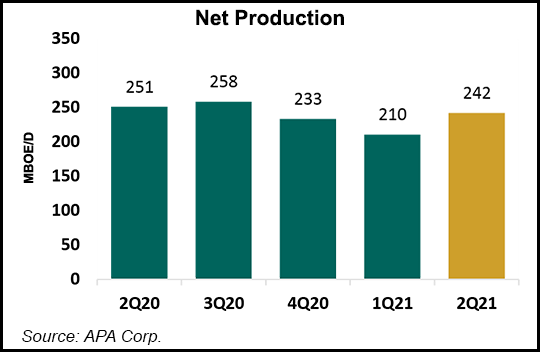 The independent had set a goal to end flaring in U.S. onshore by year’s end as part of its environmental, social and governance (ESG) initiatives.

“In early 2021, we set out to eliminate routine flaring in U.S. onshore operations as part of our broader efforts to continuously reduce our environmental footprint,” APA CEO John J. Christmann IV said. “We established an aggressive goal, and I am proud to announce we have achieved the goal ahead of schedule.

“We attained the goal through a concentrated effort, which included communicating clear objectives along with adding compression and optimizing facilities so more gas could enter the gathering system for sale.”

Future wells in the Lower 48, Christmann said, “will not be brought online without adequate gas takeaway capacity.”

The gassy Alpine High development in the Permian Delaware sub-basin of West Texas had been the explorer’s No. 1 global play. As gas prices stagnated and oil prices strengthened, more capital had been moved to Egypt, the North Sea and offshore Suriname.

The Permian assets remain a big part of the global portfolio, though. Until this year, Apache’s majority-owned Altus Midstream had invested more than $850 million in two natural gas systems to move Permian gas south, the Permian Highway Pipeline and Gulf Coast Express.

Apache also made firm transportation commitments on both systems to help underwrite and ensure their construction, management noted.

APA said the capacity investment was an “important and necessary element” to move gas to market, “thus significantly reducing flaring” for Permian operators.

“Our collective challenge as an industry is reducing emissions while continuing to deliver the abundant, reliable energy the world needs,” Christmann said. “We are committed to the responsible production of natural gas and oil and helping to elevate people around the globe to higher standards of living.”

APA noted that earlier this year it set ESG goals tied directly to incentive compensation for all employees. A “cornerstone” of the goals was to eliminate routine flaring in the Lower 48. APA said it is also tracking ahead of other U.S. onshore environmental goals this year. They include  overall flaring intensity of under 1% of gas produced and limiting freshwater consumption to less than 20% of total water use.